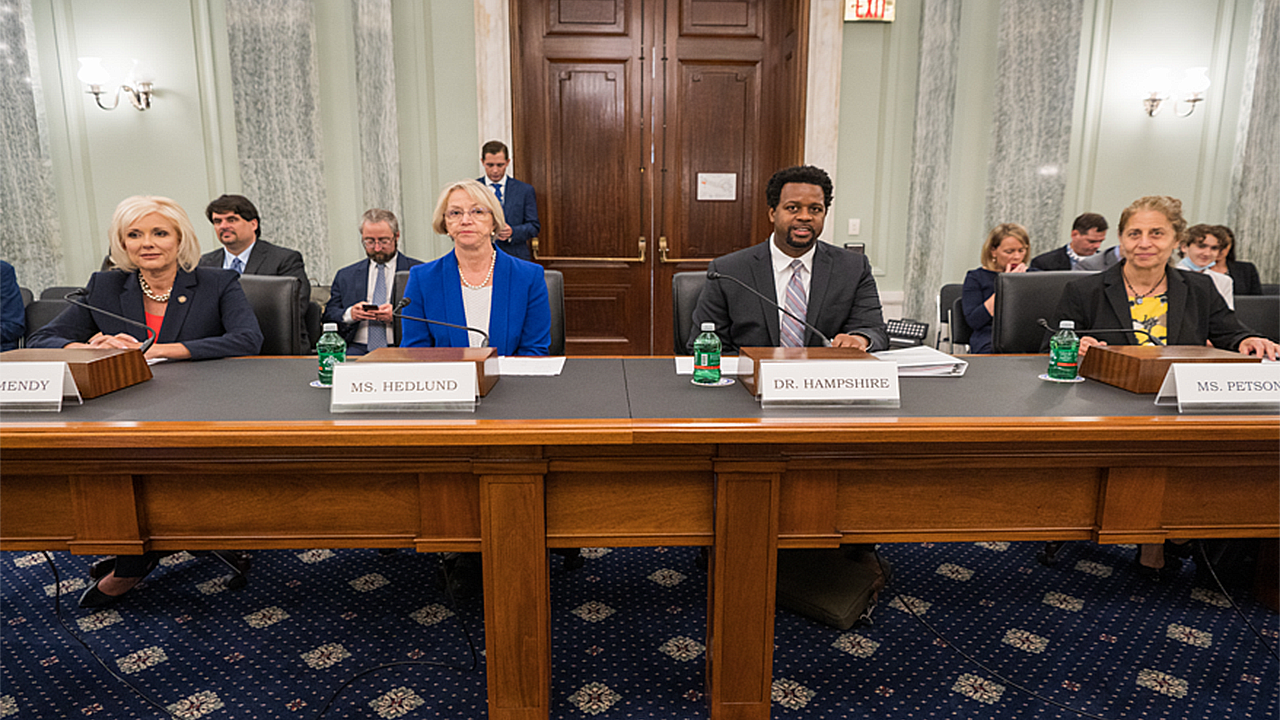 Karen Hedlund (second from left) at a June 24 preliminary Senate Committee on Commerce, Science, and Transportation hearing on her nomination to the STB, along with three other Biden nominees to other government posts.

OCT. 6, 2021 UPDATE: If Democrat Karen J. Hedlund is to become a member of the Surface Transportation Board (STB) and succeed Republican Ann D. Begeman, she is still waiting, even though the Senate returned from its August recess on Sept. 13. Utah Republican Mike Lee has once again blocked her confirmation. His probable cause is explained below.

Although the Senate Commerce Committee on Aug. 4 recommended that Hedlund be confirmed to a term stretching to Dec. 31, 2025, following her nomination by President Biden, Senate Majority Leader Chuck Schumer (D-N.Y.) failed to put her name forward for a floor vote. As explained below, the speculation that there is a “hold” on her nomination appears to be true.

Hedlund first learned of the hold following a marathon Senate session that stretched to 6 a.m. Aug. 11, the day the legislative body finally adjourned for a recess, owing largely to dozens of roll call votes on non-binding amendments to a controversial, but passed, framework for a Fiscal Year 2022 $3.5 trillion Democratic budget resolution whose specific spending provisions are now being fleshed out by individual Senate committees.

(The April nomination of Amitabha Bose to be Federal Railroad Administrator remains pending before the Senate Commerce Committee, which has yet to schedule a confirmation hearing. Jenifer Homendy was confirmed Aug. 10 to a second term expiring Dec. 31, 2024, on the National Mediation Board, where President Biden has designated her as chairman. For information on National Mediation Board nominations, see end of column.)

In addition to Begeman, who must depart the STB by Dec. 31, 2021 even if a successor is not confirmed—this owing to a statutory two-term limit—other STB members are:

Although President Biden can make a recess appointment absent Senate confirmation, such appointments are rare—just 13 in total since the 1887 creation of STB predecessor Interstate Commerce Commission (ICC). Notably, the Senate, may block the ability of the President to make a recess appointment by holding “pro-forma sessions” (only a few minutes long with neither votes taken nor business conducted)—a practice the Supreme Court in 2014 ruled a valid exercise of Senate power. This is unlikely, given Democratic control of the Senate and Hedlund being President Biden’s nominee.

Back to Hedlund: She became a political pawn of the Utah congressional delegation that supports a public-private partnership (P3) seeking to construct a new 85-mile intrastate railroad in Utah. The Uinta Basin Railway—a P3 of seven Utah counties, Drexel Hamilton Infrastructure Partners, and short line holding company Rio Grande Pacific—seeks to haul primarily crude oil extracted via fracking from the Uinta Basin to a Union Pacific Railroad connection at Kyune, some 60 miles southeast of Provo. Because the new rail line will connect with the national rail network, an STB certificate of public convenience and necessity must be issued before construction begins.

Hedlund’s problem is her relationship with STB Chairman Martin J. Oberman—to be explained shortly. Oberman has expressed concern as to the “financial viability” of the project and its “significant environmental impacts.” Because of that relationship, Hedlund’s Senate confirmation to the STB worries the project’s backers—and, hence, the supportive Utah congressional delegation—as Hedlund could potentially adopt similar views as Oberman.

Oberman does not currently oppose the project, but rather wants the STB to “seek additional information … in order to provide clarity on the uncertainties surrounding” its financial viability and environmental impact. In a January 2021 STB decision by Begeman (whom Hedlund would succeed) and Patrick J. Fuchs, in which both Republicans voted that the project meets a statutory standard for fast-track approval, Democrat Oberman dissented. At the time, there were two vacant seats now occupied by Democrat Robert M. Primus and Republican Michelle A. Schultz—neither of whom has had opportunity to cast a vote.

A date for the Board to finalize the project’s fate is not publicly known. Understandably, project backers would like to see Begeman, whose preliminary vote, as explained, favors the project, remain on the STB, although it is not known if she will continue in support. Upon Hedlund’s Senate confirmation, Begeman, whose second and final term has expired, must depart—or no later than Dec. 31.

The genesis of the Utah congressional delegation’s indigestion is that Oberman was a Chicago alderman when Hedlund, a contributor to Illinois Democratic politicians, was residing on West Junior Terrace in the city; and when Oberman was chairman of Chicago Metra, Hedlund represented clients in matters involving Metra. They developed a mutual professional respect for each other. Moreover, Oberman was instrumental in Hedlund’s nomination by President Biden, working through Illinois Sen. Dick Durbin, who holds the second-highest Senate Democratic leadership post and who promoted Oberman’s nomination to the STB.

At the Aug. 4 Senate Commerce Committee confirmation hearing on Hedlund’s nomination, committee member Sen. Mike Lee (R-Utah) was the lone negative vote on the majority’s recommendation that the entire Senate confirm her. Two months later, on Oct. 6 at 12:51 p.m. (according to the Senate Press Gallery), Sen. Tammy Baldwin (D-Wis.) spoke on nominations. She asked unanimous consent for the Senate to confirm Hedlund to the STB. Once again, Lee objected.

If Lee, or Utah’s other Republican senator, Mitt Romney, has placed a “hold” on the Hedlund nomination, her confirmation could be delayed indefinitely—such as until the STB issues its final vote on the Uinta Basin Railway project, although a date for that action is not known. A “hold” is a parliamentary procedure allowing a senator to prevent a motion from reaching a vote on the Senate floor. “Holds” on nominations are typically kept secret under Senate rules.

On Aug. 6, the STB Office of Environmental Analysis issued a Final Environmental Impact Statement for the project. The FEIS is just one step in a series leading up to a final decision. Previously, Senators Lee and Romney, and Utah congressmen Rob Bishop, John Curtis and Chris Stewart—also Republicans—wrote the STB in favor of the project’s approval.

It would be inappropriate and unethical for nominees facing a Senate committee considering their qualifications and whether to recommend them for confirmation to express an opinion on matters pending before the agency to which they are nominated. Hedlund did not nor has she previously. Had she indicated a predisposition, she rightfully could be asked to recuse herself from the vote if confirmed. Senators know that, but they also know they must indulge their constituency. A vote against Hedlund by Lee was showmanship. He knew the committee was going to recommend that her nomination proceed to the Senate floor for a vote. In fact, Hedlund’s experience at the FRA and in transportation consulting makes her more qualified for a seat on the STB than many who have been previously confirmed.

But were Senators Lee or Romney now to place a “hold” on the Hedlund nomination—so as to engineer Begeman’s sticking around to vote on the Utah project—it would be jack-booted thuggery and an unfortunate and unprovoked dagger aimed at Hedlund’s future. Yet it would not be the first time a nominee became a political pawn.

In 2015, Sen. Tammy Baldwin (D-Wisc.) placed a “hold” on the second-term nomination to the STB of Democrat Daniel R. Elliott III, writing then-Senate Majority Leader Mitch McConnell (R-Ky.) that “Wisconsin manufacturers, utility companies, the agriculture industry and countless small businesses” were unhappy with the STB’s handling of their complaints, while Elliott, in his first term, was STB chairman. Baldwin removed her “hold” following a meeting with Elliott—the substance of which was not revealed—and Elliott was then confirmed to a second term. There is neither suggestion nor evidence that Elliott improperly made any promises to Baldwin.

And in 1988, a “hold” was placed by Sen. Robert Stafford (R-Vt.) on the nomination of Karen B. Phillips to STB predecessor Interstate Commerce Commission (ICC). Stafford sought to delay Phillips’ confirmation to succeed Malcolm M.B. Sterrett, fearing her ICC vote on a condemnation project involving Amtrak in his state might be different than what he expected of Sterrett (although neither Sterrett nor Phillips had revealed intent). Once the Sterrett vote was cast—going as Stafford hoped—Stafford removed his “hold” on Phillips and she was confirmed.

This latest Senate mischief, now involving Hedlund, brings back in question just how independent is the STB. As I have written previously, former Sen. George A. Smathers (D-Fla.) observed in 1957 that an independent regulatory agency “is independent of everybody, except the President, the Congress, the courts, the Civil Service Commission, the Bureau of the Budget, and public opinion.”

There are consequences, however. As one does not write bad checks to the IRS, or insult family members of Mafia bosses, senators should think twice of annoying, through heavy-handed schemes, already sitting and future Board members. Justice may and should be blind, but judges are human, and there are 50 shades or more of grey areas in decision-making.

Other nominations of interest to railroads are of National Mediation Board (NMB) members. The renominations by President Biden of Republican Gerald W. (Trey) Fauth and Democrat Linda A. Puchala to the three-member agency are pending before the Senate Health, Education, Labor and Pensions Committee. Committee confirmation hearings have yet to be scheduled.

Although President Biden announced in April an intent to nominate Democrat Deirdre Hamilton to a seat held since November 2017 by Republican Kyle Fortson, the nomination has yet to reach the Committee. NMB members, by statute, remain in office until a successor is confirmed by the Senate.

Puchala is a former president of the Association of Flight Attendants. Fauth, a career transportation consultant specializing in rail regulatory issues, served as chief of staff to former STB member Wayne O. Burkes. Hamilton, currently a Teamsters Union Airline Division attorney, previously was employed in the law departments of the International Association of Machinists and the Association of Flight Attendants. Fortson was a Republican policy director for the Health, Education, Labor and Pensions Committee.

Frank N. Wilner is author of the soon-to-be-published “Railroads and Economic Regulation,” available from Simmons-Boardman Books, a Railway Age sister company. He earned undergraduate degrees in economics and labor relations from Virginia Tech and held a White House appointment as a chief of staff at the Surface Transportation Board. He is a career railroader, among whose positions was Assistant Vice President for Policy at the Association of American Railroads. He was an elected president of the Association of Transportation Law Professionals and a long-time editor of its publications.