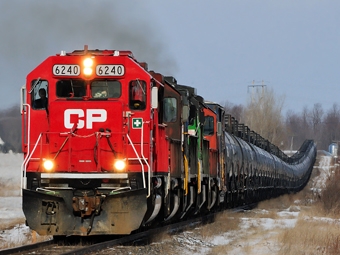 “The Board held a public hearing on Sept. 4, 2014, in Fargo, N.Dak., to provide interested persons the opportunity to report on rail service problems, to hear from rail industry executives on plans to address service problems, and to discuss additional options to improve service. Among other things, the Board directed representatives of CP to testify at the hearing to discuss ongoing and future efforts to improve service on its railroad and to provide an estimated timeline for a return to normal service levels. On Aug. 19, 2014, Chairman Elliott requested that each Class I submit a letter to the Board by Sept. 15, 2014, outlining the carrier’s expectation for the fall peak shipping season and its plan to address peak demand. Neither CP’s hearing testimony nor its Sept. 17 fall peak response contained the level of detail necessary for the Board to fully assess CP’s plans for resolving its service problems or responding to the fall service demand. T

“CP is directed to respond to the following requests:

“1. Provide a detailed plan that describes both the short-term and long-term steps CP is taking or will take to handle increased demand on its U.S. network, particularly in North Dakota, South Dakota, Minnesota, Iowa, Wisconsin, and Illinois (Midwest and central Northern region). This response should include information about, but not limited to, track and infrastructure projects, crew hiring, and equipment purchases (e.g., locomotives and cars) aimed at improving fluidity or increasing capacity and steps that are being taken to address severe weather events that might occur.

“2. CP’s peak season response letter states that it expects an increase in volumes of grain, automobiles, fertilizer, and intermodal, ‘in amounts that are in line with the seasonal traffic gains that are usually seen at this time of year.’ However, with respect to these peak volumes, CP’s response merely states that CP expects to have sufficient resources, locomotives, cars, and crews on hand to accommodate any increased traffic volumes and peaks that may occur, ‘to the extent of its ability to do so.’ Describe in detail the ‘extent of [CP’s] ability’ to meet peak season demand for grain, automobiles, fertilizer, and intermodal.

“3. Published reports have indicated that CP has eliminated or plans to eliminate 4,500 to 6,000 jobs by 2016, including jobs on its U.S. network. Similarly, CP’s reports to the Board indicate that employment numbers at CP’s U.S. subsidiary, Soo Line Railroad Company, dropped by more than 9% for train and engine employees, and by more than 29% for other employees, between January 2013 and August 2014. At the hearing, CP’s representative estimated that CP would hire 150 to 180 employees across its entire system, net of attrition. CP’s peak season response letter makes no mention of its specific hiring plans.

“4. At the hearing, several witnesses discussed difficulty in communicating with CP about service problems. Describe in detail CP’s processes for communicating service issues with customers, including a list of any call centers CP uses to ensure customers are able to contact CP by phone.

“5. At both hearings, CP cited congestion caused by a harsh Chicago winter as a significant cause of its service problems. State whether CP is currently a member of the Chicago Transportation Coordination Office (CTCO) and, if not, explain in detail how CP will coordinate its interchange of traffic at Chicago with other railroads, especially if operating conditions deteriorate during the peak season or over the winter.

“6. The implementation of CP’s sale of the Dakota, Minnesota & Eastern Railroad and the establishment of a new interchange between CP and Rapid City, Pierre & Eastern Railroad, Inc. (RCP&E) at Tracy, Minn., has been difficult. While there have been positive developments in terms of communication and equipment supply, there are also continuing problems in coordination between the two carriers. CP’s peak season response letter states that CP ‘has taken a number of additional steps for the benefit of RCP&E and its customers such as supplying additional grain cars, supplying additional locomotives, and running extra trains.’ Provide a detailed description of where these issues stand today and what additional steps CP can take to improve the flow of traffic with RCP&E.”