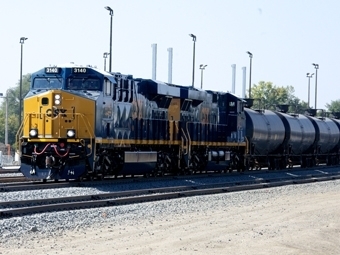 The U.S. Department of Transportation on Wednesday, July 23, 2014, issued a long-anticipated Notice of Proposed Rulemaking (NPRM) involving a new, stricter set of rules for crude-by-rail (CBR) train movements and other shipments of “flammable fuels,” designated as HHFT (high-hazard flammable trains). A 60-day comment period is now in effect.

The proposed rules—which contain several options and therefore are by no means definitive—cover train speeds, mandatory testing of oil and other products, and design standards for tank cars. Among other assertions, the proposed rule calls for older DOT-111 tank cars (pre-CPC-1232 cars, the rail industry’s voluntary standard in effect since October 2011) used for the shipment of Packing Group I flammable liquids, including most Bakken crude oil, to be retired within two years unless retrofitted to comply with updated standards.

“Today’s proposal represents our most significant progress yet in developing and enforcing new rules to ensure that all flammable liquids, including Bakken crude and ethanol, are transported safely,” Transportation Secretary Anthony Foxx said. He cited the record amount of CBR shipments related to North Dakota’s Bakken activity, noting the oil produced in that region “is on the high end of volatility compared to other crude oil.”

In addition to enhanced tank car standards, the NPRM also calls for a classification and testing program for mined gases and liquids and new operational requirements for HHFTs that include braking controls and speed restrictions. It seeks further information on expanding comprehensive oil spill response planning requirements for shipments of flammable materials. “Given the urgency of the safety issues addressed in these proposals, PHMSA (Pipeline and Hazardous Materials Safety Administration) does not intend to extend the comment period,” DOT said.

A fourth option is a 50 mph limit for HHFTs in which all tank cars meet the yet-to-be determined standards. The fifth option is a 30 mph restriction for HHFTs that do not comply with possible “enhanced braking requirements.”

The NPRM “proposes to require all HHFTs to be equipped with alternative brake signal propagation systems. Depending on the outcome of the tank car standard proposal and implementation timing, all HHFTs would be operated with either electronic controlled pneumatic brakes (ECP), a two-way end of train device (EOT), or distributed power (DP).”

• Tank Car Option 1 would have 9/16-inch steel, would be outfitted with electronically controlled pneumatic (ECP) brakes, and would be equipped with rollover protection.

• Tank Car Option 2 would also have 9/16-inch steel but would not require ECP brakes or rollover protection.

• Tank Car Option 3 is based on the 2011 CPC-1232 industry standard and has 7/16-inch steel, and does not require ECP brakes or rollover protection.

DOT also “proposes to require existing tank cars that are used to transport flammable liquids as part of an HHFT be retrofitted to meet the selected option for performance requirements. Those not retrofitted would be retired, repurposed, or operated under speed restrictions for up to five years, based on packing group assignment of the flammable liquids being shipped by rail.”

• Defining the term “high-hazard flammable train” (HHFT). DOT proposes a definition of an HHFT as “a train carrying 20 or more tank carloads of flammable liquids (including crude oil and ethanol).”

• Better classification and characterization of mined gases and liquids. DOT proposes “development and implementation of a written sampling and testing program for all mined gases and liquids, such as crude oil, to address frequency of sampling and testing; sampling at various points along the supply chain; sampling methods that ensure a representative sample of the entire mixture; testing methods to enable better analysis, classification, and characterization of material; statistical justification for sample frequencies; and duplicate samples for quality assurance. Offerors would be required to certify that a sampling and testing program is in place, document the testing and sampling program, and make program information available to DOT personnel, upon request.”

• Rail routing risk assessment. DOT proposes “that carriers be required to perform a routing analysis for an HHFT that would consider 27 safety and security factors and select a route based on findings of the route analysis.” • Notification to State Emergency Response Commissions. DOT proposes “to codify DOT’s May 2014 emergency order that requires trains containing one million gallons of Bakken crude oil to notify State Emergency Response Commissions (SERCs) or other appropriate state delegated entities about the operation of these trains through their states.”

Class I railroad executives and other industry officials have expressed concern over speed limits that could hamper transport efficiency and, as a secondary impact, affect Amtrak long-distance passenger service, such as occurred last winter with Amtrak’s Empire Builder. Others, including environmental groups, have strongly urged speed restrictions be strictly enforced.

Pressure has grown during the past 12 months for improved handling of CBR products, triggered in large part by the crash and explosion of a train in Lac-Mégantic, Quebec, on July 6, 2013, which killed 47 people. Since then, other incidents, though less severe, have generated media attention and subsequent congressional hearings.

Improved tank car safety also has been made a priority by many, including the Association of American Railroads (AAR). AAR President and CEO Ed Hamberger last month detailed the many steps freight railroads are taking to boost the safety of moving crude oil by rail. Last February the Railway Supply Institute Committee on Tank Cars (RSICTC), in a letter to Secretary Foxx, urged DOT to expedite new safety measures for tank cars carrying crude oil and ethanol.

In response to the NPRM, AAR’s Hamberger said, “While AAR is examining the details of the proposed rulemaking and will provide full comments at a later date, this long-anticipated rulemaking from DOT provides a much-needed pathway for enhancing the safe movement of flammable liquids in the U.S. Railroads are playing a critical role in our country’s progress toward energy independence, moving more energy products like crude oil and ethanol than ever before. The fact that the proposed rule incorporates several of the voluntary operating practices we have already implemented demonstrates the railroad industry’s ongoing commitment to rail safety. We look forward to providing data-driven analyses of the impacts various provisions of the proposal will have on both freight customers and passenger railroads that ship millions of tons of goods and serve millions of commuters and travelers across the nationwide rail network every day.”

The RSICTC issued the following statement: “Since its inception, the Railway Supply Institute Committee on Tank Cars has been the leading advocate of the safe transportation of hazardous materials by rail. It is that history of unique expert knowledge that has allowed RSICTC to provide the U.S. Department of Transportation with our recommendations on a comprehensive proposal for all new and existing tank cars transporting flammable liquids in North America. It is our long-standing commitment to safety that will now drive our analysis of the recently published Notice of Proposed Rulemaking (NPRM) and Advanced Notice of Proposed Rulemaking (ANPRM). After full review of the details contained within the NPRM and ANPRM, RSICTC will prepare and submit comments to PHMSA in the normal course of the rulemaking process.”

The Greenbrier Companies, like all tank car builders, has been anticipating a definitive rulemaking from PHMSA and FRA.

“While Greenbrier is examining the details of the proposed rulemaking and will provide full comments at a later date, we are pleased that Secretary Foxx recognizes the urgency of completing this rulemaking and we commend his stated intention to issue a rule in the next 60 days,” said Vice President External Affairs and Communications Jack Isselmann. “A final rule will provide the clarity the industry needs to make investments that ensure that crude oil and other flammable commodities are classified properly and transported in tank cars that are safer at any speed. We are also gratified that two of the three alternate new design standards proposed by the DOT call for a 9/16-inch thick steel shell, a safety feature that Greenbrier has consistently championed with our next generation ‘Tank Car of the Future’ design. This design can better withstand the additional demands associated with operating unit trains like the high-hazard flammable trains identified today. A two-year timetable for phasing out the use of older DOT-111 cars in the most hazardous flammable service is aggressive, but can be achieved through a combination of increased new tank car production and appropriate retrofit packages for tank cars that meet a more robust safety standard. Greenbrier is prepared to meet the need for tank car retrofits with our newly-launched joint venture for railcar repair and retrofitting, GBW Railcar Services. We look forward to continuing to share our views with the DOT during the comment period to ensure that the final rule meaningfully enhances public safety while protecting the competitiveness of America’s rail network and the many jobs that depend on it.”

The American Petroleum Institute rebutted what it calls “speculation by the Department of Transportation about the characteristics of crude oil from the Bakken.”

“The best science and data do not support recent speculation that crude oil from the Bakken presents greater than normal transportation risks,” said API President and CEO Jack Gerard. “Multiple studies have shown that Bakken crude is similar to other crudes. DOT needs to get this right and make sure that its regulations are grounded in facts and sound science, not speculation.”