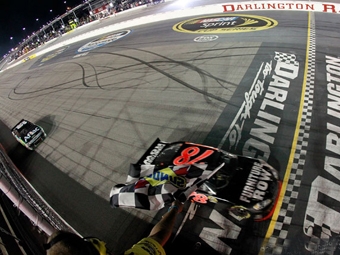 For the fourth time in the 2012 NASCAR Sprint Cup season, Regan Smith’s Furniture Row Racing no. 78 Chevrolet Impala will carry the CSX Transportation “I BRAKE FOR TRAINS” bumper sticker, and the team’s pit box and crew uniforms will carry that same theme.

“I BRAKE FOR TRAINS” and CSX’s associate sponsorship of the 78 is central to the railroad’s “Play it Safe Around Railroad Tracks” public safety campaign to urge pedestrians and motorists to exercise caution around railroad tracks. Smith and his team head to historic Darlington Raceway, South Carolina, to defend their thrilling victory in last year’s Southern 500.

“We’re excited to return to Darlington with Regan Smith and the Furniture Row Team,” says CSX Transportation Director-Corporate Communications Gary Sease. “His win last year at the track ‘Too Tough to Tame’ was one of the great feel-good stories from the 2011 season. The higher profile that Regan is getting this weekend as the Southern 500 defending champion is also creating an excellent platform to get our message out to Play it Safe Around Railroad Tracks.”

This is the first time in his budding NASCAR career that Regan Smith enters a Sprint Cup race with the status of being the defending champion. The 28-year-old driver for Denver-based Furniture Row Racing became a first-time winner one year ago on Mother’s Day weekend, scoring a hard-fought victory in one of NASCAR’s premier races—the Southern 500.

“Defending champion—I like the sound of it,” says Smith about his moniker heading into Saturday night’s Bojangles Southern 500. “I felt at this time last year that we were getting closer to that elusive victory, and then it came at Darlington—and what a place to win your first race! The history, the prestige, the difficulty—Darlington has it all and to say you won there is truly special.”

“Last year’s victory at the daunting 1.366-egg-shaped oval that carries the ominous nicknames ‘Too Tough To Tame’ and ‘The Lady in Black’ not only elevated Regan’s stature in NASCAR’s premier series, but did the same for our single-car Furniture Row Racing team, the only Sprint Cup team based west of the Carolinas,” a team spokeperson says. “Regan doesn’t have to pinch himself as a reminder of being a Darlington winner. He just has to look at one of the most unique trophies in motorsports. His engraved photo, along with all the other Southern 500 champions, is on the three-foot, 40-pound Johnny Mantz trophy.”

“When your photo is on the same winning trophy with the faces of Richard Petty, Dale Earnhardt Sr., David Pearson, Cale Yarborough, Jeff Gordon, Bobby Allison, Bill Elliott, Darrell Waltrip, Jimmie Johnson, and many more NASCAR icons, you know you accomplished something special,” notes Smith. “I would rather win the Southern 500 than the lottery.”

How did the underdog Smith tame one of NASCAR’s toughest tracks to score his maiden victory while running on well-worn tires in the final 11 laps? “He simply refused to get passed,” says Furniture Row Racing crew chief Pete Rondeau, who made a calculated call not to pit for fresh tires late in the race.  Rondeau’s bold decision to forego the pit stop resulted in Smith’s No. 78 Chevrolet moving from sixth to first in track position. With the lead and clean air in front of him, Smith held off his challengers in both of the final two restarts and crossed the finish line 0.196 seconds ahead of Carl Edwards, who—despite four fresh tires—could not overtake Smith. The final lap presented a tense moment when Smith scraped the infamous Darlington wall in turn two, “but the chances of me checking up there were about zero,” Smith said in post-race interviews. (CLICK HERE TO SEE VIDEO FOOTAGE OF SMITH’S 2011 DARLINGTON VICTORY.)

Smith heads to Darlington with the goal of snapping out of a four-race slump. “We need to have a positive weekend in our Furniture Row/CSX Play it Safe Chevrolet,” he says. “As I said after Talladega, we’re in a partial slump and in a partial bad-luck streak.” At the May 6 race at Talladega Superspeedway, on Lap 15 of the scheduled 188-lap race, Smith was forced to park the 78 due to an engine failure. He finished 40th, his worst result of the season. “Nothing has seemed to click lately,” said Smith, who has dropped from 18th to 27th in driver points in the past four races. “We need to forget about the past, look forward, and start to turn things around. We’re a team that came into the season with high expectations, and right now we’re not delivering.”

Thanks to the sponsorship of PTMW, Inc., Railway Age Editor-in-Chief William C. Vantuono will be on the scene for Saturday night’s Southern 500. “Few things would thrill me more than to see Regan take the checkered flag at Darlington, or at the very least, bring the Furniture Row Racing/CSX Play It Safe Chevrolet home to a top-10 finish,” says Vantuono. “Let’s hope that the 78’s Earnhardt Childress Racing race motor performs as reliably and as consistently strong as the diesel powerplants in CSX’s GE or EMD road locomotives.”

“We look forward to this weekend’s Sprint Cup Race at Darlington, where Regan Smith will defend his first ever Cup win last year,” says PTMW, Inc. President and Owner Patti Jon Goff. “As a woman-owned business, we at PTMW are all excited to see how the ‘Lady in Black’ tests the skills of all of the boys and spreads the important message to ‘Play It Safe Around Railroad Tracks.’”

Stay tuned to this website to keep pace with Regan Smith and his exploits both on and off the racetrack and with CSX’s innovative Play It Safe public safety program.

Website sponsor PTMW, Inc. (www.ptmw.com) is a full-service, world-class OEM metal fabrication and assembly facility that has been supplying the railroad industry with custom-designed products such as wayside signal equipment housings for nearly 30 years. PTMW is a certified WBE (Woman-owned Business Enterprise) and is also ISO 9001 certified. The company is headquartered in Topeka, Kansas.