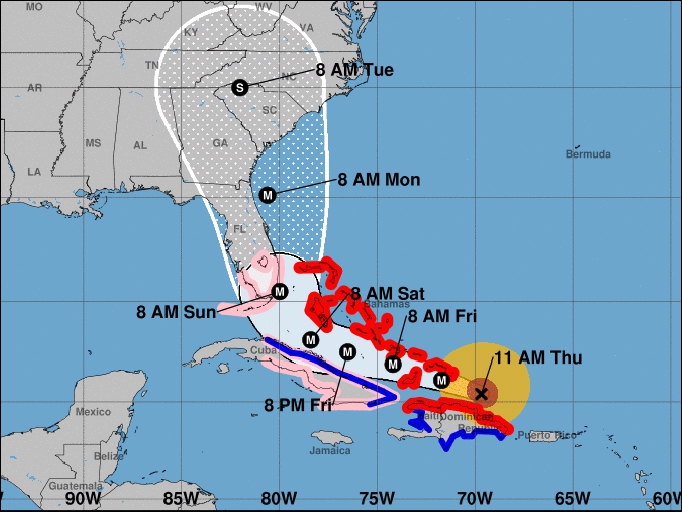 Railroads serving Florida and the Southeast coastal region are making preparations ahead of Hurricane Irma, which is forecast to make landfall along South Florida and move up the East Coast.

The Federal Railroad Administration on Wednesday declared an “emergency event” for all freight railroad operations. Acting FRA Administrator Heath Hall called the storm “extremely dangerous” and advised “preparations be rushed to completion in the hurricane warning area.” The state of Florida declared a pre-emptive state of emergency for all 67 counties. Hall activated the FRA’s Emergency Relief Docket granting waivers for certain FRA regulations during and after the storm. Also, the Surface Transportation Board postponed the Sept. 12 public listening session, regarding CSX service issues.

Norfolk Southern in a service announcement said traffic en route to the region will be held at various yards throughout its system in an effort to alleviate congestion in the affected regions. The railroad is in the process of issuing embargoes for these locations. Its Engineering unit is staging resources, including ballast trains, equipment, and generators, and will begin storm recovery efforts once it is safe to do so.

“Norfolk Southern will be working with customers in these areas to identify switching needs and service curtailment. Customers with questions regarding local service should contact their Operations and Service Support, Unit Train, Automotive, or Intermodal representative,” it said.

CSX said it is taking precautionary measures to protect employees, rail traffic and infrastructure while it monitors the storm. “All necessary actions will be taken as conditions warrant, including relocation of personnel, and rerouting rail cars and locomotives out of areas in the projected path of the hurricane. Customers with freight moving through impacted areas will be advised of any potential delays.”

Amtrak has temporarily suspended services in Florida. The Miami-New York Silver Star (92) and Silver Meteor (98) are cancelled for Sept. 9-11. Silver Star 91 (New York-Miami) will operate from New York City to Orlando on Sept. 7. Silver Meteor 97 (New York City-Miami) will operate from New York to Jacksonville, Fla. Trains 91 and 97 are cancelled for Sept. 8-10.

Florida-based FEC Railway continues to monitor the path of the hurricane. On Sept. 7 the railroad will operate southbound mainline train 101, and northbound 202 and 222. Local service changes will be communicated individually to the affected customers. On Sept. 8 local and mainline service is suspended.

Commuter operator Tri-Rail, which operates from Miami north to Mangonia Park, will suspend all services as of Sept. 8 until further notice.