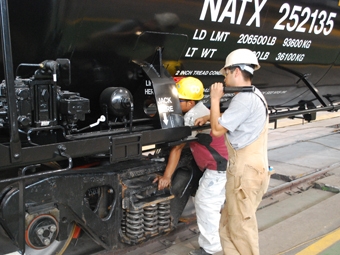 Shares of The Greenbrier Companies and Trinity Industries fell 10.2% and 7.7%, respectively, in afternoon trading on Wednesday, Oct. 1, 2014, one day after the deadline for final comments on the U.S. DOT Pipeline and Hazardous Materials Administration’s Notice of Proposed Rulemaking on tank cars carrying flammable liquids. Wall Street analysts attributed the stock plunge (which also affected American Railcar Industries, down 5.8%) to investor wariness over an “oil tank car rule fight.”

“Greenbrier and other railcar makers sold off hard after oil and railroad industry trade groups asked for more time to retrofit old cars to transport extremely flammable crude from tar sand plays,” wrote Gillian Rich of Investor’s Business Daily. “The American Petroleum Institute and the Association of American Railroads are asking [PHMSA] for three years to build new railcars (DOT-116 cars) vs. the two years that PHMSA proposed in July 2014. API President Jack Gerard says that the government’s aggressive timeline ‘could harm consumers by disrupting the production and transportation of goods that play major roles in our economy, including chemicals, gasoline, crude oil, and ethanol.’”

AAR and API want six years to retrofit newer CPC-1232 cars, which meet a voluntary industry safety standard implemented in October 2011. Older, so-called “legacy” DOT-111 cars should be given priority, and retrofitted within three years. Greenbrier believes that PHMSA’s two-year timetable for new cars is “tight but achievable,” and has also invested heavily to retrofit about 2,000 cars per year vs. 600 today.

Greenbrier based its NPRM comments on the PHMSA rulemaking on its Tank Car of the Future, which is essentially a specification developed by BNSF, the railroads’ largest transporter of crude oil. Its design, which is in line with PHMSA’s Option 2 specifications, features 9/16-inch-thick tank shells; the company claims these cars can carry the same volume of crude, 30,000 gallons, as legacy DOT 111s. AAR and API, in contrast, are asking for 1/2-inch-thick shells for new cars, with a 1/8-inch-thick jacket and thermal protection. Full-height head shields are recommended in either case. Comments submitted by the Railway Supply Institute Committee on Tank Cars (RSI-CTC) are, for new-builds, consistent with PHMSA Option 2 and Greenbrier, but differ from both AAR/API and Greenbrier with regard to retrofits or phase-outs of older equipment.