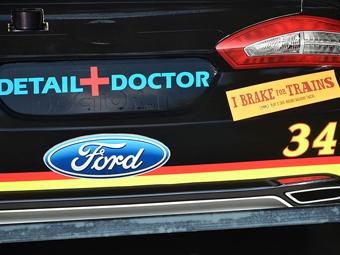 David Ragan, driving the No. 34 Taco Bell/CSX Play It Safe Ford Fusion, earned a top-25 finish Sunday, Aug. 11, at the Cheez-It 355 at Watkins Glen International, one of the NASCAR Sprint Cup Series’ always-tricky road course races. Aside from the normally uncommon right-hand turns, the day also brought some other challenges, including overheating and dodging wrecks.

The No. 34 Taco Bell/CSX Play It Safe Ford Fusion started in 31st position. Ragan moved up to 27th when he reported his coolant and oil temperatures were getting hot, forcing an unscheduled pit stop on Lap 21 to clean grass off the grille and putting the Front Row Motorsports team on an off-sequence cycle. From there, the team worked to tweak the car’s handling throughout the day as Ragan persevered and hung tough around the top-25 mark for much of the afternoon.

As the race entered its final 10 laps, a multi-car wreck in Turn 4 gave the No. 34 some damage, forcing another unplanned stop. The pit crew made quick repairs and sent Ragan back out in 25th. The race saw one final multi-car wreck with just five laps to go. This time Ragan—who usually performs exceptionally well on superspeedways (he won earlier this year at Talladega)—avoided the trouble, enabling a final push on a restart with three laps remaining. He crossed the line for a hard-fought 21st-place finish for his best career result at Watkins Glen.

“It was a pretty crazy race as always,” said Ragan. “We had a pretty fast car. We got involved in one of those late-race accidents and had to come back down pit road. We didn’t have a lot of damage and we still came away with a decent finish, and we raced hard. I think if we had five or six of these road course races a year, we’d get a better hang of it. But as soon as we get rolling, we take a break and then don’t come back to one until June of next year. But we had a good day and we’re ready to move on to Michigan next week.”