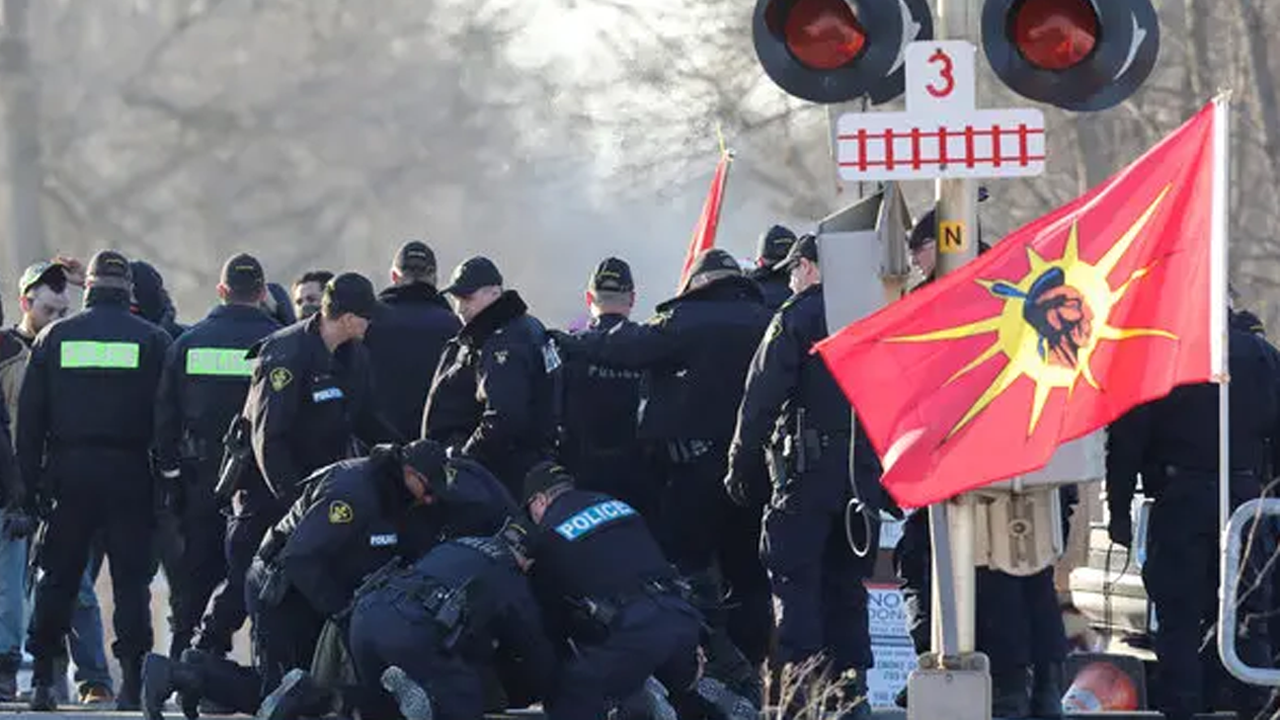 Police officers making an arrest during a raid on a Tyendinaga Mohawk Territory camp near a CN grade crossing in Tyendinaga, Ontario, on Feb. 23 Photo by Chris Helgren/Reuters

The mining giant—Canada’s biggest rail shipper—noted in its cancellation statement Feb. 23 that there is simply no prospect for mining and moving more bitumen from Alberta’s tar sands: “It is now evident that there is no constructive path forward for the project.”

True, the rush of global investment bankers to shun new coal and oil development would have starved all new tar sands projects no matter what. But the absence of any viable way to get additional bitumen to market blows up the spreadsheets before they even come under the climate-spooked gaze of investment bankers.

First, the federal government reluctantly crippled the country’s rail network with emergency slow orders to mute a staccato of winter-related oil-train derailments. Then, a tiny alliance of anti-pipeline First Nations people and climate activists managed to shut down CN’s transcontinental main line with a few shipping pallets and a burning tire.

Perhaps the federal government (while quietly encouraging CN and Canadian Pacific to route trains through detours on each other’s tracks) were expecting “ordinary” Canadians to rise up against the blockades. Instead, public sympathy remained stubbornly on the side of the natives and climate activists. Even rail customers were muted in their lamentations, fearing that they would become social media targets should they side with the very petroleum shippers who were wrecking the normal movement of grain and containers.

In the meantime, Teck’s dispatches of metallurgical coal from mines atop the continental divide separating Alberta and British Columbia were being strangled by anti-pipeline blockades at the Pacific Coast. Mainstream-media reports (made all the more credible by Alberta government denials) are that Teck feared further engagement in the tar sands would make its coal operations the next target of climate activists.

With a succession of U.S. Presidential Administrations either unwilling (Obama) or unable (Trump) to force the Canadian Keystone XL pipeline upon resistant Native Americans and farmers, it became apparent to Teck (and anyone other than Alberta’s oil-addled premier Jason Kenney) that there is simply no bankable way to ship additional bitumen across the border.

Kenny is now promising to legislate against any disruption of rail traffic—pointless bravado when it is already criminal to block trains, and when exactly none of the blockades were in Alberta anyway.

Crude-by-rail has been a huge problem for Canadian railways, which by regulatory law must continue to shunt suspect trains across the border for their U.S. counterparts to deal with. After two CP trains consisting of brand-new tank cars derailed and caught fire in Saskatchewan this winter (and a CN train breached but did not burn in Ontario), it is now evident that the old DOT-111 tank car most likely wasn’t the culprit in the succession of oil train wrecks and explosive fires that started at Lac-Mégantic in 2013. Nor is the DOT-117—J (new) or R (upgraded from the CPC 1232 standard)—the sort of solution that regulators have touted.

The expensive tank car replacement was a pointless distraction for U.S. and Canadian governments lacking sufficient political cojones to correct the real reason trains and people were being incinerated. Despite their convenient vilification, not even DOT-111 tank cars “explode” on their own, and recent incidents demonstrate beyond question that an extra one-sixteenth-inch of steel cannot contain the chain-reaction violence of a derailing oil train. To paraphrase James Carville, “It’s the contents, stupid.”

The root cause of bitumen train explosive fires is manifestly obvious: The intentional spiking of the barely flammable tar into a highly explosive concoction thin enough to transport. The bitumen is infused under pressure with naptha to make “dilbit”—a sludge just thin enough to flow into and out of tank cars. Once bitumen trains are under way, unavoidable jostling separates the naptha from the tar, creating a headspace of pure naptha gas. It is the naptha gas that ignites explosively upon exposure to sparking metal, even at 25 degrees below zero.

In Canada at least, public and regulator tolerance of crude-by-rail is at an end. Government slow orders and public outrage over oil train wrecks and infernos have cancelled any residual social or economic license to add yet more CBR to Canadian rails.

Should the next Alberta oil train crash and ignite a conflagration in the U.S., there should be zero surprise should American resisters blockade the few critical border crossings—now that they know how a hand-painted sheet can stop trains in their tracks.