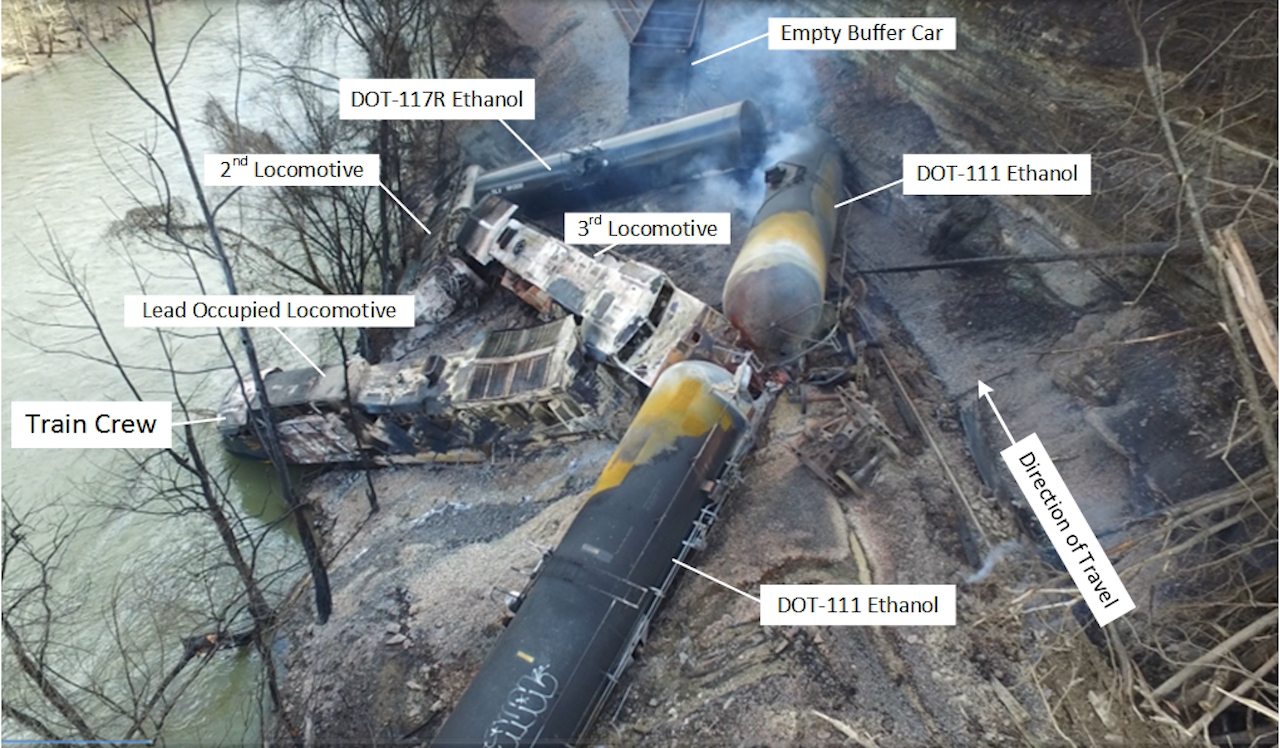 Aerial view of the derailment scene.​​ (Photograph courtesy of Pike County Office of Emergency Management with overlay annotations by NTSB.)

The National Transportation Safety Board (NTSB) recently determined that the probable cause of a February 13, 2020, derailment of CSX Transportation (CSX) train K42911 on a railroad track that runs between a hillside and the Russel Fork River in Draffin, Ky., was loose mud, vegetation, sand, soil and rock from a mudslide that obstructed the track following excessive rain accumulation over several weeks.

According to NTSB, the derailment occurred because the area near the derailment site received more than 300% of its normal amount of rainfall in the two weeks before the derailment, creating an environment favorable for mudslides to occur across the region. This excessive accumulation of precipitation, combined with a natural drainage environment and the slope of the hill, caused the mudslide, NTSB says.

Three leading locomotives, a buffer car, and four tank cars located at the front of the train derailed. Two of the derailed tank cars breached and released 38,400 gallons of denatured ethanol, which combined with diesel fuel from the locomotives and ignited. The locomotives were destroyed by the ensuing fire, and the train crew was able to evacuate through the river and sustained minor injuries.

Additionally, NTSB found that although the engineer initiated emergency braking at the first opportunity, there was not enough time to stop the train before it collided with the mudslide.

Contributing to the derailment, NTSB says, was CSX’s use of a weather alert system in which notifications were developed and implemented that “did not account for the impact of the unusual increases and accumulation of precipitation” over several weeks, and elevated temperatures in the month before the derailment.

The severity of the derailment, NTSB says, could have been reduced had the two breached U.S. Department of Transportation (USDOT)-111 tank cars been located further toward the rear of the train where they would have had a lower risk for derailment or damage. These issues were discussed in a 2020 Safety Recommendation Report, Placement of DOT-111 Tank Cars in High Hazard Flammable Trains and the Use of Buffer Cars for the Protection of Train Crews.

Also contributing to the severity of the derailment, NTSB says, was the failure of the Pipeline and Hazardous Materials Safety Administration (PHMSA) to “withdraw regulatory interpretation 06-0278 that pertains to Title 49 Code of Federal Regulations 174.85, which allowed the use of a single buffer railcar between the locomotives and the first tank car containing hazardous materials if no other nonhazardous materials cars are available in the consist.”

As a result of the investigation, NTSB recommended to Amtrak and the Class I railroads that they “revise the weather alert criteria for train operators to include recent and long-term historical weather data (dynamic weather conditions) to improve weather alerts.” NTSB also recommended that once the criteria are updated, “the railroads ensure their operational and engineering personnel are aware of any revisions and changes to their practices and protocols.”

NTSB also recommended to two railroad industry organizations that they notify their members on the circumstances of this derailment and that they request their members review and revise as necessary their weather alert criteria to include input from recent and long-term historical weather data.