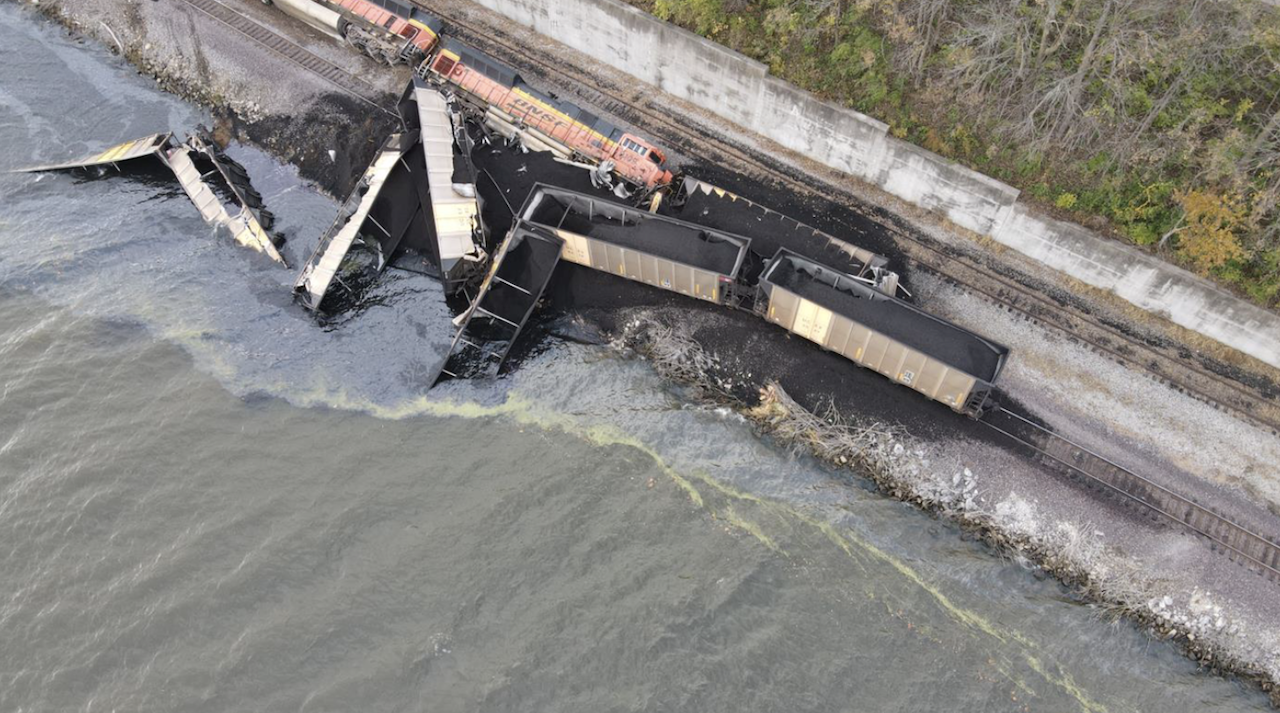 ​Aerial photo of the derailment of the two locomotives and eight hopper cars. Two additional hopper cars are submerged in the river. (Source: BNSF)​

The National Transportation Safety Board (NTSB) recently stated in a report that the probable cause of a November 2021 collision between towing vessel Baxter Southern and a BNSF coal train was the tow’s pilot and captain “incorrectly identifying” a caution area on the vessel’s electronic chart system (ECS) before pushing the tow up against a riverbank too close to a railroad track, leading to a train derailment near Galland, Iowa.

The Marine Investigation Report 22/22 (downloadable below), which was issued on Aug. 25, details the NTSB’s investigation into the Nov. 13, 2021, collision between the Mississippi River towing vessel and a BNSF coal train transiting the track along the shoreline of the Upper Mississippi River.

According to the report, the train struck a barge that was overhanging the railroad track leading to the derailment of two locomotives and 10 hopper cars loaded with coal. Six of the derailed hopper cars, according to the investigation, entered the river, and two train personnel sustained minor injuries. The collision, NTSB says, resulted in $1.9 million in damages to the locomotive and freight cars while the barge sustained minor scrapes.

According to the report, during a transit downriver, strong wind gusts made the situation unsafe for the Baxter Southern to continue the voyage as planned. Using the vessel’s ECS, the captain and pilot, NTSB says, “identified a location on the riverbank that they believed represented a fleeting area safe to push up against.” Neither the pilot nor the captain, NTSB adds, clicked an exclamation point symbol on the electric chart, which would have showed that the area presented a “Railroad Collision and Trackbed Erosion Risk.”

According to NTSB, the pilot pushed the tow onto the riverbank, and three crewmembers headed forward on the tow to verify the forward-most barge was clear of the track. While the barge did not cross over either rail, it extended about a foot over the railroad ties.

According to the report, when the Baxter Southern pilot saw the light of the approaching train, he attempted to move the tug and tow away from the riverbank. The BNSF train’s engineer activated the train’s emergency brake when the train was about 300 feet from the barge but with only seconds to respond, the activation of the train’s emergency brake and the attempt to move the tow occurred too late to avoid the collision.

“ECS provides a wealth of navigation information to mariners,” the report said. “Electronic charting display and information systems (ECDIS) enables users to obtain more information about a feature by querying through a cursor pick. There are many features—including warnings and other navigation information—that can be obtained through a cursor pick that are not specifically noted in the default chart display. Mariners should ensure they understand all symbols and applicable advisories identified in their ECS, and owners and operators should ensure that their crews are proficient in the use of ECS.”