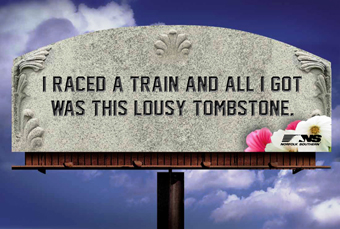 Norfolk Southern is bringing the campaign to East Tennessee—Knoxville, Chattanooga, and the Tri-Cities region—this year “to remind people to use their brains, and be smart and alert around trains.”

“Tennessee was selected because of its high number of train-vehicle crashes and trespassing incidents,” NS says. “In 2012, the state ranked ninth in the nation, with 66 highway-rail collisions resulting in four deaths and 18 injuries, while 10 people died and 10 were injured while trespassing on railroad tracks, equipment, and property.”

“The dramatic billboards grab your attention and make you think first before you cross the tracks,” says NS Director Grade Crossing Safety Bill Barringer. “When people realize that trains can take a mile or more to stop, and the impact of a train hitting an automobile is similar to the impact of an automobile flattening a soda can, that makes a memorable impression.” 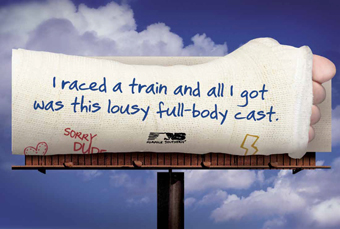 In addition to the billboards, the campaign’s mascot, “Brainy,” described as “a giant pink brain,” will share information about railroad safety by giving away notebooks, T-shirts, and sports rally towels at state fairs, festivals, and University of Tennessee at Knoxville and Chattanooga football and basketball games.

“To reach college-aged students, who statistically are more likely to disregard train horns and flashing lights to ‘beat the train’ across the tracks, talk on cell phones, listen to music, and drive aggressively, Train Your Brain messages also will appear in some unexpected places—gas pumps, movie theater screens, and even on frozen billboards (wraps on ice chests at convenience stores),” Barringer says. 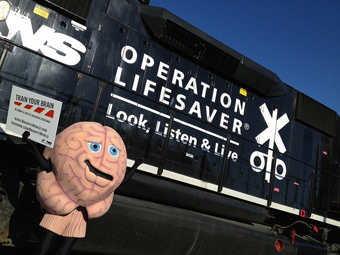 Norfolk Southern launched Train Your Brain in Memphis in 2007, with the Memphis-based marketing communications firm Archer Malmo providing creative support and coordination. Over the past six years, the campaign has run in North Carolina, Indiana, Ohio, and Alabama, reaching more than 800,000 people. For more information, go to the Brainy’s World website or Facebook page. Norfolk Southern also is a longtime supporter of Operation Lifesaver.