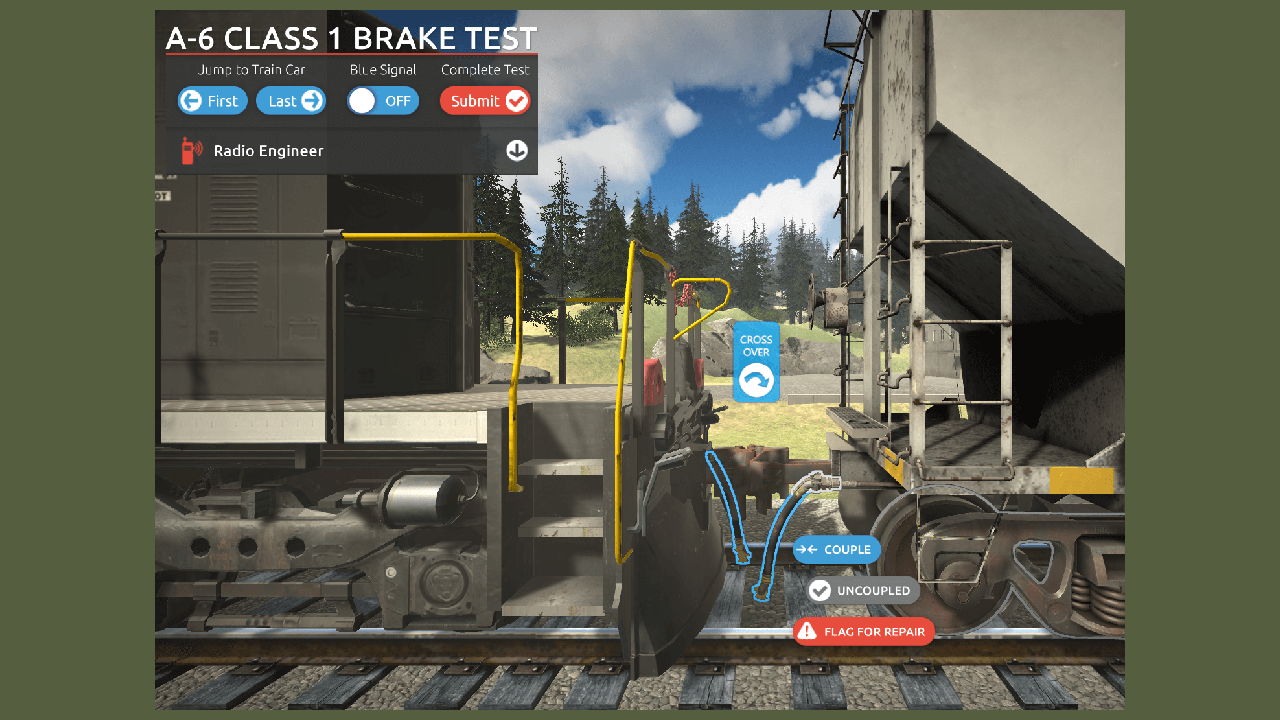 Norfolk Southern proposes to create a 3-D simulation, or training simulator, developed by Heartwood using web-based software to satisfy the hands-on portion of the training required by 49 CFR 232.203(e), in connection with periodic refresher training. Refresher training, required at intervals not to exceed three years, consists of classroom and hands-on training, as well as testing. NS seeks to modify current training requirements by changing Section Five: “Require all employees to individually demonstrate “hands-on” capability by successfully applying the skills and knowledge the employee will need to possess in order to perform the tasks required by this part that the employee will be responsible for performing to the satisfaction of the employee’s supervisor or designated instructor.”

“Inspecting and testing freight car air brakes, a common railroad task, is a fundamental part of a railroad’s initial training for conductors and freight car mechanics,” NS says. “This inspection and testing, known as CFR 232 Class I Brake Test – Initial Terminal Inspection (A-6), requires Norfolk Southern (and most railways) to have multiple freight cars on-site and allocate a significant amount of training time for demonstration, practices, and evaluation.”

NS says its simulation training is designed to “alleviate the physical space and time constraints [associated with the] inspection process. The simulation allows a student to visually inspect a variety of randomized freight cars, as part of a train, while manipulating brake components as necessary to properly configure the brake system. The student determines correct brake pressure and inspects for brake application & release via an exam practice mode. This gives the student additional practice at their pace, from any device, with a record of their performance given at the end. The benefits are improved knowledge of air brake components and functions; increased efficiency when performing the A-6 Brake Test; increased proficiency when determining the condition of air brake equipment; and a standardized training resource available to all. The 3D sim is also a formalized tool for refresher training for a given individual and part of a wider initiative for meeting FRA Part 243 training requirements. Students loved it, they can do the task whenever they have time, as opposed to scheduled. An instructor observed conductors training with the 3-D sim before class even started and asked to take it back with them.”

NS adds that it expects to train 50-100 freight car repair personnel and 1,800 conductors using the simulation, “with the possibility of even broader use soon, for 15,000 personnel,” and “is identifying other key training areas to deploy a suite of 3-D training simulations and partnering with Heartwood to make this technology available to other interested railroads.”

The Brotherhood Railway Carmen (BRC) and the Transport Workers Union of America, AFL-CIO (TWU) have filed comments in the Federal Register disputing Norfolk Southern’s petition. BRC (a division of the Transport Communications Union, or TCU) and TWU say the requested relief “will not ensure the same level of safety as provided by the current Federal regulations. Among other things, simulated testing should be used only as a supplement to, and not a replacement for, the hands-on training currently required by 49 CFR 232.203(e). This has also been the position of FRA as well.”

“The NS petition for waiver should be denied because the carrier has failed to show that the requested relief will afford the same level of safety to both railroad workers and the general public that 49 CFR 232.203(e) currently provides. NS claims its proposal will simulate a Class I Brake Test and places the user in a virtual 3-D scenario that requires them to respond to preprogrammed defects on various types of freight cars and brake systems while performing the brake test. To successfully complete the scenario, the user must identify key components and identify and correct all defects, such as closed cut-out cocks, uncoupled air hoses, closed angle cocks, wrongly positioned retainer valves, and fouled brake rigging. NS seeks to apply this waiver system-wide to all NS craft personnel responsible for performing freight air brakes tests. This would include supervisors, freight car repair personnel, and conductors.

“It is the position of BRC that simulated testing should be used only as a supplement to, and not a replacement for the “hands on” training currently required by 49 CFR 232.203(e). This has also been the position of FRA as well. While a 3-D simulation described by NS is beneficial, it cannot replace the ‘hands on’ training that railroad employees currently receive in the field. For instance, training in the field provides [various] challenges such as weather or incidents where an inspector’s olfactory senses are useful in conducting inspections. These are factors that a computer cannot simulate.

“Moreover, should the relief be granted, NS’s proposal will have far-reaching implications not only to its own operations but to possibly all rail carriers operating in the U.S.as well. First, NS will be implementing the computer simulations system-wide to all NS craft personnel responsible for performing freight air brake tests, including supervisors, freight car repair personnel, and conductors. This means that a significant amount of NS personnel will be using 3-D simulations for refresher training at a time when we know little about the technology’s efficacy. In addition, other carriers could also request the same or similar relief, creating more of the same safety issues. Changing the training requirements currently provided for in 49 CFR 232.203(e) is a serious endeavor, and the upmost precautions and transparency should be taken when evaluating such a request for relief.

“Finally, BRC would also like to comment on the carrier’s choice to supply only a redacted copy of its petition for waiver to the public docket. This factor makes it truly impossible for interested parties to comment on positions that may or may not be relevant to them. In fact, BRC believes that FRA should only consider the information offered in the redacted version and the information provided by interested parties regarding the redacted version in making its decision on this waiver request. Accordingly, based on the information provided above, BRC requests FRA deny the NS petition for waiver.

“In our view, there should never be a replacement for the hands-on requirement of 49 CFR §232.203. What is concerning to this organization is the statement on page 2 of the redacted copy: ‘The Class 1 Brake Test Simulator will also be utilized to enhance training of other crafts and supervisors including Freight Car repair and Conductors.’ It is the opinion of this organization that [NS] is using [its] request for this waiver as a way to circumvent Regulation 49 CFR §232.205. Norfolk Southern is well aware that the Carmen Craft provides the Class I Brake Test on all equipment yet, wants to use this Class I Brake Test simulator to train other Crafts.

“49 CFR §232.205 Class 1 Brake Test reads, in part, ‘Where a railroad’s collective bargaining agreement provides that a carman (emphasis added) is to perform the inspections and tests required by this section, a carman alone (emphasis added) will be considered a qualified person. In these circumstances, the railroads hall ensure that the carman is properly trained and designated as a qualified person or qualified mechanical inspector, pursuant to the requirements of this part.’

“For whatever reason, Norfolk Southern has only supplied a ‘REDACTED’ copy to be viewed by the interested parties, making it impossible to comment on positions that may or may not be relevant. The FRA should only consider the redacted submitted version and what the interested parties are able to comment on in making their decision on this waiver request. The organization requests that the petition for waiver from 49 CFR §232.203 should be denied and that and in accordance with 49 CFR §232.205, no craft other than Carman’s Craft should be trained on a Class I brake test.”