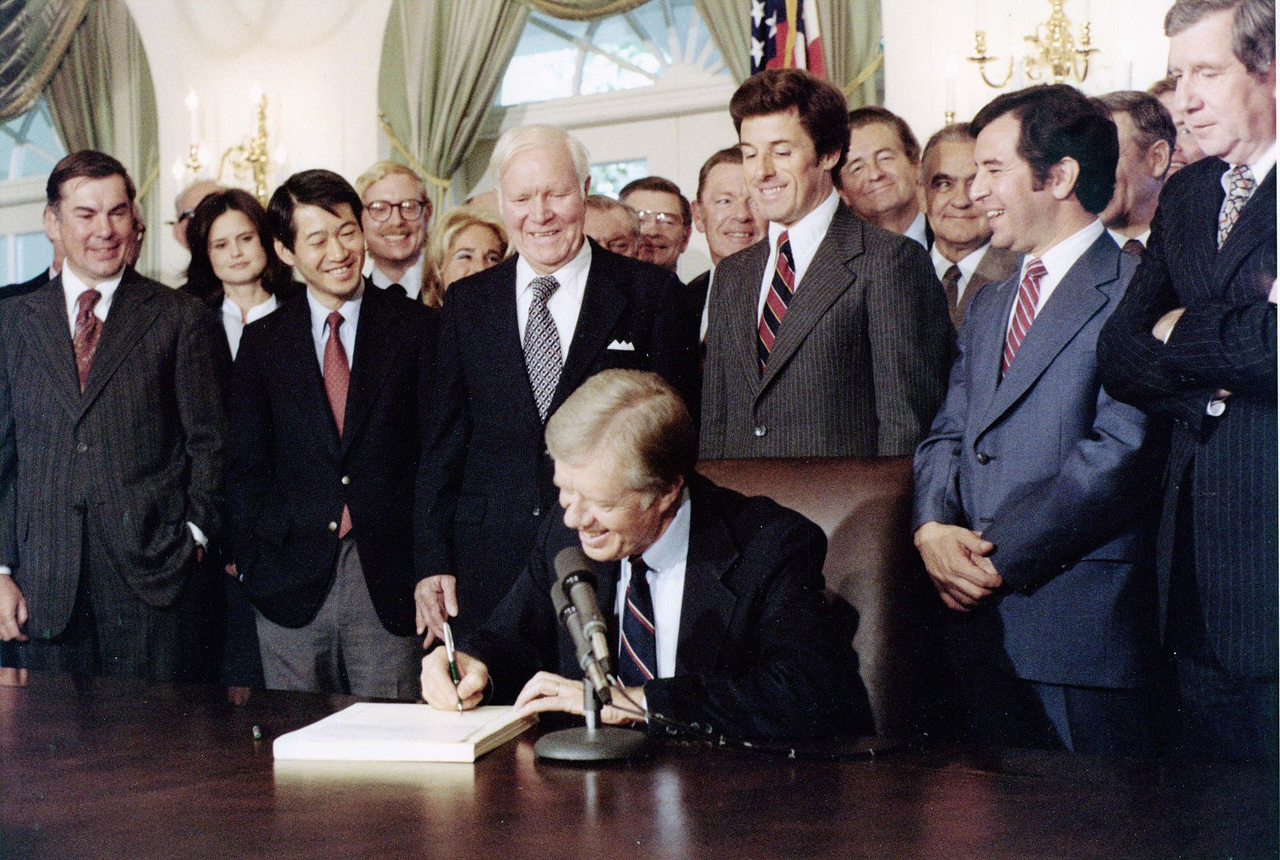 Pictured: President Carter signing the Staggers Rail Act into law on Oct. 14, 1980. Representative Harley O. Staggers (D-W.Va.), sponsor of the bill, stands to the President’s right. Staggers (1907-1991) was chair of the House Interstate and Foreign Commerce Committee. But directly behind Carter is the person most responsible for crafting the actual legislation, Rep. James J. Florio (D-N.J.) chair of the House Transportation Subcommittee.

Surely you remember the Ash-Pan Act, named after Sen. Ash and Rep. Pan. In fact, it was a 1908 railroad safety law—its name identifying a steam locomotive appliance.

And how about the Heinz-Pickle Act named after Sen. John Heinz (R-Pa.) and Rep. Jake Pickle (D-Tex.)? Such named legislation is a humorous thought, but they never so conspired while in office.

And were you to suggest consulting the 1926 Parker-Watson Act—named for Rep. James Parker (R-N.Y.) and Sen. James Watson (R-Ind.)—to understand a railroad labor controversy, you will encounter blank stares until adding the better recognized popularly named, Railway Labor Act.

So—to borrow a phrase from Shakespeare (Merry Wives of Windsor)—what the dickens are railroaders intending by speaking repeatedly of the increasingly unfamiliar and four-decades-old Staggers Act? They mean, of course, the 1980 Harley O. Staggers RAIL Act, the official name that, if used, at least provides modern-day opinion leaders and decision-makers not steeped in railroad history an inkling that the law has to do with railroads—specifically, providing railroads with partial economic deregulation.

Pointedly, railroaders are wedged in a 41-year-old linguistic rut. The time is nigh to cease citing the Staggers Act—or even the Staggers Rail Act—in celebrating and defending partial economic deregulation of railroads.

Good grief, the law not only is named after a long-deceased and now hazily, if at all, remembered West Virginia Democratic lawmaker—Harley O. Staggers—but Staggers didn’t even write the bill that carries his name, nor did he manage its successful passage.

Much of the bill writing, as well as its majority-vote getting, was accomplished by Rep. James J. Florio (D-N.J.). In a last-ditch effort to inch over the finish line what was then the Rail Act of 1980—it in danger of being relegated to the dust bin of history—Florio, in a flash of political savvy, renamed it to honor Staggers, about to retire and still an immensely popular chairman of the House Interstate and Foreign Commerce Committee (now Transportation and Infrastructure Committee). The name-change to the Harley O. Staggers Rail Act similarly earned for the bill bipartisan support in the Senate.

But that was 41 years ago, and Staggers died 30 years ago. Of the 535 members of Congress who, in 1980, had opportunity to vote on the Harley O. Staggers Rail Act, only five remain in Congress, and two of them didn’t even cast a vote on the bill.

Few, if any, congressional staff remain from 1980, and among current rail regulators, one wasn’t even then born, two were then frolicking on grammar school playgrounds, one was in high school, and another was then a young attorney focused on non-transportation issues.

A recent random polling of some dozen House and Senate staffers (none working for relevant railroad oversight committees) revealed not a single one immediately recognizing the name, “Staggers Act,” or “Staggers Rail Act.” Each, however, understood the term, “partial economic deregulation”—but absent the inclusion of “economic,” several wondered if it encompassed safety regulation.

There is a failure to communicate effectively with a diverse audience when the message is muddled by an unrecognizable name or term. The easiest thing for a reader to do is to stop reading—or for a listener to tune out the intended message.

One who understood message muddling was former rail regulator (1989-1992) Edward M. Emmett of Surface Transportation Board (STB) predecessor Interstate Commerce Commission (ICC). Spotting in a draft decision the legal term, “nunc pro tunc” (Latin for “now for then,” meaning allowing something now to be done that should have been done earlier), Emmett, after enquiring were it the name of a Vietnamese general, admonished staff to write decisions “for the public that pays for them and wants to understand them.”

The late Abner Mikva—congressman, federal judge, law professor, White House legal counsel and Chicago pol to the core—spoke of the peril of merely waving to friends in the audience. Translation: If one wishes to capture the attention and support of a diverse group of opinion leaders and decision-makers, communicate in easily understood terminology, such as, “a 1980 law partially loosening railroad economic regulation.”

For those wondering the identity of the five members of Congress remaining since 1980, they are: