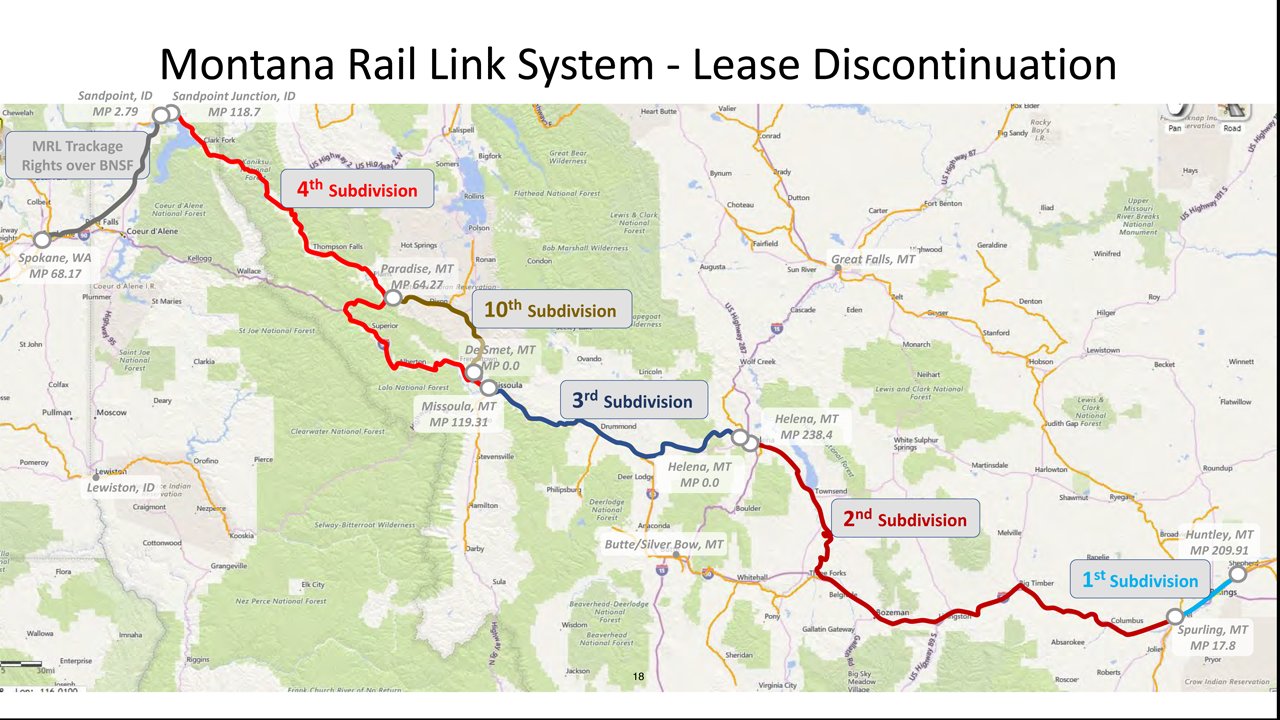 Montana Rail Link (MRL) in January announced it would cease its long-term lease with BNSF to operate over main line between Huntley, Mont., and Sandpoint, Idaho. Now, it is asking for Surface Transportation Board (STB) authorization.

As the freight market has evolved, more than 90% of freight volume moving on MRL is on BNSF trains, MRL explained earlier this year. The lines, which it has operated for more than 35 years, have become a “critical link in BNSF’s northern transcontinental network, delivering grain, consumer and industrial products to the West Coast,” reported the railroad, Railway Age’s 2013 Regional of the Year. By MRL ending its lease and BNSF resuming operation, “BNSF will eliminate the need to interchange freight between the two railroads, strengthening the resiliency of the supply chain and enhancing rail capacity in the Pacific Northwest.”

In MRL’s Nov. 18 petition for exemption filing with the STB (scroll down to download), it seeks to terminate the lease over approximately 656.47 miles of non-contiguous main rail line owned by BNSF (see map above). This includes:

Additionally, MRL seeks to discontinue its bridge-only trackage rights over approximately 96.04 miles of rail line owned by BNSF in Montana, Idaho and Washington, which include the following segments (collectively called Trackage Rights Lines):

MRL wrote in the filing that it “obtained leasehold rights and trackage rights over the lines owned by BNSF through a series of transactions previously exempted by the Board and its predecessor the ICC [Interstate Commerce Commission]. MRL and BNSF have mutually agreed to terminate certain lease and trackage rights agreements that govern these MRL operations. Upon termination of the MRL lease and discontinuance of MRL service over the leased premises, BNSF will resume common carrier operations on the leased premises. BNSF currently operates common carrier service over the Trackage Rights Lines and will continue to do so following the termination and discontinuance of MRL’s trackage rights.”

According to MRL, the lines currently serve about 125 active shippers, “none of which will be adversely impacted by BNSF resuming operations.” MRL and BNSF “are cooperating fully to ensure an orderly transition of service so that there will be no interruption in rail service or adverse impacts on shippers,” the regional explained in the filing.

MRL has approximately 1,100 employees. Of those, 962 are unionized and represented by nine labor organizations: Brotherhood of Locomotive Engineers and Trainmen (BLET); American Train Dispatchers Association; Brotherhood of Maintenance of Way Employes; International Association of Machinists; Brotherhood of Railway Carmen; National Conference of Firemen & Oilers; International Brotherhood of Electrical Workers; Brotherhood of Railway Signalmen; and Transportation Communications Union. MRL reported in the filing that it “has reached voluntary implementing agreements with each of its unions, which the parties agree satisfy the requirements of Article I, Section 4 of the Oregon Short Line [employee protective] conditions.”

MRL has proposed “to consummate the discontinuance on or after the effective date of any Board decision granting this petition, subject to coordination with BNSF to ensure a smooth transition of service,” it told the STB. “MRL is unaware of any public interest factors that would militate against the Board granting the subject petition.”