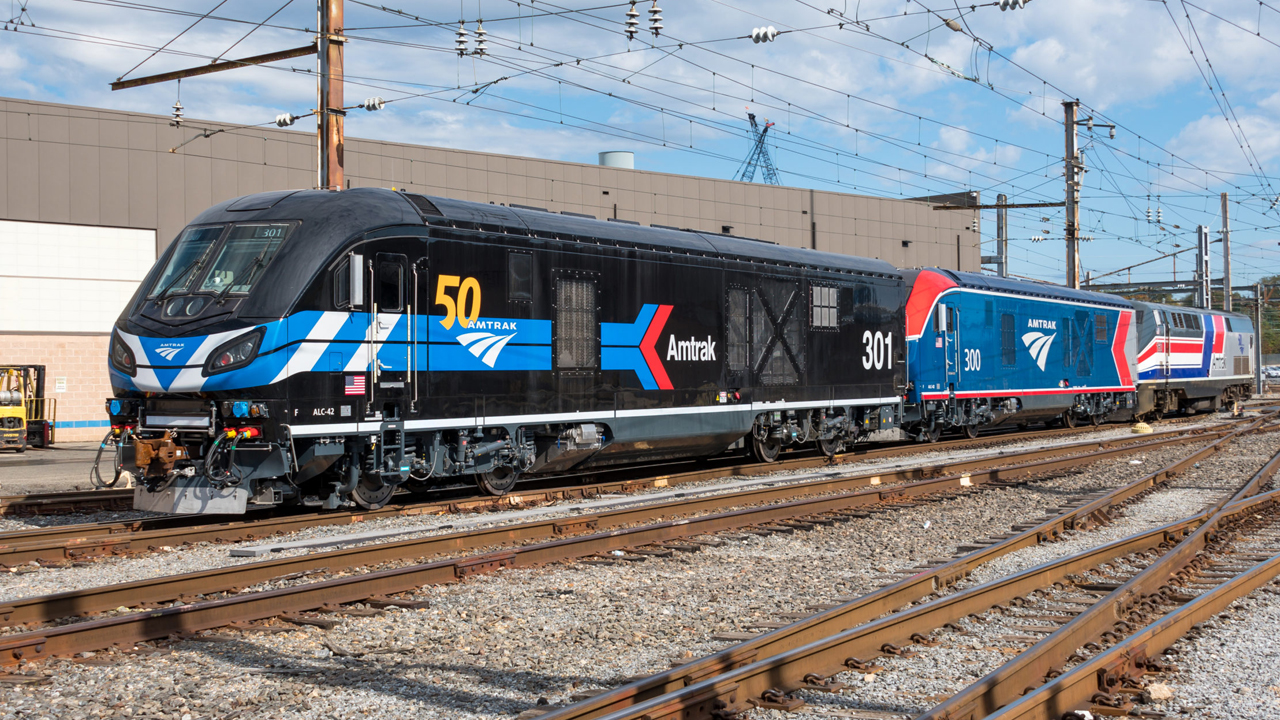 The Infrastructure Investment and Jobs Act—signed into law on Nov. 15, 2021—provides $102.1 billion for passenger and freight rail. This includes $66 billion of advance appropriations for FY 2022-26, of which Amtrak will receive $22 billion ($6 billion for Northeast Corridor and $16 billion for National Network grants).

The advance appropriations also include $36 billion for an updated version of the Federal Railroad Administration’s Federal-State Partnership grants program (with a set-aside of not more than $24 billion for NEC projects); $5 billion for FRA’s CRISI program; and $3 billion for a new Railroad Crossing Elimination competitive grants program.

“This is truly a once in a generation investment that will change the course of intercity rail transportation in America,” said Rep. Donald M. Payne, Jr. (D-N.J.) during a hearing he chaired last month for the House Committee on Transportation and Infrastructure’s Subcommittee on Railroads, Pipelines, and Hazardous Materials.

The $58 billion designated for intercity passenger rail is roughly equivalent to the total federal funding Amtrak has received since its founding 50 years ago, President Stephen Gardner testified at the hearing. (He takes on the additional role of CEO on Jan. 17) “It fulfills at last the long-held dream of adequate, multi-year federal funding to begin the modernization of Amtrak’s assets and … significant expansion of our route network,” Gardner said.

IIJA also provides $36.1 billion of additional General Fund authorizations, which include $19.2 billion for Amtrak investment ($6.57 billion for NEC and $12.65 billion for National Network grants) and $13 billion for competitive rail grants ($5 billion for CRISI, $7.5 billion for the Federal-State Partnership for Intercity Passenger Rail, $2.5 billion for Railroad Crossing Elimination, and $250 million for Restoration and Enhancement [R&E]).

Additionally, IIJA includes key policy provisions focused on intercity passenger rail, such as the establishment of a new competitive grant program for implementing interstate rail compacts; broadening the Federal-State Partnership grants program to help improve performance of or establish new service, and to cover projects that replace, rehabilitate or repair infrastructure, equipment or facilities to a state of good repair (SOGR); and the creation of a Corridor Identification and Development Program.

Following are highlights of how Amtrak could leverage the funding, which Gardner provided during the Subcommittee hearing.

“On the NEC main line from Boston to Washington, the IIJA funding appropriated directly to Amtrak will enable advancement and acceleration of both the sole-benefit critical infrastructure projects and SOGR work that are urgently needed after decades of underinvestment despite growing use,” Gardner said. “These appropriations will also advance SOGR projects on the Amtrak-owned Keystone Corridor and Springfield Line, Amtrak-owned trackage in Chicago and on the Michigan Line, and the portions of the Albany Line of the Empire Corridor that are owned or leased by Amtrak.

“The primary source of funding for the large-scale NEC infrastructure investments will be the FRA’s Federal-State Partnership grants, which will provide Amtrak and its state partners with a reliable, programmatic source of 80% federal funding for these critical, once-in-a-century projects, and the additional federal transit funding the IIJA provides to our commuter partners. These projects include the construction of the long-sought Hudson Tunnel Project between New York City and New Jersey, which has just received from the Army Corps of Engineers the final federal regulatory approval required for construction; the replacement of the 148-year-old Baltimore and Potomac Tunnel in Baltimore by the new Frederick Douglass Tunnel; and the replacement of major bridges like the Connecticut River and Susquehanna River bridges that have exceeded their useful lives.”

The IIJA directs FRA to create a “Project Pipeline,” or prioritized list of NEC capital projects that includes their proposed federal funding levels and cost allocation among project sponsors, by November 2022, Gardner said. The NEC Commission, comprising representatives from Amtrak, NEC states, USDOT and FRA, completed in July 2021 CONNECT NEC 35 (C35), a 15-year NEC reinvestment implementation plan. The Commission is now working to include additional project details and assessments of project readiness; to address service impacts during implementation; and to take into account the availability of funding, equipment and workforce.

“When fully funded and completed over the next 15 years, the infrastructure investments included in the C35 plan will cut down travel time by up to 30 minutes for passengers traveling between New York City and Washington or Boston,” Gardner said. “Maintaining the reliability and service frequency of Amtrak and commuter rail services along the NEC in the midst of all the work required to construct these investments will be a major challenge requiring close coordination with our commuter rail partners. While some disruption of and adjustments in services will be necessary while work is under way, passengers will see incremental improvements in trip times and reliability as projects are completed.”

The IIJA’s advance appropriations to Amtrak, Federal-State Partnership grants that Amtrak will seek, and IIJA transit funding provided to commuter railroads will allow advancement of the Major Station Amtrak Development Programs in New York City; Washington, D.C.; Philadelphia; Baltimore; and Chicago. IIJA funding will also help Amtrak move forward SOGR and improvement projects at more than 500 other stations nationwide in collaboration with state partners, communities and private entities. “In particular, it will enable us to accelerate work to bring all of our stations throughout the country into full compliance with the Americans with Disabilities Act,” Gardner testified.

Replacing obsolete equipment used on Amtrak’s state-supported and long-distance routes is one of the primary purposes of the $16 billion in additional National Network funding the IIJA provides to Amtrak, according to Gardner. “By 2031, we expect to have replaced nearly 40% of the passenger railcars we are currently operating across the entire network, and all the Amtrak-owned diesel locomotives used on our state-supported and long-distance services,” he pointed out.

“The IIJA specifies that the National Network and NEC advance appropriations shall be used to fully fund Amtrak’s replacement program for the single-level equipment Amtrak operates on the NEC in Northeast Regional service and on state-supported routes, providing the resources to cover both the Amtrak share and the state share that would otherwise be required under the Section 209 cost allocation methodology,” Gardner said, noting that the roughly $5.5 billion program covers 83 trainsets and related maintenance facility investments to replace the 45-year-old Amfleet I cars.

“The National Network funding will also allow Amtrak to initiate a procurement process to replace long-distance passenger cars that have reached the end of their useful lives, and exercise options to acquire additional ALC-42 locomotives, on top of the 75 we have already ordered, to replace the 20- to 30-year old Genesis diesel locomotives that power our long-distance trains,” Gardner said.

“The Corridor Identification and Development Program is perhaps the most important component of the IIJA because it will set the priorities and schedule for billions in future investments,” said Gardner, who noted that the current Amtrak route network is about the same size, and serves most of the same routes and places, as Amtrak’s route network 50 years ago. “It does not reflect the roughly 120 million increase in the U.S. population since then, much of which has occurred in now large, fast-growing states with diverse populations, such as Florida, Texas and Georgia, that Amtrak barely serves,” he emphasized.

IIJA directs FRA to establish the program, and to solicit proposals from Amtrak, states and other public entities. FRA is to submit to Congress by May 2023 a prioritized list of selected corridors and details on their funding needs, to be updated annually. FRA, in partnership with public entities, is also tasked with developing Service Development Plans for each selected corridor. Projects included in the Project Pipeline, along with other National Network capital investments, will be eligible for the portion (at least $12 billion) of the Federal-State Partnership for Intercity Passenger Rail funding that FRA awards to National Network projects, Gardner said.

Informing this new program will be Amtrak’s 15-year “Connects US” plan, which has identified some 30 new corridors “with high demand and potential for intercity passenger rail service, and an additional 20 existing corridors that were prime candidates for service expansion”; FRA’s recently completed Midwest Regional Rail Planning Study; and state-rail and corridor-specific plans for intercity passenger rail expansion from the states of California and North Carolina and the Southern Rail Commission, for example, Gardner testified.

“To encourage states to initiate new or expanded Amtrak service, the IIJA authorizes $250 million for competitive grants under the existing R&E Program, which provides operating funding support during the initial years,” Gardner said. “It increases the percentage of operating losses these grants can cover to a maximum of 90% in the first year of operation and extends the period during which R&E grants can be used to cover a diminishing share of operating losses from three to six years. The IIJA also authorizes Amtrak to use up to 10% of its National Network grants—up to $1.26 billion if Congress fully funds authorized appropriations—for capital needs and initial operating assistance on routes selected for the Corridor Development Program.”

IIJA also requires that the State-Amtrak Intercity Passenger Rail Committee revise the Section 209 Cost Methodology Policy that governs the allocation of costs of state-supported routes between Amtrak and states, Gardner said. “We know some states have concerns about the appropriateness, accuracy and transparency of some of the cost allocations under the current 209 Policy,” he testified. “Now is the time to update and improve the policy to support service growth and create higher degrees of predictability and control for both our state partners and Amtrak.”

As well, IIJA repeals a longstanding prohibition of any food or beverage service on Amtrak trains unless revenues covered all costs, and establishes a task force to improve its financial performance as well as quality.

“The comprehensive, prioritized processes the IIJA establishes for funding and implementation of both NEC capital investments and expansion of corridor services are a welcome development, particularly since they are accompanied by funding that will make the lists of prioritized projects more than a wish list,” Gardner summed up. “However, despite the aggressive timelines the IIJA sets for implementation of these processes, it could be a year and a half before that occurs.

“Needless to say, we hope we can avoid hitting the pause button for 18 months on implementation of already planned NEC capital projects, or on advancement of additional state-supported services on which work to add new trains and routes, in collaboration with our state partners, is already under way. Within the next 18 months, Amtrak and its state partners plan to add service to Roanoke and Norfolk, Va.; to Burlington, Vt.; and between New Orleans and Mobile, Ala. We also hope to finalize agreements and initiate construction of capital investments for new corridor service between Chicago and St. Paul, Minn. We also plan to continue our work with state partners on other service expansions, such as the development of the portion of the Southeast High Speed Rail Corridor between Petersburg, Va., and Raleigh, N.C. …

“It is essential that FRA, Amtrak and the NEC Commission work together to ensure that the FY 2022 and 2023 funding the IIJA appropriates for infrastructure investments and corridor development is made available for that purpose as quickly as possible.” 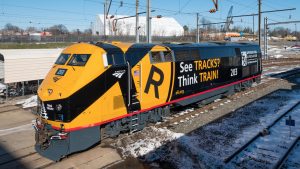 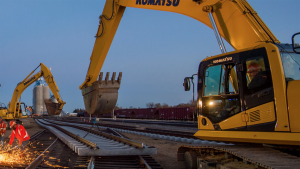 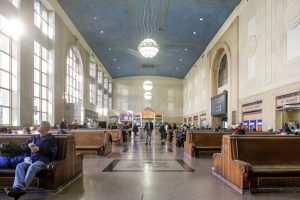