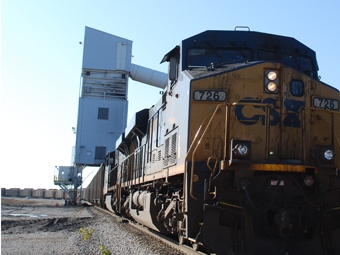 The regulation, according to a report in The New York Times, “takes aim at the largest source of carbon pollution in the U.S., the nation’s more than 600 coal-fired power plants. If it withstands an expected onslaught of legal and legislative attacks, experts say that it could close hundreds of the plants and also lead, over the course of decades, to systemic changes in the American electricity industry, including transformations in how power is generated and used.” It is “one of the strongest actions ever taken by the U.S. government to fight climate change. . . . It is also likely to stand as President Obama’s last chance to substantially shape domestic policy and as a defining element of his legacy. The President, who failed to push a sweeping climate change bill through Congress in his first term, is now acting on his own by using his executive authority under the 1970 Clean Air Act to issue the regulation.”

How the regulations, if implemented, will affect the U.S. railroad industry is unclear at this point. U.S. Class I coal loadings and revenues have declined in the past few years, largely due to low natural gas prices. In 2012, the railroads originated about 800 million tons of coal—about 7 million carloads (second to intermodal), 41% of all tons, and 21.6% of gross revenues.

The AAR issued a statement from President and CEO Edward R. Hamberger in response to the EPA’s Clean Power Plan proposal: “While AAR is still reviewing the proposal, freight railroads are concerned about the economic consequences the rule could have for both the coal industry and the larger American economy. We must not lose sight of the energy needs required to maintain our nation’s well-being and economic competitiveness in the years ahead. EPA needs to strike the right balance between environmental goals and technological and economic feasibility, and avoid actions that undermine job growth or place American manufacturers at a competitive disadvantage in world markets.”

“While RSI and its member companies are still reviewing the proposal, we are concerned that the EPA’s proposed carbon emissions regulations will burden consumers and cause disproportionate harm to the U.S. rail industry and its supply companies, which manufacture goods for and provide services to our nation’s freight railroads,” said Railway Supply Institute Vice President of Government Affairs Nicole Brewin. “Not only is EPA’s proposal unprecedented in its reach, cost, and complexity; the proposed carbon regulations could strike a major blow to our nation’s economy, raising energy prices and costing jobs.

“Recent analyses of potential carbon regulations show the impacts could include as many as 178,000 jobs lost per year; Double-digit electricity price increases in many states; and forced shutdown of more than half of all U.S. coal-fired power plants.

“The proposed regulations are of great concern to RSI because most coal in the U.S. is consumed at coal-fueled power plants. Historically, coal has dominated U.S. electricity generation because it is such a cost-effective fuel choice, and freight rail is a big reason for that. According to the Association of American Railroads, more than 70% of the coal delivered to coal-fueled power plants is delivered by rail. In 2012, coal accounted for 41% of rail tonnage and 21.6% of rail gross revenue.

“RSI’s member companies represent a $23 billion-a-year industry supporting 90,000 American workers. We are very concerned about the consequences this proposal will have on American companies.”

Under EPA’s proposed rule, which the President has directed to be completed in June 2015, states will be given a variety of policy options to achieve the emissions cuts. Rather than immediately shutting down coal plants, states would be allowed to reduce emissions by making changes to their electricity distribution systems (for example, installing wind and solar generation technology, or starting or joining state and regional “cap and trade” programs, in which states agree to cap carbon pollution and buy and sell permits to pollute). States will be required to implement emissions reduction measures and submit compliance plans to the EPA by June 2016.

Though states will have their own reduction standards, the national average is expected to be 25% by 2020 and 30% by 2030. The rule gives states and companies as many as 15 years to comply, more time than some environmental groups had wanted, and a base year favored by utility companies.

EPA says its flexible approach should allow states to comply with the regulation more easily and cost-effectively, by adopting policies best tailored to regional economies and energy mixes. Coal industry groups, particularly those in energy-producing states, are planning to sue to block or delay the rule, and say EPA’s flexible approach makes the rule more open to legal challenges.

EPA’s proposal, according to The Wall Street Journal, “is already an explosive point of debate in some Senate and House midterm races, particularly in some energy-producing states where Democrats are vulnerable. . . . Republicans are using the proposed rule to assert that Democrats will raise energy costs and kill jobs, and that carbon restrictions are futile in the absence of similar action by China and other large polluting nations. Many Republicans are linking the rule to other Obama Administration actions that they view as overly intrusive in the economy.”