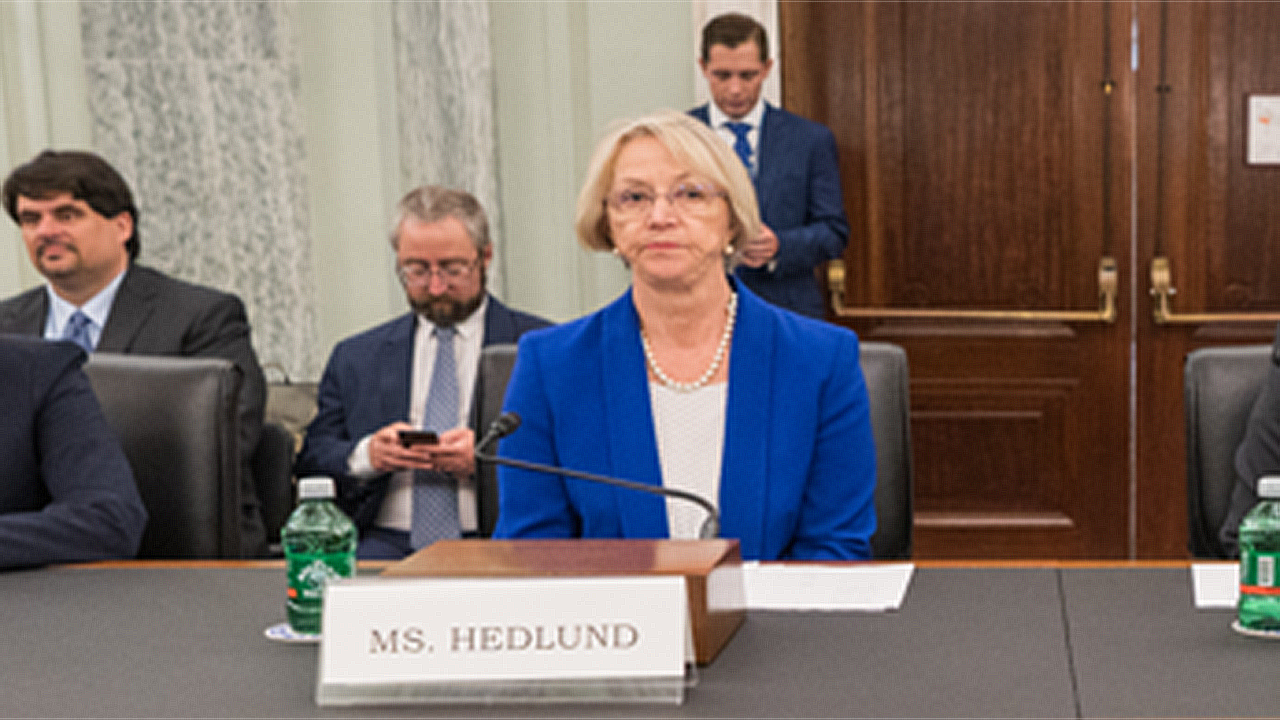 Karen Hedlund at a June 24 preliminary Senate Committee on Commerce, Science, and Transportation hearing on her nomination to the STB, along with three other Biden nominees to other government posts.

By unanimous consent, Democrat Karen J. Hedlund was confirmed by the Senate late Dec. 16 to the five-member Surface Transportation Board (STB). She succeeds Republican Ann D. Begeman, whose second term had expired in 2020 and who has been serving out a statutory maximum one-year holdover period. STB members are limited to two five-year maximum terms, with a one-year holdover if a successor has not been Senate-confirmed.

Separately, the nomination of Democrat Amitabha Bose to be Federal Railroad Administrator failed when Sen. Rick Scott (R-Fla.) objected. Bose, however, has been serving as Deputy Administrator and will continue in that role indefinitely, making academic the “hold” placed by Sen. Scott.

Also awaiting Senate confirmation are Democrat Linda Puchala and Republican Gerald W. (Trey) Fauth III to new terms on the independent (from Executive Branch) National Mediation Board (NMB). As the NMB statute permits members to remain indefinitely pending Senate confirmation of a successor—there being no term limits—Puchala and Fauth also will remain in office. Earlier this month, Democrat Deirdre Hamilton was Senate-confirmed to succeed Republican Kyle Fortson on the NMB.

Hedlund was nominated to the STB by President Biden in April 2021. In August, following a hearing into her qualifications, the Senate Commerce Committee recommended Senate floor confirmation. A lone committee dissent was by Sen. Mike Lee (R-Utah).

Hedlund remained in limbo for almost four months, however, as attempts at a confirmation vote were blocked by the still-opposed Sen. Lee, speculation being he didn’t want Hedlund as an STB member during the pendency of an STB decision on a new 85-mile intrastate railroad in Utah.

The Uinta Basin Railway, a P3 of seven Utah counties, is intended to haul primarily crude oil extracted via fracking from the Uinta Basin to a Union Pacific Railroad connection. Because the new railroad will connect with the national rail network, it required a certificate of public convenience and necessity issued by the STB. As STB Chairperson Martin J. Oberman, a Democrat as is Hedlund, expressed early concerns with the project, the speculation was that Lee harbored unease that Hedlund might adopt similar views as Oberman.

The Uinta Basin Railway project was approved by the STB Dec. 15—subject to final environmental mitigation measures—with Lee almost immediately withdrawing his hold on the Hedlund nomination. Oberman was the lone “no” vote on the project.

Most recently, Hedlund has been Vice President and National Strategy Adviser at the consultancy WSP USA (previously Parsons Brinckerhoff). She has worked with federal, state and local transportation agencies as well as private companies to facilitate financing and development of transportation projects through P3s. She served as strategic advisor on a number of WSP rail projects, including Amtrak’s Gateway Program, O’Hare Express Rail and the California High-Speed Rail Program, and is a leader of peer-to-peer exchanges with state and local municipal officials through the Build America Transportation Investment Center Institute.

Earlier in her career, Hedlund was the Federal Railroad Administration’s Chief Counsel (2010) and then Deputy Administrator (2011-2016), leading the agency’s $12 billion high-speed rail grant program. She also participated in FRA-funded multi-state locomotive and passenger equipment purchases, and on California High-Speed Rail and Amtrak next-generation trainset procurements. Additionally, Hedlund oversaw the FRA’s Railroad Rehabilitation and Infrastructure Finance (RRIF) program. She served as Chief Counsel (2009-2010) at the Federal Highway Administration and had been a partner at law firms Nossaman LLP, Skadden Arps and Mayer Brown, focusing on transportation issues. She earned a law degree from Georgetown University and an undergraduate degree from Harvard.

Given her private sector and FRA background, Hedlund may possess the most practical transportation experience on the current Board, with Fuchs possessing perhaps the most public-policy-oriented experience. He previously was a senior legislative aide to Senate Commerce Committee Republicans, where he helped draft rail-related legislation affecting freight and passenger railroads, including the 2015 Surface Transportation Board Reauthorization Act that was the first reauthorization of the agency since its creation in 1995. Fuchs also worked on railroad legislative and policy issues in a prior post at the Office of Management and Budget.

At age 73, Hedlund joins Oberman as the two oldest to take ICC/STB office—Oberman also 73 when taking office in 2019. Until 1978 and passage of the Age Discrimination in Employment Act, federal government employees were required to retire at age 70. Only through Executive Orders of the President of the United States were eight ICC members, prior to 1978, allowed to continue working past age 70.

Railway Age Capitol Hill Contributing Editor Frank N. Wilner, a former STB chief of staff, a past president of the STB bar association and a former assistant vice president for policy at the Association of American Railroads, is author of seven books, including Railroads & Economic Regulation, whose publication by Simmons-Boardman Books is pending.