The Greenbrier Companies announced on Feb. 5, 2014 that it will design a new-generation tank car for rail transport of hazardous freight, including flammable crude oil and ethanol, “that can better withstand the additional demands associated with operating unit trains” and “respond to safety criticisms of the existing legacy fleet of older DOT-111 tank cars.” Greenbrier is also introducing retrofits for tank cars already in service or now being produced, “significantly enhancing the safety of existing cars.”

Greenbrier Chairman and CEO William Furman says the company’s new “Tank Car of the Future” design “is intended to meet anticipated new industry and government standards for tank cars transporting certain hazardous material. Greenbrier is addressing the tank car safety issue on two fronts: by supporting a Tank Car of the Future, and through offering retrofit alternatives for the legacy fleet, including our most recently built CPC-1232 tank cars, as may be appropriate. This allows the industry to take immediate steps to improve public safety. It also preserves the massive investment in tank cars now in service, by extending the time these cars could be used in hazardous material transportation as they ultimately transition over time to less hazardous service. The Department of Transportation has yet to rule on industry recommendations to adopt the newer and safer CPC-1232 standards submitted to them in March 2011. These were subsequently mandated by the Association of American Railroads on tank cars ordered after October 2011.”

“As of November 2013, there were 272,100 DOT-111 tank cars in service in North America, of which 255,000 were of the older legacy design,” said Furman. “Among those tank cars, 170,000 were in hazardous transport, with 68,000 tank cars in crude oil and ethanol service. In order to respond to immediate safety concerns, and in anticipation of future action by the DOT, Greenbrier is also introducing retrofits for legacy DOT-111 cars and newer cars that meet the current CPC-1232 standard mandated by AAR. Retrofit options for the legacy DOT-111 tank cars will include high-flow pressure relief valves, head shields, top fittings protection, and thermal protection. It is expected that appropriate retrofit choices could allow extended service for DOT-111 tank cars as these cars are placed in lower-risk service over time. Industry research has shown that bottom and top appurtenances on the legacy DOT-111 tank cars are impacted in high speed derailments. Greenbrier’s proposed retrofit is targeted to improve these tank car features, and adds head shields, to achieve better performance in a derailment event.”

Greenbrier will also provide retrofit offerings for newer tank cars built under the AAR’s CPC -1232 standard, which applies to all tank cars ordered after October 2011. Greenbrier’s retrofit package for newer CPC-1232 cars includes high-flow pressure relief valves and improved bottom outlet valve handles for any CPC-1232 cars in crude and ethanol service that were not originally equipped with these features.

“Combined, these retrofits can meaningfully improve the safety performance of both car types in continued service,” said Furman. “Greenbrier expects its Tank Car of the Future and retrofit offerings will comply with anticipated Class I rail carrier requirements as well as pending regulatory actions by the U.S. and Canadian governments. Our retrofitting work, as part of our Wheels, Refurbishment & Parts segment, will not materially impact production rates for new builds as part of our Manufacturing segment.”

“Greenbrier has a rich history of designing and building the world’s most durable tank cars for delivering sensitive materials,” Furman noted. “For more than 30 years, our Wagony Swidnica facility in Poland has built all types of pressure tank and specialty cars for the Western European rail system. European tank car service is highly regulated, and typically consists of shorter, faster trains than in the U.S. and North America, with many advanced safety features and an excellent safety record for hazardous materials service.

Greenbrier says it can build tank cars at a rate of 4,000 cars per year in North America, and is increasing its capacity “in light of higher demand for tank cars related to the energy renaissance in America.” As of Nov. 30, 2013, 47% of Greenbrier’s backlog consisted of tank cars “that are almost entirely the more advanced and safer CPC-1232 tank cars and pressure cars. Greenbrier no longer produces the legacy DOT-111 tank car for use in flammable service.”

“Greenbrier will collaborate with industry leaders to achieve a shared goal of providing the safest means of transportation of crude oil and ethanol by rail,” said Furman. “Railroads already have addressed operating practices to improve safety, while energy and chemical shippers are evaluating the content of their commodities to verify proper packaging to protect the public and the environment.” 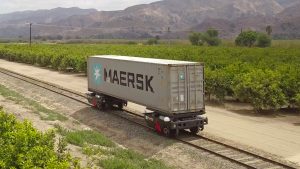