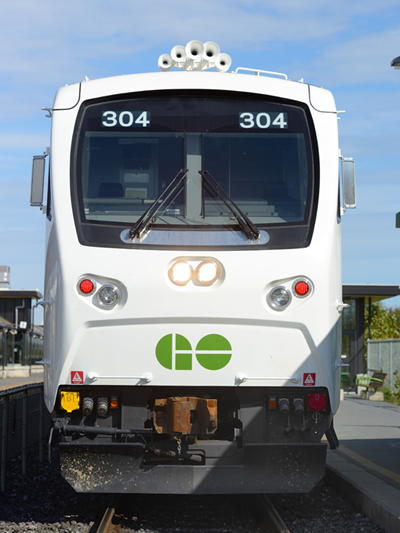 Up until now, GO Transit’s Bombardier Transportation BiLevel cab cars have been identical in appearance to their companion trailer coaches, giving the appearance that the train is travelling “backwards” when operating cab car-forward, by some observer accounts. That is beginning to change.

The new design is a radical departure from its flat-faced predecessor. Bombardier’s BiLevel cars, in service at many North American transit agencies, haven’t changed their basic appearance since they were originally designed by GO Transit and Hawker Siddeley Canada in the mid-1970s as a more efficient replacement for GO’s original single-level coaches and cab cars. Later coaches were manufactured by Urban Transportation Development Corporation/Can-Car and finally Bombardier, who now owns the designs.

There are more than 1,200 Bombardier BiLevels in service today at 14 different locations across the U.S. and Canada; almost all have been built at Thunder Bay and Bombardier’s plant in Plattsburgh, N.Y.