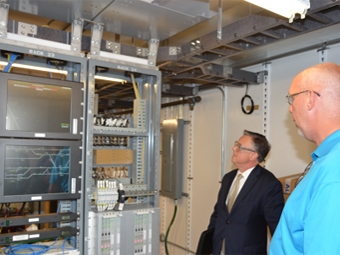 Szabo (seen in photo at left) linked the tour, and the value of PTC, to the Obama Administration’s Grow America Act, a four-year $302 billion reauthorization bill now before Congress. If passed, the measure would provide $19 billion for rail, including $2.3 billion to help regional passenger rail lines deploy and implement PTC systems.

During a teleconference Friday, Szabo observed it was “great to learn about [Siemens’] efforts firsthand,” and noted PTC development has “caused Siemens to hire an additional 100 people, including about 25 to 30 at the Louisville plant,” benefitting local communities.

Siemens Freight and Products Segment, Rail Automation CEO Kevin Riddett said it was “a pleasure to host Mr. Szabo today” at the Louisville facility, saying the FRA administrator got to “see firsthand the technology we’re developing.”

Asked by Railway Age whether FRA saw PTC benefits beyond the emphasis on safety, Szabo replied, “We believe advancing PTC advances three pillars—safety, reliability, and efficiency of the network. PTC helps in all three areas in that regard,” including “capacity enhancements that industry will be able to generate.”

Added Riddett, “Safety is the primary goal of PTC. But I think as a result of that, you gain efficiency, and you improve on-time delivery of services to passengers.”

Asked whether the congressional deadline for mandating PTC was an issue, Szabo said, “We are requesting authority from Congress for a more rational approach to [PTC implementation], and hopes Congress will “give FRA the tools needed to properly balance the legitimate challenges the railroads are facing. And they’re real.” Szabo said FRA seeks to balance industry challenges involving implementation “with the need for accountability,” and is asking Congress for authority “for provisional certification.”

Szabo, in a statement prior to the teleconference, called PTC technology “the backbone of the next generation of safety” and “a powerful tool to help us mitigate human error and further reduce the number of train accidents.”