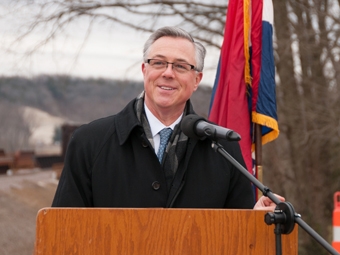 Federal Railroad Administrator Joseph C. Szabo will be stepping down from the post he has held since April 2009 and, effective Jan. 1, 2015, will be on staff at the Chicago Metropolitan Agency for Planning (CMAP)—effectively returning to his Chicagoland roots.

“I am pleased to announce that Joe Szabo will be joining the CMAP staff as a Senior Fellow beginning in January 2015. Joe is currently the Administrator for the Federal Railroad Administration, where he has served since April 2009. Many of you will remember him as the former mayor of Riverdale, Illinois, and in that capacity he served as vice chair of our Council of Mayors executive committee. Joe also served on the Chicago Metropolis 2020 executive council and as a member of the Metropolitan Planning Council.

“Joe brings a long history of transportation and local government experience to this position. As a Senior Fellow, which is a two-year appointment, he will play a leadership role in major policy-related projects that include infrastructure funding, coordination with local officials to develop and implement policies, and development of national transportation policy in cooperation with other major metropolitan regions and our national associations. Joe’s experience in freight, public transit, and intercity rail will also strengthen our role on these issues.

“We look forward to Joe’s return to the Chicago region and to having him on the CMAP staff.”

In recent months it has been speculated that Szabo could be departing the FRA. Railway Age first broke the news that Szabo’s job was in jeopardy following his attempt to mandate two-person crews (see Frank Wilner’s April 11, 2014 blog, “Data drought haunts FRA crew-size mandate.” See also “Is FRA’s Szabo headed to the STB?” Sept. 29, 2014).

Joe Szabo is the 12th Federal Railroad Administrator (FRA) and was the first to come from the ranks of rail workers. He is a fifth-generation railroader who for many years worked commuter and freight trains as a conductor in the greater Chicago area. From 2006 to 2009, Szabo was Vice President of the Illinois AFL-CIO. He served as Mayor of Riverdale, Illinois, a member of the South Suburban Mayors Transportation Committee, and Vice Chairman of the Chicago Area Transportation Study’s Executive Committee. In 2002, he chaired the Governor’s Freight Rail Subcommittee and, in 2005, was assigned by the United Transportation Union International to the FRA’s Railroad Safety Advisory Committee (RSAC), where he participated in the development of rail safety regulations. Szabo has served on the Executive Council of Chicago Metropolis 2020, focusing on Land Use Planning and Transportation issues and was a member of the Chicagoland Metropolitan Planning Council.

In a statement to FRA staff, Szabo said that “safety is the North Star for this agency and your relentless drive for continuous safety improvement resulted in a near 50% reduction in accidents and injuries over the past decade. We achieved an all-time record best for rail safety in 2012—and then achieved a new record best in 2013. And our work is not done until new record bests in safety are achieved. As a 38-year veteran of the rail industry—one who worked out in the ranks—the most meaningful improvement to me was the dramatic drop in employee fatalities to a new record low. Over the course of my railroad career, I’ve lost five good friends to on-duty fatalities and, like most rail workers, survived my share of close calls in the workplace. In 2008, the year before I came to FRA, 26 rail workers perished in on-duty fatalities—a rate of more than two a month.  Through your good work, we drove that down to a record low number of 14 employee fatalities in 2013—still too many, but a remarkable improvement. Now, ten months into 2014, we are at 5 fatalities for the year and getting so close to the ultimate goal of zero. I’m counting on the practices we’ve put into place, particularly proactive programs like Confidential Close Calls Reporting, to get us to zero in 2015.”

“Together we gave life to the country’s largest investment in passenger rail in more than two generations,” said Szabo. “Despite the lack of a predictable, dedicated funding source for rail, we worked with our state partners to advance a foundation of sound transportation planning and a high level of project readiness. We have strengthened both our ability and our state partners’ ability to deliver good projects on time and on budget. While this foundational groundwork is often invisible to the public, it is fundamental to future success. Due to your good work, the pipeline of rail projects has never been stronger and states and regions are ready to execute as predictable, dedicated funding becomes available.

“Meanwhile, meaningful progress is being made in regions across the country. We’ve initiated NEC Future, the first comprehensive plan for the Northeast Corridor since the 1970s; California High Speed Rail is on solid footing and there is no longer any doubt of the project becoming reality; and in the Midwest, passengers will soon enjoy sustained speeds of 110 mph over a majority of the Chicago-St. Louis and Chicago-Detroit routes, with reduced trip times and improved reliability. In the Pacific Northwest, the Southeast, and Northeast investments are now coming to fruition that reduce trip times, enhance reliability and expand service.” “My passion for railroading has been enriched by every person working at the FRA,” Szabo said. “Please know that I take this with me to my new role in public service. We have two more months together and much work remains to be done. So stay focused, keep saving lives and enhancing mobility for Americans. And thank you for all that you do, I’m proud of every one of you.”