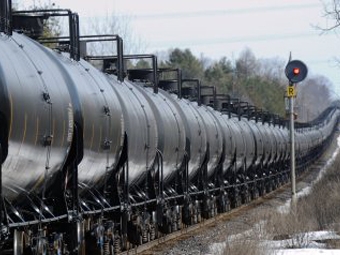 The Federal Railroad Administration on July 22, 2015 sent a reminder to railroads transporting crude oil that the Emergency Order issued May 7, 2014 (Docket No. DOT-OST-2014-0067) requiring them to notify State Emergency Response Commissions (SERCs) and Tribal Emergency Response Commissions (TERCs) of the expected movement of Bakken crude oil trains through individual states and tribal regions remains in effect and “will be made permanent,” as previously announced.

The EO stipulates that trains hauling one million gallons or more of Bakken crude oil (approximately 35 tank cars) are subject to the SERC/TERC notification requirements. The EO also directs railroads to include estimated volumes of crude oil, the frequency of anticipated train traffic, and the route the crude oil will be transported. Contact information for at least one individual at the host railroad must be provided as well. In May, the Department of Transportation (DOT) announced that it would make the notification requirements of the Emergency Order permanent.

FRA’s reminder stated, in part: “As you will remember, on May 7, 2014, DOT issued an Emergency Order requiring railroads to notify State Emergency Response Commissions (SERCs) and Tribal Emergency Response Commissions (TERCs) of the expected movement of 1,000,000 gallons or more of Bakken crude oil in a single train through the state. The emergency order required that railroads update SERCs and TERCS when a significant increase or decrease—25% or more in the number of trains per week—in an estimate occurs. Although the preamble to the May 2015 final rule contemplated that the Emergency Order would end in early 2016, the Department has since announced that the Emergency Order will remain in full force until DOT makes the notification requirements permanent through rulemaking. To be clear: Railroads transporting crude oil must continue to provide the information required by the Emergency Order to SERCs. These notifications should also be updated in a timely manner, as specified in the order and subsequent frequently asked questions. FRA will continue with random spot checks and regular compliance audits to ensure that states, local communities and first responders have the information necessary to respond to a possible accident. FRA will take enforcement actions as necessary to ensure compliance.”

FRA also restated the portion of the May 2015 PHMSA rulemaking on hazmat tank cars pertaining to “21st century electronically controlled pneumatic (ECP) brakes that activate simultaneously on all tank cars, reduce the distance and time needed for a train to stop, and keep more tank cars on the track if a train does derail.”

Railroad and shippers have voiced strong objections to the ECP requirement, saying braking distributed via mid-train locomotives and end-of-train devices would be just as effective as ECP.

The American Petroleum Institute in May said the ECP requirement “will further stress an already impossible timeline for total fleet renewal. It warned that oil shortages will result as existing tank cars are withdrawn before builders can replace them: “We support upgrades to the tank car fleet and want them completed as quickly as realistically possible. The railcar manufacturing industry’s own calculations show it does not have the shop capacity to meet the retrofit timeline announced today, which will lead to shortages that impact consumers and the broader economy.”