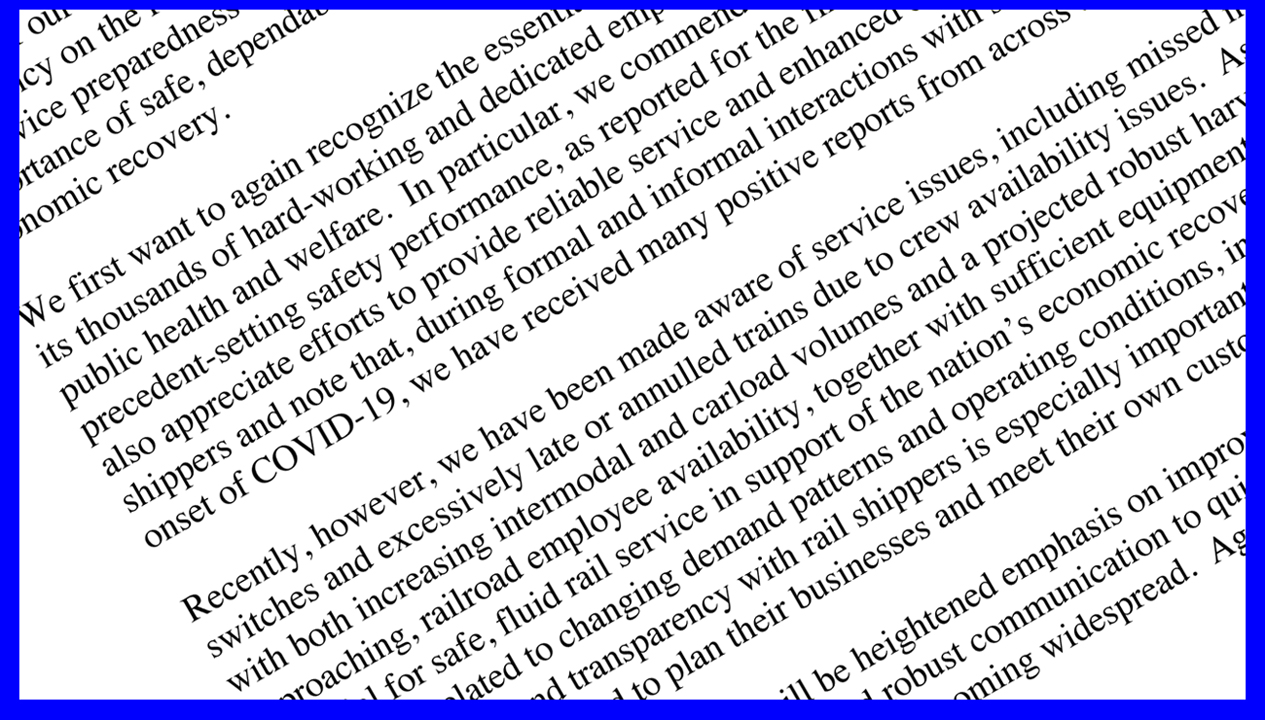 “As part of our agencies’ ongoing oversight efforts on the effects of the COVID-19 national emergency on the rail industry and service reliability, and following previous correspondence on service preparedness and safety requirements, we write today to reemphasize the importance of safe, dependable rail service as the nation works to restore jobs and promote economic recovery.

“We first want to again recognize the essential work of the freight rail industry, represented by its thousands of hard-working and dedicated employees, delivering critical products vital to public health and welfare. In particular, we commend the rail industry for achieving its precedent-setting safety performance, as reported for the first five months of this year. We also appreciate efforts to provide reliable service and enhanced communication to rail shippers and note that, during formal and informal interactions with stakeholders since the onset of COVID-19, we have received many positive reports from across the country.

“Recently, however, we have been made aware of service issues, including missed industrial switches and excessively late or annulled trains due to crew availability issues. As you know, with both increasing intermodal and carload volumes and a projected robust harvest fast approaching, railroad employee availability, together with sufficient equipment resourcing, is essential for safe, fluid rail service in support of the nation’s economic recovery. Given the challenges related to changing demand patterns and operating conditions, increased communication and transparency with rail shippers is especially important to ensure they have the information needed to plan their businesses and meet their own customers’ needs.

“It is our expectation that there will be heightened emphasis on improving employee availability, equipment resources, and robust communication to quickly resolve service issues as they arise and to prevent them from becoming widespread. Again, we commend the rail industry for its efforts during this challenging time for our nation, and we look forward to continuing to work with you to promote a safe and reliable rail network.”

Editor’s Note: A few days after this was published, I received some commentary from a retired railroader and union official. Richard S. Prone is a retired freight and passenger locomotive engineer, and a former BLET Division 312 (Boston) Local Chairman. He wrote:

“I had to laugh at the letter of admonishment scolding the Class I freight railroads for poor service just prior to the Republican National Convention. Wow! How perceptive! They must’ve had a joint epiphany that spurred them into action addressing the shortcomings of the farcical phenomenon known as PSR (Poor Service Routinely).

“As experienced railroaders know, PSR was designed exclusively to eliminate jobs and idle locomotives to attract stockholders by improving the railroads’ sacrosanct operating ratios. Who cares about the shippers who only load a dozen cars a week? That’s what trucks are made for. Who needs that local freight?

“You want to talk PSR? In the darkest days of the Penn Central during the 1970s, four TrailVan trains left Boston’s Beacon Park Yard between 7:30 pm and 1 am, six days a week. We picked up blocks of TOFC and containers at Worcester and Springfield, where yardmasters prioritized the moves to make the prearranged departure times. At Selkirk, N.Y., relief crews were waiting at designated locations in the yard to take over and forward the trains to Chicago and St. Louis via the 70 mph Mohawk and Buffalo Divisions. Standard power was four GP-40s. The crew change took 5-10 minutes, tops.

“With the notable exception of BNSF, the railroads seem quite content to abandon shippers and let their market share continue to shrink. Meanwhile, our highways are being overwhelmed by larger and heavier trucks, many of which are carrying commodities once moved by rail. Unless the railroad executives’ mindsets change, this downward trend will continue, making the Class I’s less and less a factor in the national movement of freight.”