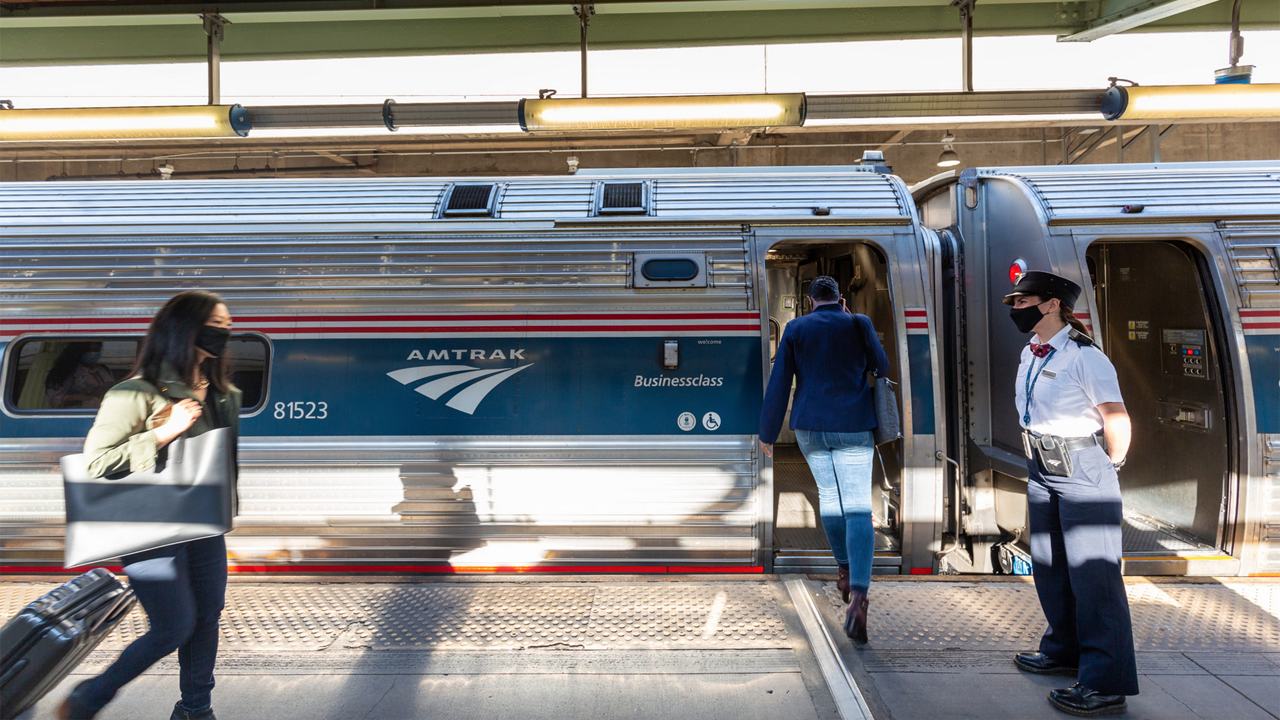 The FRA report found that Amtrak trains experienced approximately 1.3 million minutes of delay during first-quarter 2022, up 9% from the previous quarter. System-wide, first-quarter 2022 train-miles were up 8% from fourth-quarter 2021, coming in at 8,790,595 train-miles, as Amtrak continued to restore service following the pandemic. (Amtrak Photograph)

The Federal Railroad Administration (FRA) has released a report measuring the performance and service quality of Amtrak intercity passenger train operations for first-quarter 2022 (ending Dec. 31, 2021). Among the findings: the Auto Train, Capitol Limited and Sunset Limited were delayed most.

The report is the first to use all metrics described in FRA’s November 2020 final rule, which was published after a nearly 10-year battle involving Amtrak and its host freight railroads that twice reached the U.S. Supreme Court; they are grouped into the categories of on-time performance (OTP) and train delays, customer service, financial performance, and public benefits. The final rule requires Amtrak and the host railroads to certify Amtrak schedules, and sets an OTP minimum standard of at least 80% (defined as no later than 15 minutes after the scheduled arrival time) for any two consecutive calendar quarters. (Scroll down to download report.)

The FRA report, published May 17, found that Amtrak trains experienced approximately 1.3 million minutes of delay during first-quarter 2022, up 9% from the previous quarter. System-wide, first-quarter 2022 train-miles were up 8% from fourth-quarter 2021, coming in at 8,790,595 train-miles, as Amtrak continued to restore service following the pandemic.

Freight train interference was the largest cause of delays in first-quarter 2022, the report found, with 299,252 minutes—22% of total delay minutes—an increase of 12% from the previous quarter. Responsible for 92% of the freight train-interference delay minutes: Union Pacific (84,000 minutes), Norfolk Southern (69,116 minutes), BNSF (69,079 minutes), and CSX (54,810 minutes). Other significant causes of delay were unused recovery time, passenger train interference and slow orders, the report noted.

“Customer on-time performance is included in this quarterly report for all routes and trains in operation during the first quarter of FY2022, regardless of schedule status,” according to the FRA report. “The previous report, which covered the fourth quarter of FY2021, did not include route or train OTP for the more than 20 routes that had one or more disputed train schedules on either a section or the entirety of the route.”

According to the FRA, the first-quarter 2022 report “provides the first opportunity to apply the customer OTP minimum standard described in the rule: 80% for any two consecutive calendar quarters. Of the trains that operated in either quarter, 70.4% met the standard, 14.2% did not meet the standard, and 15.4% had either a disputed schedule in FY21 Q4 or did not operate in one of the two quarters.”

The FRA report included responses to Amtrak’s customer satisfaction survey. It found that customers rated the majority of routes (31 of 41) as 80% or higher in terms of overall satisfaction, with only one route below 70% (Auto Train). Several routes, including the Cardinal, Carolinian, California Zephyr and Palmetto, improved their customer service scores from the previous quarter.

“Financial metrics are tracked across several categories, including cost recovery and ridership,” according to the report. “System-wide, Amtrak earned $672 million in adjusted operating revenue and incurred $823 million in fully allocated operating expenses, achieving a cost recovery ratio of 82%. Routes that operated in the first quarter with high cost-recovery ratios include the Auto Train (131%), Illini/Saluki (124%), Northeast Regional (115%), and Hiawatha (114%).”

Public benefits metrics, which are reported annually, have been included for the first time in the first-quarter 2022 report; they cover all of FY2021. “The public benefits metrics track connectivity, missed connections, community access and service availability across Amtrak’s network,” according to the report. “In FY2021, 12.4% of Amtrak trips included a connection to another route: 6.4% of Northeast Corridor trips, 16.6% of State-supported trips, and 17.7% of Long Distance trips. Of all multi-leg Amtrak trips in FY2021, 2% included a missed connection, with the highest number on the San Joaquins, Pacific Surfliner, and Southwest Chief routes. In FY2021, Amtrak served 67,835 riders (0.56% of all riders) in areas not well-served by other modes of intercity transportation,” such as air or intercity buses.

FRA said it plans to develop additional reports and tools “to make viewing and analyzing data in the quarterly reports more accessible for stakeholders and the public.”