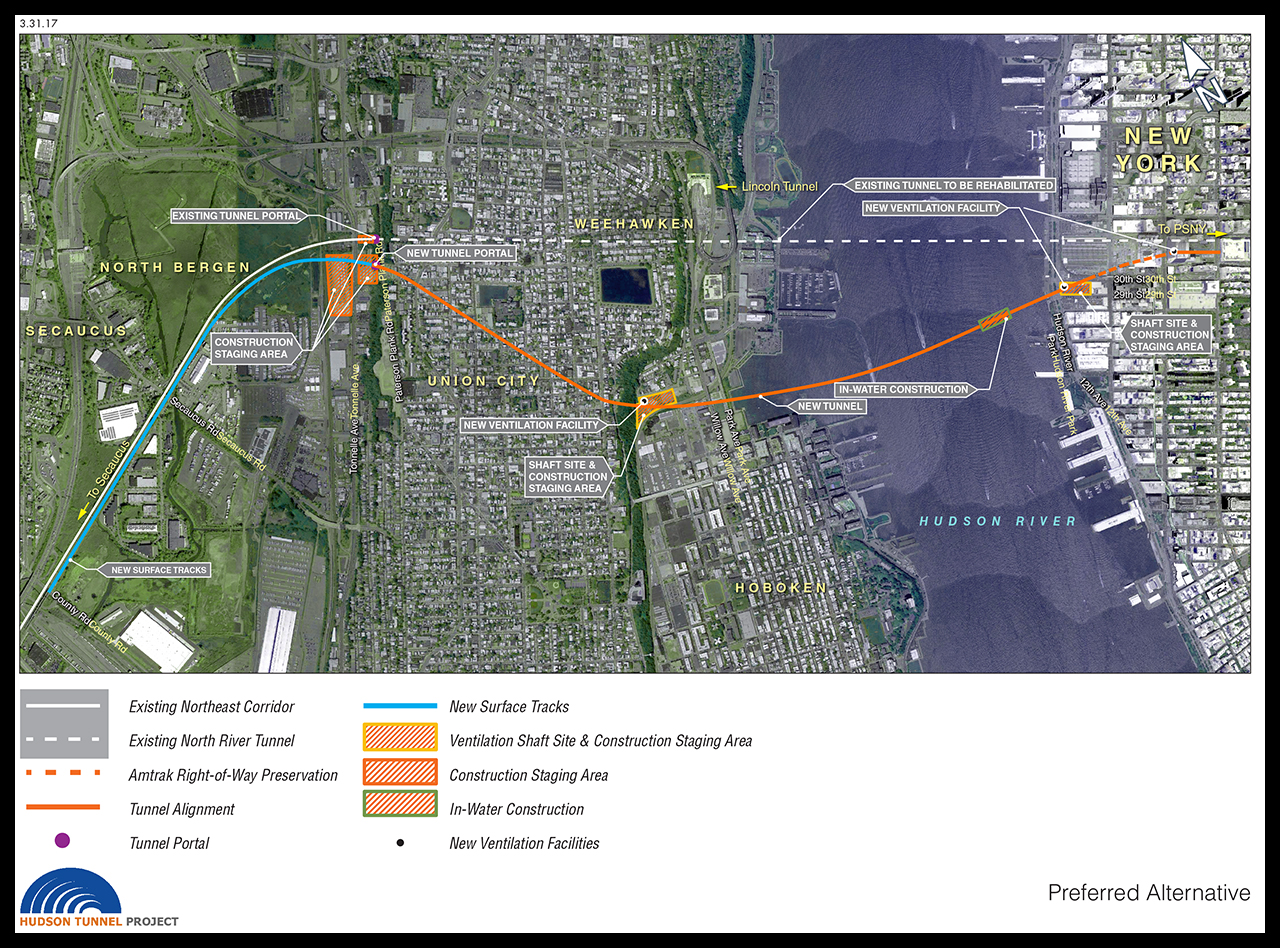 The Gateway Program Project Partners—comprising the Port Authority of New York and New Jersey (PANYNJ), Gateway Development Commission, Gateway Program Development Corp., New Jersey Transit, the states of New Jersey and New York, and Amtrak—provided FTA with the documentation on Aug. 27, supporting its request for the project to be part of the U.S. Department of Transportation’s FY 2023 budget proposal for the CIG Program.

In May, FTA and the Federal Railroad Administration issued a Final Environmental Impact Statement (Final EIS) and Record of Decision (ROD) for the politically controversial Hudson Tunnel Project portion of the Gateway Program—stalled by the Trump Administration but rapidly rescued and advanced by the Biden Administration.

The $12.3 billion project covers—for funding and financing purposes—construction of a new two-track rail tunnel beneath the Hudson River; comprehensive rehabilitation of the existing 110-year-old North River Tunnel; and completion of the third and final section of the Hudson Yards Concrete Casing.

The new financial plan (download outline below) “recalculates and strengthens financial commitments by the project partners based on an updated cost estimate accounting for the four-year delay in the project during the previous Administration,” according to the Gateway Program Development Corp. announcement. Major construction on the new tunnel is slated to begin in August 2023 and the Hudson Tunnel Project’s construction cost is estimated at $12.3 billion, which includes $10.1 billion for the new tunnel and $2.2 billion for full rehabilitation of the existing tunnel.

The construction cost estimate is down from the $12.7 billion price tag from 2017, but represents an increase from 2020 “due to time-driven escalation and the continuing need to push back the calendar for beginning major construction,” Gateway Program Development Corp. said. “Overall, the Project Partners have taken more than $2 billion out of the cost estimate, including $1.4 billion based on advanced design work in the 2019 filing and more than $900 million in property acquisition estimates since Amtrak was able to acquire a major Manhattan property in recent weeks, moving quickly after the U.S. Department of Transportation finalized its environmental review under the new Administration.

“The Partners also commit to aggressively managing cost and schedule during the procurement and construction of the project, incentivizing contractors and seeking opportunities for early work to further mitigate cost and schedule risk.”

The new financial plan seeks about $5.6 billion in CIG funding, or approximately 44% of the CIG-eligible project costs. The states of New York and New Jersey and PANYNJ have made more than $6 billion in commitments toward estimated construction costs “to support the [Gateway Development] Commission’s borrowing of low-interest federal loans,” according to Gateway Program Development Corp., which also reported that Amtrak has “strengthened and demonstrated its commitment toward contributing $1.4 billion toward the Project’s construction costs.”

“Construction on the Hudson Tunnel Project cannot begin soon enough for the thousands of NJ Transit customers who must continue to rely on the century-old tunnel daily,” said Balpreet Grewal-Virk, Gateway Commission Co-Chair and New Jersey Commissioner. “This financial plan is a major step toward finally putting shovels in the ground and getting to work building the rail infrastructure we need for the economy of the future.”

“Amtrak is pleased to have upheld its commitment to the Hudson Tunnel Project by completing the acquisition of New York property needed for a future ventilation and emergency egress shaft,” said Tony Coscia, Gateway Commission Vice Chair and Amtrak Board of Directors’ Chairman.