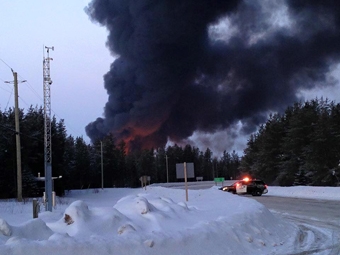 At first sight, the March 7, 2015 Reuters bulletin looked like an accidental re-filing of a three-weeks-old news flash: “A Canadian National Railway train carrying crude oil has derailed near the Northern Ontario community of Gogama, with crews reporting a fire, but no injuries.”

Unfortunately, the repetition was not an error by a fatigued overnight wire service editor. There was, indeed, a second strike of crude oil train fireballs in the same vicinity—again closing CN’s transcontinental main line and demonstrating, once more, that the regulatory changes under consideration simply do not address the underlying root cause of oil train fires and explosions: the presence in crude oil of flammable liquids that create explosive gases, those liquids either purposely added, as with “dilbit” or “synbit,” or inherent in the oil, as with Bakken crude.

This most recent derailment, involving 10 cars and the by-now-familiar fireballs, occurred two miles southwest of Gogama, an 18-mile crow’s flight from CN’s earlier, seven-car Valentine’s Day derailment and explosion. The lading then was dilbit, a blend of goopy Alberta bitumen and highly volatile diluents (thinners) such as naphtha added to make it flow. This time the cars were loaded with a different bitumen-based product from northern Alberta, synbit, which is bitumen diluted with synthetic crude oil—which itself is bitumen partially refined to remove carbon, sulfur, and nitrogen and then boosted with the addition of hydrogen extracted from natural gas. This is the first major explosive derailment involving synbit.

As such, bitumen from the Alberta tar sands must now be considered as suspect as Bakken light crude when it comes to transport by rail.

A bridge crossing the Mattagami River system was damaged in the derailment, and five of the train’s CPC-1232 tank cars were partially submerged in the icy waters, some of them on fire. The train did originate in Alberta, a source for both diluted bitumen (either dilbit or synbit) mined from the northern tar sands and conventional crude, and was on its way to an unidentified Eastern Canadian refinery.

This odds-defying reprise in the remote wilds of northern Ontario was like a testy reminder from an impatient deity: The two-year lucky streak that has spared other North American communities from the fate of Lac-Mégantic cannot run indefinitely. Familiar big city names may well substitute for the backwaters of Gogama, Aliceville, Casselton, Plaster Rock, Boomer, and Galena in future reports of exploding oil trains. That warning comes from both eminent railroaders and the U.S. Department of Transportation itself.

The Associated Press reported Feb. 23 that since June 2014 the U.S. DOT has maintained silence on its own forecast of tank car disasters in the decades ahead: “The federal government predicts that trains hauling crude oil or ethanol will derail an average of 10 times a year over the next two decades, causing more than $4 billion in damage, and possibly killing hundreds of people if an accident happens in a densely populated area.”

Then, March 4, Canadian Pacific CEO Hunter Harrison revealed that his company’s governing board would like to opt out of some dangerous goods transportation, despite its profitability. Harrison said common carrier rules should change to allow railroads to refuse to carry dangerous goods, particularly through vulnerable cities. This is a direct challenge to the prevailing principle that requires railroads to haul anything that conforms to government regulations. That social compact implies that the regulators will do their best to protect both the railroad and the public.

“Our board of directors looked at this very carefully and asked, ‘What kind of exposure do we have, and what we are exposing the public to by hauling some of these commodities?’” Harrison said. “And in spite of the bottom line [benefit], we’ve said we might get out of this business.”

Proposed oil train regulations under review by the White House Office of Management and Budget do not prescribe heat treatment of crude oil to boil off explosive gases, as is routinely practiced in Texas before the shipment of light crudes.

Reuter’s reported March 5 that President Obama himself expressly refused to allow DOT regulators to call for such defusing of dangerous crude, leaving the matter instead to oil-producing states such as North Dakota.

The Wall St. Journal reported March 2 that the Bakken crude that blew up in West Virginia in Feb. 16 CSX derailment was just barely above the volatility threshold that would be allowed by new North Dakota rules that come into effect April 1. So-called “conditioned” crude from the state will still be as explosive as gasoline, using the industry’s favored measure, vapor pressure. The 13.7 psi vapor pressure allowed under the state’s regulations is actually a bit higher than the 13.5 psi common to gasoline.

SAVE THE DATE for Railway Age’s second annual Crude By Rail Conference this September. Click here for details. 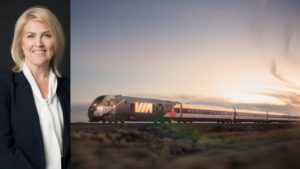