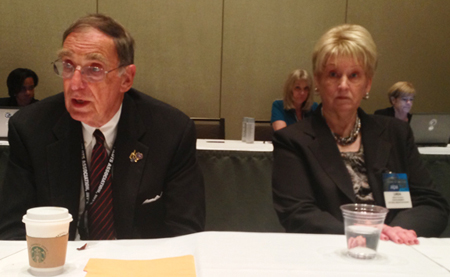 Gerald W. (Trey) Fauth III will be nominated by President Trump to the second of two open Republican slots on the three-member National Mediation Board, according to a June 22 White House press release.

Trump on June 20 announced his intention to nominate Republican Kyle Fortson to the other Republican seat.

Democrat Linda Puchala, who has been an NMB member since mid-2009, is expected to be renominated to a third term, but there has been no White House announcement.

Formal nominations follow notices of a presidential “intent” to nominate. Nominees then face a confirmation hearing—before the Senate Labor Committee for NMB nominees—as a prelude to a Senate floor vote if the committee so recommends. There is no timetable, although the formal nominations of Fauth and Fortson are expected soon. As the NMB statute permits its members to remain in office beyond the expiration of their term until the Senate confirms a successor, there is not necessarily a rush to renominate Puchala, although Senate tradition suggests that confirmation hearings will await a formal nomination of Puchala or another Democrat.

Fauth is expected to take the seat of Democrat Harry R. Hoglander (pictured, with Puchala), who has been an NMB member since 2002. Fortson is expected to take a now-vacant Republican seat previously held by Nicholas Geale, who voluntary departed the NMB earlier this year for a Trump appointment in the Labor Department not requiring Senate confirmation.

Confirmations of Fauth and Fortson will give the NMB its first Republican majority since 2009. The chairmanship rotates among all three members annually.

Fauth has been associated with railroad economics and consulting since 1978 at G.W. Fauth & Associates, which was founded in 1957 by his late father, and at which he is now president. From 1999 to 2003, he served as chief of staff to STB Republican member Wayne O. Burkes, where he was involved with labor arbitration and dispute resolution techniques arising from rail mergers and the resultant harmonizing of separate collective bargaining agreements. He earned an undergraduate degree in history and government from Hampden Sydney College.

Fortson, an attorney, has been labor policy director for the Senate Labor Committee since 2010, and from 2004 to 2010 was the committee’s labor counsel. Earlier in her career she was a policy analyst for the Senate Republican Policy Committee, legislative counsel to Sen. Tim Hutchinson (R-Ark.), and judiciary counsel to Rep. Spencer Bauchus (R-Ala.). She earned an undergraduate degree in history from the University of Colorado in 1996, and a law degree from The George Washington University in 1999. Her husband, Joseph B. Fortson IV, is a congressional lobbyist—currently for consumer research firm Nielson, and previously for Apple—and a former counsel to the House Energy and Commerce Committee.