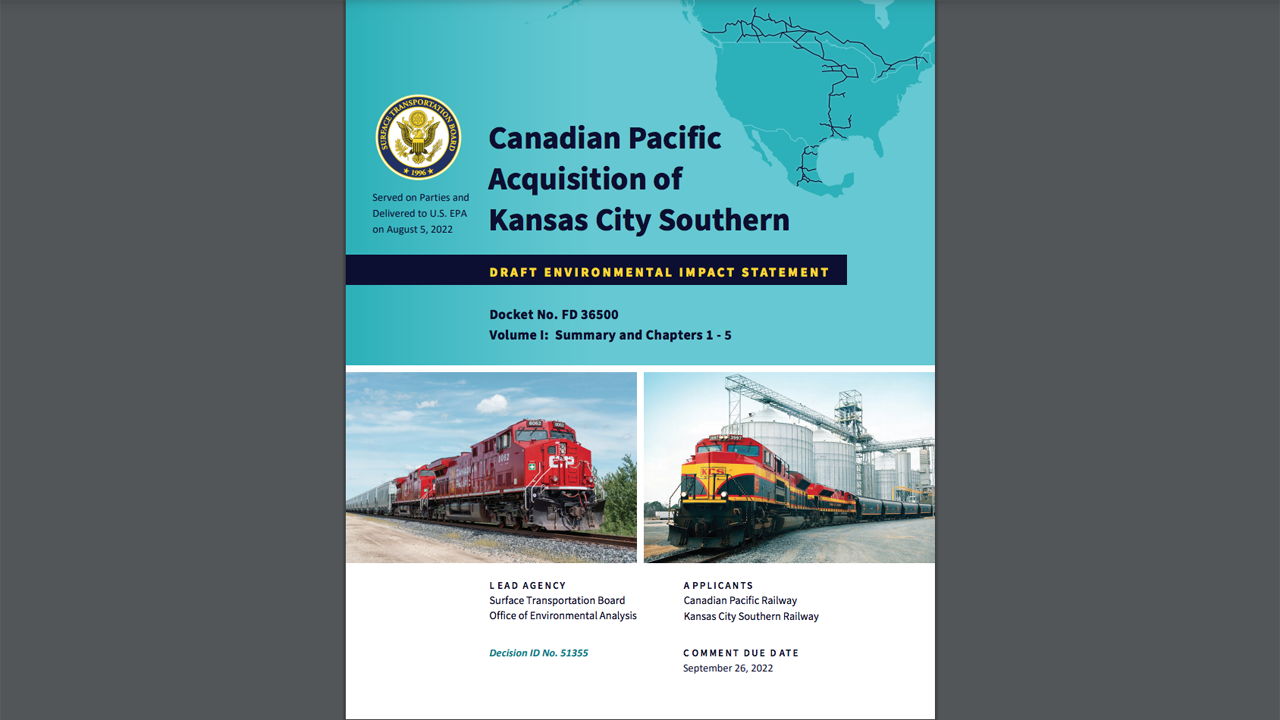 The Draft Environmental Impact Statement (EIS) analyzing Canadian Pacific Kansas City’s (CPKC) potential impacts on the environment was issued Aug. 5 by the Surface Transportation Board (STB); comments are due by Sept. 26, 2022.

STB’s Office of Environmental Analysis (OEA) has been working on the Draft EIS since February 2022, when it decided on the scope of its environmental review of the proposed Canadian Pacific–Kansas City Southern combination, CPKC. (In September 2021, the two Class I railroads agreed to merge; two months later, STB accepted for consideration their merger application.)

“The combined CPKC network would include approximately 20,350 miles of track in total, including approximately 8,600 miles in the U.S., and would extend from Canada, through the U.S., and into Mexico,” according to the Draft EIS. “The Applicants [CP and KCS] expect that the proposed acquisition would create new operational efficiencies and would divert freight from other railroads and from trucks. As a result, rail traffic would increase on some rail lines in the combined CPKC rail network [ranging from eight to approximately 14.4 additional trains per day, on average, on CP and KCS rail lines between Chicago, Ill., and Laredo, Tex.].

“To support this expected increase in rail traffic, the applicants plan to make capital improvements within the existing rail right-of-way, which would include adding new passing sidings, extending existing sidings, adding a section of double track, and adding facility working track at a total of 25 locations along the combined CPKC network.

“The Board’s Office of Environmental Analysis (OEA) prepared this Draft Environmental Impact Statement (Draft EIS) to analyze the environmental impacts of the proposed acquisition. OEA also considered the No-Action Alternative, which would occur if the Board were to deny authority for CP to acquire KCS. Under the No-Action Alternative, OEA anticipates that rail traffic would only increase on the CP and KCS networks as a result of general economic growth and that the applicants would not add the planned capital improvements. The Draft EIS describes the potential direct, indirect, and cumulative environmental impacts of the proposed acquisition on freight and passenger safety, grade crossing safety and delay, truck to rail diversion, intermodal facility traffic, noise, air quality, climate change, energy, cultural resources, hazardous material release sites, biological resources, water resources, and environmental justice.”

Based on consultation with federal, state and local agencies; consultation with tribes; input provided by organizations and the public; and its own independent environmental analysis, OEA concluded in the Draft EIS that “apart from train noise, which could result in adverse impacts at some locations, the potential adverse impacts of the Proposed Acquisition would be negligible, minor, and/or temporary.”

• That the proposed acquisition “would not result in any adverse impacts” to traffic and roadway systems as a result of truck-to-rail diversions.

• That based on the “existing capacity of local roads serving intermodal facilities where activity could increase as a result of the proposed acquisition, OEA has concluded that increased truck traffic on those roads would not result in any adverse impacts.”

• That “the projected increase in rail traffic from the proposed acquisition would make rail-related noise more frequent, which would result in a higher day-night average noise level (Ldn) at many [noise-sensitive] receptors [including residences, schools, hospitals, nursing homes, and places of worship.” OEA explained that “the applicants have voluntarily proposed mitigation measures to help address potential noise impacts, including a commitment to fund the improvements necessary to maintain existing Quiet Zone designations in communities where the proposed acquisition might otherwise cause the designation to be lost. … OEA is also recommending additional mitigation measures to address noise impacts that would require the applicants to maintain rail and rail beds … , comply with FRA regulations establishing decibel limits for train operations … , consider lubricating curves where doing so would reduce noise … , employ other safe and efficient operating procedures that could effectively reduce noise from train operations … , and promptly respond to communities interested in establishing Quiet Zones. … Even if the Board imposes these mitigation measures, however, OEA expects that the proposed acquisition would result in unavoidable adverse noise impacts.”

• That the proposed acquisition “would not result in an increase in overall air emissions and could result in an overall decrease in emissions,” but it would “change the local distribution of emissions by diverting trains from other rail lines and OEA expects that localized emissions of air pollutants from locomotives would increase along some rail line segments within the CPKC system. In particular, OEA’s analysis shows that the projected increase in rail traffic would result in nitrogen oxides (NOx) emissions in excess of the EPA’s de minimis thresholds in three nonattainment areas for ozone. … The estimated increase in NOx emissions would be less than one percent of the applicable emissions budget for mobile sources in each nonattainment area and therefore should not adversely affect enforcement of applicable State Implementation Plans for the nonattainment areas. Aside from NOx emissions, emissions of all other criteria air pollutants and hazardous air pollutants would be well below de minimis thresholds, and air emissions resulting from the Proposed Acquisition would be minimized by the Applicants’ voluntary mitigation measures for air quality and climate change.”

• That the proposed acquisition “would not adversely affect the transportation of energy commodities or energy efficiency.”

• That the proposed acquisition “would have No Adverse Effect to historic properties listed in or eligible for listing in the National Register. Further, OEA is recommending mitigation requiring the applicants to develop and implement a plan for archaeological monitoring during construction and addressing any unanticipated discoveries of archaeological sites or associated artifacts during construction. …”

• That the projected increase in rail traffic on certain rail lines in the combined CPKC system “would not adversely affect” plants, fish or habitat. Additionally, considering the applicants’ “commitments, OEA, in consultation with USFWS, has concluded that the proposed acquisition may affect, but is not likely to adversely affect the Indiana bat, northern long-eared bat, and Ozark big-eared bat, and would have negligible impacts on other biological resources.”

• That the “probability of an incident occurring that could result in a release of hazardous materials into waterways or onto the ground where it affect groundwater is and would remain very low.” Additionally, OEA has concluded that “the planned individual capital improvements could temporarily or permanently impact between 0.00 and 0.53 acres of surface waters and between 0.00 and 6.43 acres of wetlands, depending on the location. These impacts would be avoided or minimized by the implementation of the applicants’ voluntary mitigation measures and OEA’s additional recommended mitigation measures. … OEA also concludes that the proposed acquisition would have negligible impacts on ground water and water quality.”

• That “noise would affect certain EJ [Environmental Justice] populations [including minority populations, low-income populations, or American Indian tribes, but] noise impacts would not be disproportionately borne by those EJ populations. Indeed, based on OEA’s analysis of the demographic data for census block groups and communities along the combined CPKC network, most receptors that would experience adverse noise impacts are located in non-EJ populations. To minimize noise impacts on EJ populations, OEA is recommending mitigation requiring the applicants to conduct proactive and targeted outreach to minority and low-income populations that would experience adverse noise impacts as a result of the proposed acquisition to provide information about the process for establishing Quiet Zones. … The applicants have also voluntarily proposed mitigation measures related to EJ.”

• That “several reasonably foreseeable projects and actions … could increase passenger rail traffic on certain rail lines in the combined CPKC network at about the same time as the proposed acquisition. Due to the low number of additional passenger trains that these projects could add, cumulative impacts on passenger rail safety, air quality, grade crossing safety, and grade crossing delay would be negligible.”

Individuals, agencies, organizations, tribes and other interested parties may submit written comments electronically through the STB’s environmental comment form, by Sept. 26, 2022. Additionally, oral comments may be provided at one or more of the in-person and online public meetings that OEA will hold during the public comment period, which will cover only the environmental issues raised in the case. In-person public meetings will take place Sept. 12, 2022, in Itasca, Ill.; Sept. 13, 2022, in Davenport, Iowa; Sept. 14, 2022, in Excelsior Springs, Mo.; and Sept. 15, 2022, in Vidor, Tex. Online public meetings will take place Sept. 7, 8 and 19, 2022. For more information on submitting comments and participating in in-person and online meetings, visit the STB-sponsored project website.

STB will hold a separate public hearing on Sept. 28, 29 and 30, 2022, at the agency’s headquarters in Washington, D.C. to hear comments on the merits of CPKC.

Following issuance of the Draft EIS and the 45-day public and agency comment period, OEA is slated to prepare and issue a Final EIS. The Final EIS will respond to the comments on the Draft EIS, present OEA’s final conclusions regarding the potential environmental impacts of the proposed merger, and set forth OEA’s final recommendations to the STB, including recommended environmental mitigation measures. After OEA publishes the Final EIS, the STB is expected to issue its final decision on whether to approve the CP-KCS merger. According to STB, in making its final decision, it will consider the entire record, including the record on the transportation merits, the Draft EIS, Final EIS, and all public and agency comments. If the STB decides to authorize the merger, it may impose conditions on the applicants, including environmental mitigation conditions.