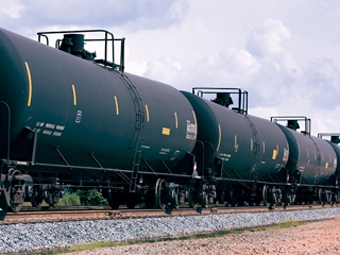 A recent call-in forum on crude by rail conducted by Cowen and Company Managing Director and Railway Age Contributing Editor Jason H. Seidl “helped affirm our view that the final version of the DOT’s safety rules may include some changes to the ones proposed on July 23.”

“We believe that the final draft of the [Notice of Proposed Rulemaking on High-Hazard Flammable Trains and DOT 111 tank cars] could be more friendly to shippers than the first proposal,” said Seidl. “This, along with the removed uncertainty, could put a more positive spin on regulations that are sure to add costs for the industry.”

Retrofitting tank cars to 9/16-inch-thick steel is “a tall order,” said Seidl. “A railcar manufacturing executive on our panel suggested that retrofitting existing 7/16-inch-steel cars to 9/16-inch layers would be a problematic task, as the technology for implementing the conversion may not be currently available. Additionally, such an undertaking may be restricted by tight steel supplies, which could disrupt and prolong production for months. This would exacerbate concerns about the two- to five-year proposed compliance period, which is already viewed as insufficient by many players in the industry. According to our panelist, a more realistic retrofitting of the existing 7/16-inch-steel car fleet would take five to seven years and consist of other improvements, such as top fittings and thermal jackets. If retrofitting to a 9/16-inch-steel layer is ultimately adopted in one or more of the paths to compliance, the Greenbrier Companies could benefit as it already applies this standard to its “Tank Car of the Future” group of tank cars. That being said, we believe that the final version of the rules will include some key changes to the ones proposed on July 23.”

The Cowen panelists agreed that reducing crude oil train dwell time would make more sense than reducing speed. “The consensus opinion seemed to be that enforcing broad speed restrictions may not be the right approach,” noted Seidl. “The panelists indicated that emphasis should be placed on reducing the total time that High Hazard Flammable Trains (HHFTs) spend in populated areas, and slower trains do just the opposite. Additionally, reduced train speeds would require more cars and detrimentally impact the supply chain, potentially resulting in higher dwell times in populated areas. One panelist suggested that CBR regulators should communicate with the groups that have created regulations for other rail-transported hazardous materials, such as chlorine. Such regulations, which rely in large part on reducing dwell time in densely populated areas, appear to have been effective in improving transportation safety.”