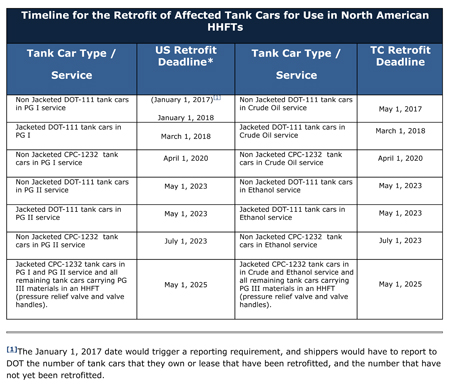 The final spec for the now-official DOT-117 (TC-117 in Canada) non-pressurized tank car adopts the most demanding of the technical requirements first offered for comment in the notice of rulemaking: jacketed and thermally insulated shells of 9/16-inch steel, full-height half-inch-thick head shields, sturdier, re-closeable pressure relief valves and rollover protection for top fittings.

The regulation removes the burden of reporting every oil train movement to state emergency response agencies. Instead, railroads must promptly respond to requests for information initiated by local emergency responders. This should address railroad complaints that business and security concerns were being compromised by state freedom of information laws.

The regulatory package is to be enforced by the department’s sibling regulators, the Federal Railroad Administration (FRA) and the Pipeline and Hazardous Materials Safety Administration (PHMSA).

Cost of the fleet renewal is estimated by the regulators to be about $1.7 billion. Total costs for the entire regulatory package, including train routing and speed restrictions, is projected to be $2.5 billion.

Even as he announced May 1 (jointly with Transport Canada Minister Lisa Raitt) that all unit oil trains must be equipped with electronically controlled pneumatic braking (ECP) by 2023, Transportation Secretary Anthony Foxx vocally anticipated legal challenges from railroads and fleet operators who say the technology is unreliable and unnecessary.

Indeed, railroaders and shippers were quick to declare their objections to ECP requirement.

“This is an imprudent decision made without supporting data or analysis,” said Ed Hamberger, president of the Association of American Railroads. “The ECP brake requirement ordered today by the Department of Transportation is an ‘operational requirement’ and is not part of the PHMSA tank car standard rule making. DOT is requiring that by Jan. 1, 2021 if a train is going to move 70 or more tank cars of crude oil those tank cars must be equipped with ECP brakes. If those tank cars are not equipped with ECP brakes, the train’s speed cannot exceed 30 mph. The requirement for ECP brakes is aimed at tank cars, not locomotives. Railroads don’t own tank cars, they own locomotives. While the requirement for ECP brakes is aimed at tank cars, not locomotives, by default, locomotives will have to be ECP-equipped to be able to move cars with ECP brakes. The decision whether or not to equip tank cars moving crude oil belongs to freight rail customers or tank car owners, not the freight railroads. If tank car owners decide not to equip tank cars intended for crude oil service, railroads must decide whether or not to move trains carrying 69 or fewer crude oil tank cars or travel no faster than 30 mph. Either scenario will decrease rail capacity and have negative consequences on both freight and passenger traffic.”

Speaking for shippers and fleet owners, the American Petroleum Institute said the ECP requirement will further stress an already impossible timeline for total fleet renewal. It warned that oil shortages will result as existing tank cars are withdrawn before builders can replace them: “We support upgrades to the tank car fleet and want them completed as quickly as realistically possible. The railcar manufacturing industry’s own calculations show it does not have the shop capacity to meet the retrofit timeline announced today, which will lead to shortages that impact consumers and the broader economy.”

The requirement to equip tank cars and locomotives with ECP brakes is intended to slow a train with braking force applied simultaneously along its length. Conventional train line braking relies on air pressure releases that occur serially along the length of the train, rather than instantly at each car. Railroads objected to compulsory ECP after it was proposed in the DOT’s notice of rulemaking last August, saying braking distributed via mid-train locomotives and end-of-train devices would be just as effective.

Foxx challenged rail industry claims that ECP is a new and unproven technology by pointing to BNSF and Norfolk Southern, which already operate ECP-equipped unit trains in revenue service (but not yet for oil trains). “We believe ECP is a reliable technology,” Foxx said, adding in the same breath that courts are unlikely to throw out the complete regulatory package in the event that one aspect is successfully contested.

The requirement for ECP braking was the closest thing to a surprise in the suite of final oil train regulations promulgated by the department after review by the White House Office of Management and Budget.

This may be the first time regulators have distinguished between packing groups with respect to tank car choice. Currently, all three packing groups may be carried in identical cars, the only difference being in the hazmat placarding and documentation. The timeline for tank car retirement or retrofitting is also tied to packing group of the lading.

One intended effect is to allow older tank cars to transition from higher-risk crude to lower-risk ethanol service during fleet renewal.Gone from the final rules is the strategy to shift riskier cars to Alberta tar sands service, now that diluted or synthetic bitumen proved itself to be unexpectedly explosive in a pair of midwinter mishaps in northern Ontario.

“The final rule reflects a more refined cost-benefit analysis, but some stakeholders will think the rule does not go far enough to improve that safety of crude-by-rail, and others will think aspects of the rule produce little safety benefit at a very high cost,” noted Kevin Sheys, an attorney with Washington, D.C. based Nossaman LLP, which specializes in transportation law. “    The narrower definition of ‘high-hazard flammable trains,’ which now considers packing group and tank car type, is a significant change and will come as a relief to some railroads and to shippers of flammable liquids in manifest trains.     I anticipate that many railroad and shipper stakeholders will continue to question whether this retrofit schedule is achievable and express concern about tank car capacity challenges.     The limited and graduated rollout of ECP brakes is unlikely to satisfy the regulated industry, which has asserted with one voice that ECP braking systems are untested and produce very little safety benefit. ”

Not suprisingly, The Greenbrier Companies was quick to point out that its “Tank Car of the Future” is, in effect, a DOT/TC-117, strongly suggesting that regulators simply adopted its design as the new spec. “Greenbrier announced its Tank Car of the Future in February 2014, a safer design for crude oil and ethanol service and the transport of other hazardous materials that the USDOT and TC introduced today as the new DOT-117/TC-117,” said Chairman and CEO Bill Furman. “I’m proud to say we’re currently delivering cars to our customers that meet these new standards. Nearly 1,000 of these Greenbrier-designed and built tank cars are already in Class 3 flammable liquids service across North America. With orders in place for more than 2,500 cars of the DOT 117/TC-117 design, safer tanks cars are steadily joining the North American rail fleet. Greenbrier believes that by mandating the new DOT 117/TC-117 tank cars be built with features such as increased shell thickness,  full-height half-inch-thick head shields, minimum 11-gauge jackets, a re-closeable pressure relief valve and thermal protection, the U.S. and Canada have taken steps to mitigate the consequences of train accidents and ultimately enhance public safety. These tank car design improvements produce tangible and immediate safety benefits that far exceed any marginal benefit fromUS DOT-mandated ECP brakes, which Greenbrier has consistently questioned.”

Furman also touted his company’s retrofit capabilities, and commented on the timeline: “Greenbrier is prepared to meet the need for tank car retrofits through GBW Railcar Services (GBW), its 50/50 joint venture with Watco Companies LLC for railcar repair and retrofitting. GBW is making significant new investments in its repair shop capacity to help ensure the industry’s ability to conduct the required tank car retrofits. GBW has obtained commitments from leading tank car owners to perform thousands of tank car retrofits, in the manner described in today’s rule. Through GBW we’ve laid the groundwork to meet the need for tank car retrofits required by the new rule. We look forward to continuing our work with our customers to address the achievable timeline announced today. Greenbrier asserts that a rapid replacement and retrofit phase-out timeline is completely feasible. A report prepared for Greenbrier by Cambridge Systematics  indicates retrofit capacity will range from at least 8,400 to 19,600 cars per year in steady state, and that the unjacketed DOT-111s and unjacketed CPC-1232s in crude oil service could be retrofitted in 3.7 years, while similar cars in ethanol service could be retrofitted in an additional 2.3 years. In addition to examining tank car retrofit capacity, the Cambridge report goes on to note that in 2015 manufacturing capacity for new tank cars is at an all-time high of more than 40,000 units. With manufacturing capacity at these levels, the Cambridge report observes that the entire tank car fleet that is currently operating without advanced safety features could be replaced in less than five years with new cars that meet current standards for safety.”

A summary of the rule can be accessed HERE.

The complete rule can be accessed HERE.