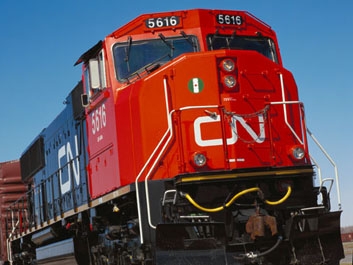 CN “continues to take significant steps to strengthen our railway’s Safety Management System, with the goal of improving the safety of transportation of dangerous goods,” says President and CEO Claude Mongeau.

“CN’s business agenda is anchored on running a safe railway—it’s the overarching imperative in everything we do,” said Mongeau. “We have developed a comprehensive work plan to bolster our overall safety performance and to enhance our strong record of delivering 99.998% of dangerous goods to destination without a release caused by an accident.”

1. Preventing accidents through process, technology, people and investments as part of a sound Safety Management System. “After the tragic Lac-Mégantic accident last July, CN began a thorough review of its safety policy and procedures and has taken a number of steps, including a comprehensive review of its already-robust train securement practices and the implementation of a special program to acquire additional monitoring equipment to enhance its strong technological base for early detection of defects and mitigate the severity of accidents. CN also applied the U.S. OT-55 ‘key train policy’ to freight trains carrying one car loaded with toxic inhalation hazardous materials, or 20 cars loaded with any dangerous goods, and voluntarily extended the policy to its Canadian operations. The policy includes measures on train dispatching, track inspections, and restrictions on train speeds. Finally, CN continues to strengthen its safety culture, particularly with regard to a new generation of railroaders, by revitalizing its training programs and opening two new state-of-the art training facilities in Winnipeg and Chicago later this year.”

2. Addressing the risks associated with older DOT-111 tank cars used in the movement of highly flammable products. “For CN, tank car design is one of the most important systemic issues arising from the Lac-Mégantic accident. The question of tank car robustness is central, and that question is being addressed by the AAR, to which CN belongs, in recent recommendations calling for the retrofitting or phase-out of the old DOT-111 cars used to transport flammable liquids and a reinforced standard for new tank cars built in the future. CN itself is carrying out a gradual phase-out of its small fleet of 183 legacy DOT-111 tank cars used to transport diesel fuel for its locomotives to yard terminals. CN is investing C$7 million to replace all the DOT-111 tank cars it owns outright with 40 new tank cars meeting the latest regulatory standards by the end of this year. The remaining 143 leased DOT-111 cars will also be replaced with a gradual phase-out plan completed as leases mature over the next four years.”

3. Strengthening emergency response capabilities through sharing of relevant information with communities, training support, and mutual aid intervention protocols. “CN believes that the rail industry can enhance safety by working more closely with communities. CN has already done this by launching a comprehensive outreach program to meet municipalities and their emergency responders along its network in order to discuss the nature and volumes of dangerous commodities transported through the communities we serve. This voluntary program is on top of the requirement to divulge such information annually to Canadian municipalities, as announced last fall by Transport Minister Lisa Raitt. CN is urging the implementation of mutual aid intervention protocols, with the participation of other carriers and producers of dangerous commodities. This would help codify emergency response standards and expand response resources in order to be prepared to handle any future rail incidents involving dangerous goods.”

“CN has an unwavering commitment to safety and always strives to deliver responsibly,” says Mongeau. “Between 2003 and 2013, CN’s main line accidents declined by approximately 50% despite increased freight volumes. But we are not stopping there. Our efforts are continuing to make an already solid safety record even better.”