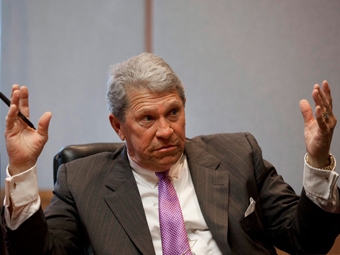 CP is seeking a declaratory order from the STB regarding the use of a voting trust pending the STB’s review of a possible CP-NS merger. CP, the acquiring firm, not NS, the acquired firm, would be placed in trust. Additionally, CP CEO Hunter Harrison would become NS CEO, and CP President and Chief Operating Officer Keith Creel would become CP CEO.

“It is too early to determine whether either a CPRL+NSR merger itself, or a downstream merger involving other major railroads, would degrade national defense,” DOD wrote. “However, the potential certainly exists for either the CPRL+NSR merger or a downstream merger to adversely affect national defense. Therefore, it is critical that no common control of CPRL and NSR occur prior to the Board ruling that such common control, and the merger that cements it, is permissible. Such a ruling should certainly consider the effects of both the CPRL+NSR merger, and any resultant downstream mergers, on national defense. . . . We are troubled by the possibility that Mr. Harrison could become a senior executive at Norfolk Southern in advance of the Board ruling in favor of common control/merger between Canadian Pacific and Norfolk Southern. If Mr. Harrison is a senior executive at NSR he may be placed in a position where he must make business decisions with potentially competing interests.”

A PDF of DOD’s letter to the STB can be downloaded at the link below.

Wrote DOD: “The STB should reject the proposed voting trust structure because it risks altering the competitive landscape between the two railroads and indeed the entire rail system in a way that could not be reversed if the STB rejects the merger. . . .The STB should find that the [CP] proposal fails under each prong of the revised regulatory requirement—it creates unlawful control violations and is against the public interest. . . . CP’s voting trust and management transfer scheme risks interim competitive harm because it will immediately and irreversibly eliminate the independence of NS, effectively linking NS and CP prior to STB review of the proposed merger. The scheme will also make it difficult, if not impossible, for the STB to accomplish effective divestiture if it denies the merger application.

A PDF of DOD’s letter to the STB can be downloaded at the link below.

CP issued yet another white paper, Precision Railroading: Using the CP Model to Build a Leading Transcontinental Railway, “detailing how the precision railroading philosophy—which has been used successfully to elevate CP from industry laggard to leader over the past four years—would transform Norfolk Southern Corp. and eventually build a leading transcontinental railway in North America.”

A PDF of CP’s white paper can be downloaded at the link below.