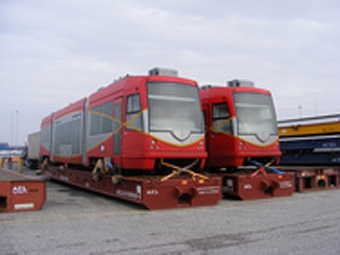 All six of Washington, D.C.'s streetcars, including the youngest three delivered by United Streetcar, LLC, are undergoing what District Department of Transportation (DDOT) describes as pre-revenue operation, generating speculation that DDOT's H Street Line may open just before 2014 ends.

The 2.4-mile line has received safety clearances from the Federal Transit Administration, but must still be certified by the D.C. Fire Department as safe.

Sources told local media the earliest date DDOT could begin passenger service is New Year’s Eve, just before current Mayor Vincent Gray, an ardent champion of streetcar development, steps down from office. Gray had vowed to ensure the streetcar’s debut during 2014, but in recent days has been more circumspect about the goal, though remaining hopeful.

“We’re going to open it as soon as we can,” DDOT Director Matt Brown told local radio station WAMU 88.5. “We intend to run pre-revenue operations for 14 days.”

The H Street line, located in northeast Washington and running east from Union Station, will be the first streetcar operation in the nation’s capital since 1962.