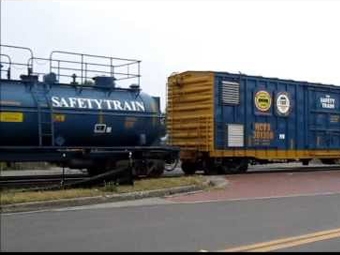 CSX's Safety Train: Energy Preparedness Program, with rolling classrooms and specialized hands-on training, will soon take to the rails on an expanded first responder training initiative. The train will travel over much of the railroad’s crude oil service territory over the next several months.

“As the market for shipping crude oil has grown, so has our commitment to and responsibility for moving those shipments safely and efficiently,” said Elliott. “This year, in light of increased crude oil movements on our network, we have expanded our engagement with first responders and emergency personnel along key routes to include training specific to crude oil movements.”

The CSX Safety Train is comprised of a locomotive, four tank cars, one flat car equipped with a variety of tank car valves and fittings, two classroom cars, and a caboose. CSX hazardous material specialists will lead training sessions with specific instruction on how crude oil is shipped. “The train and instruction will help strengthen CSX’s partnership with first responders and provide a higher state of emergency readiness,” said Elliott.

“As soon as Delaware County asked CSX to arrange for training in preparation for the upcoming crude oil unit trains, they quickly worked with us and their partners to conduct emergency response training for our first responders,” said Edwin J. Truitt, director, Delaware County (Pa.) Department of Emergency Services. “This is what comes from maintaining an effective working relationship with our partners at the railroads.”

Increased emergency response training and tuition assistance are part of a voluntary agreement that U.S. railroads reached with the U.S. Department of Transportation earlier this year. As part of this comprehensive agreement, the railroads have lowered maximum authorized speeds for certain trains carrying crude oil in designated cities, increased track inspections on key oil routes, and agreed to implement additional trackside safety technology.

“The CSX Safety Train is just one of a number of continuing programs through which CSX offers training and recognition to emergency responders and customers,” said Elliott. “Just recently, we presented our Chemical Safety Excellence Award to more than 70 shippers who had incident-free records in 2013.”

“Training already reaches hundreds of first responders through the Safety Train, hands-on sessions at training centers operated by CSX and the Association of American Railroads, classroom training at local fire stations, exercises and table-top drills, and thousands more through web-based and self-study courses,” said Elliot. “In September 2013, nearly 100 crude oil customers were trained by a CSX team. In addition, we continue to deploy special technology to first responders and security officials so that they can track oil and other hazardous materials shipments in virtually real time. The technology is called SecureNOW, and it is now used by 19 of the 23 states in which CSX operates. The technology provides law enforcement and other federal and state public safety officials with access to data on the location of CSX trains and their contents. Through first responders and law enforcement, communities can also receive detailed reports from CSX that document the volume and specific types of hazardous materials that pass through their locations.”

“The development of shale oil represents a tremendous opportunity for our nation to move closer to energy independence, to grow our economy, and to create jobs,” Elliott added. “Freight rail, with its terrific fuel efficiency and ability to reduce highway congestion and maintenance requirements, has a critical role in this opportunity. But it also comes with great responsibility.”