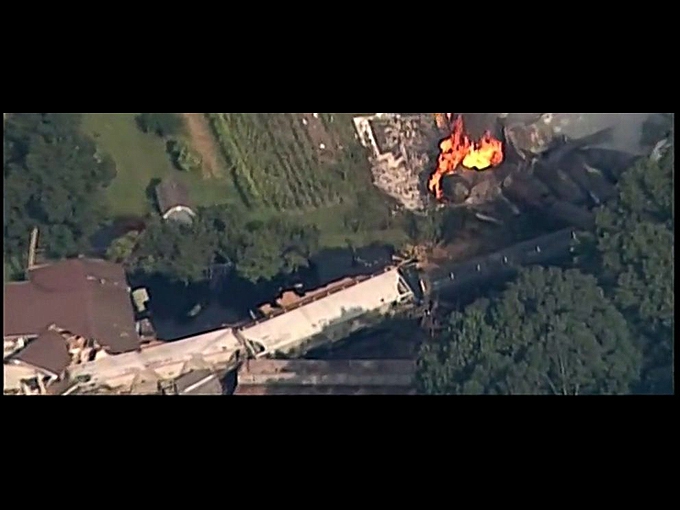 Thirty-two cars of a 178-car, 18,000-plus-ton CSX freight train carrying hazardous materials derailed early Wednesday, Aug. 2, in the small town of Hyndman (Bedford County), Pa., setting railcars and a garage on fire and prompting emergency officials to evacuate hundreds of nearby residents. No injuries were reported.

The train was operating from Chicago to Selkirk, N.Y. The derailment occurred at approximately 5:00 a.m. Hyndman is located about 100 miles southeast of Pittsburgh. CSX spokesperson Rob Doolittle said at least one car containing liquefied petroleum gas and one containing molten sulfur leaked and caught fire.

Bedford County 911 coordinator Harry Corley said officials ordered everyone within a one-mile radius of the derailment to evacuate. That encompasses all of of Hyndman.

The NTSB (National Transportation Safety Board) has dispatched investigators to the scene. The cause of the derailment—a runaway, improper train handling (brake, throttle, or slack action), or mechanical defect—is unknown at this time.

Five locomotives were at the head of the consist. Unconfirmed reports say three of the five units were “dead-in-consist,” meaning that, if true, only two units were bringing the 18,000-ton train down a mountain grade that has a maximum grade of 1.94% near Manila, Pa., which is just east of the summit and Sand Patch Tunnel. Grades fluctuate between 1% and 1.5% until reaching Hyndman. The possibility of operating such a long and heavy train on a descending grade with no more than two powered locomotives is likely to be a factor in NTSB’s investigation, as are also-unconfirmed reports that there were a large number of empty cars at or near the head end.

“CSX continued to work overnight to safely progress the recovery from the Aug. 2 derailment in Hyndman, Pa.   As of 8 a.m. Friday, Aug. 4, the propane fire that had been burning at the site was extinguished. Small sulfur fires continue to burn. Access to those fires is limited by the presence of other derailed cars, so moving those cars safely to gain access to the sulfur fires is the next priority for the effort.   Due to the continued presence of active fires, the evacuation order for Hyndman residents remains in effect.

“CSX continues to work as quickly as safety allows to make the area safe for residents to return to their homes; no precise timeline has been established for when residents may be allowed to reenter their homes.

“CSX also has begun removing derailed cars at the site that are not involved or exposed to the fires. Overnight, a total of 17 railcars were either re-railed and prepared to be removed from the site, or cleared from the site and repositioned to safe locations for removal later.

“For those residents who are staying at designated evacuation hotels, CSX representatives are on site in those hotel lobbies and are available to answer questions and provide assistance.  To support displaced residents’ needs, the CSX community outreach centers in Hyndman and Bedford will remain open today, Friday, until 8 p.m.

“CSX continues to answer questions through the toll-free incident response line: 1-800-331-4031. Those efforts will continue until all residents have been returned to their homes.   CSX has created a webpage, response.csx.com, where the public can find information about the community outreach centers, the latest status of the recovery and additional helpful resources.

“CSX appreciates the support of the American Red Cross, local first responders, the Pennsylvania Emergency Management Agency and the community in caring for the needs of residents displaced by this incident.”