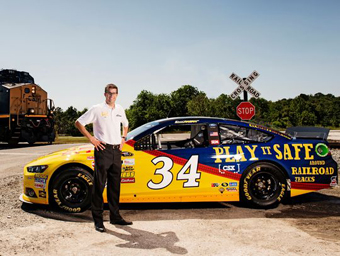 David Ragan, driving the no. 34 CSX “Play It Safe” Ford Fusion, lined up 20th for the April 27th NASCAR Sprint Cup Series Toyota Owners 400 at Richmond International Raceway night race, the hood of his racecar freshly covered in signatures of fans who promised to be safe around railroad tracks—the main message of the Front Row Motorsports team’s partnership with CSX.

In CSX’s debut as a prime sponsor on a NASCAR Sprint Cup car, Ragan delivered a solid performance, finishing in 20th position.

Ragan initially slipped back several positions, telling crew chief Jay Guy that his No. 34 Ford was loose (oversteering) entering the turns but that it had good handling exiting. The team worked to improve the handling of the car over the first half of the 400-lap race, making chassis and air pressure adjustments over multiple pit stops.

After falling as far back as 31st, Ragan began climbing the leaderboard in the second half, thanks to a better-handling car, aggressive pit strategy, and some fast work by his pit crew, which gained him several positions over the course of the race. He climbed as high as 6th for a Lap 333 restart before giving up his top-10 position to pit for fresh tires on another caution a few laps later.

Ragan had his CSX Ford in 20th with just five scheduled laps to go, looking to score his first top-20 finish of the season. But he would need to battle for that finish for more than just five additional laps, with the caution flag flying on Lap 395, forcing a green-white-checkered finish.

The green flag waved for the final time on Lap 404 with Ragan in 21st. He pushed his way up one more spot to cross the line in 20th on the lead lap—his best finish of the 2013 season.

“We had a solid day,” said the 27-year-old driver, an enthusiastic spokesman for CSX’s “Play It Safe Around Railroad Tracks” public safety campaign. “We started 20th and finished 20th. You would look at that and think it was a slow day. Actually at times we had a top-12, top-14 car, but when we were off-sequence on the leaders, we were around 25th and 30th. But we did a good job on pit road and we never gave up. We worked hard all night, and maybe left a few spots on the table, but all in all it was a good night for us.”

The decal that adorned the hood of the no. 34—the racecar and its bold graphics distinctive and highly visible on the three-quarter-mile track, under the lights, in CSX’s bright blue and gold locomotive colors—was filled with the signatures of dozens of fans and NASCAR personalities. Among those who took the time to place their signatures: drivers Sam Hornish Jr. and Juan Montoya, and NASCAR icons Bobby Allison (pictured) 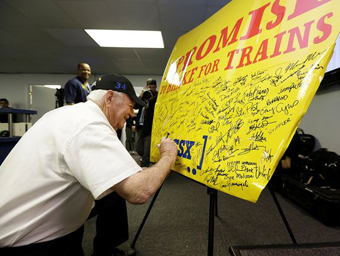 and Richard Petty. In a press conference earlier in the day, Allison joined Ragan, CSX Director of Community Affairs and Safety Terry Ludban, and Virginia State Senator Bryce Reeves to talk about public safety at railroad crossings and around railroad tracks. Ludban, a former locomotive engineer, said the sponsorship gave the railroad “a vehicle to get our message out to literally millions of people that we don’t have access to.”

An enthusiastic group of young adults from the Future Farmers of America (which CSX, a major mover of agricultural products, works with as part of its community affairs efforts) handed out “I BRAKE FOR TRAINS” bumper stickers to fans exiting the track after the race. The bumper sticker is a replica of the decal that’s affixed to the rear bumper of the no. 34 all year long.

“The entire race weekend lived up to our expectations, and more,” CSX Corporate Communications Director Gary Sease told Railway Age. “Our public safety message reached a lot of people, and the car was a hit with the fans. We thought it was the best-looking car on the track! We’re also very pleased that David Ragan and the Front Row Motorsports team brought home a top-20 finish in our debut as a prime sponsor.”