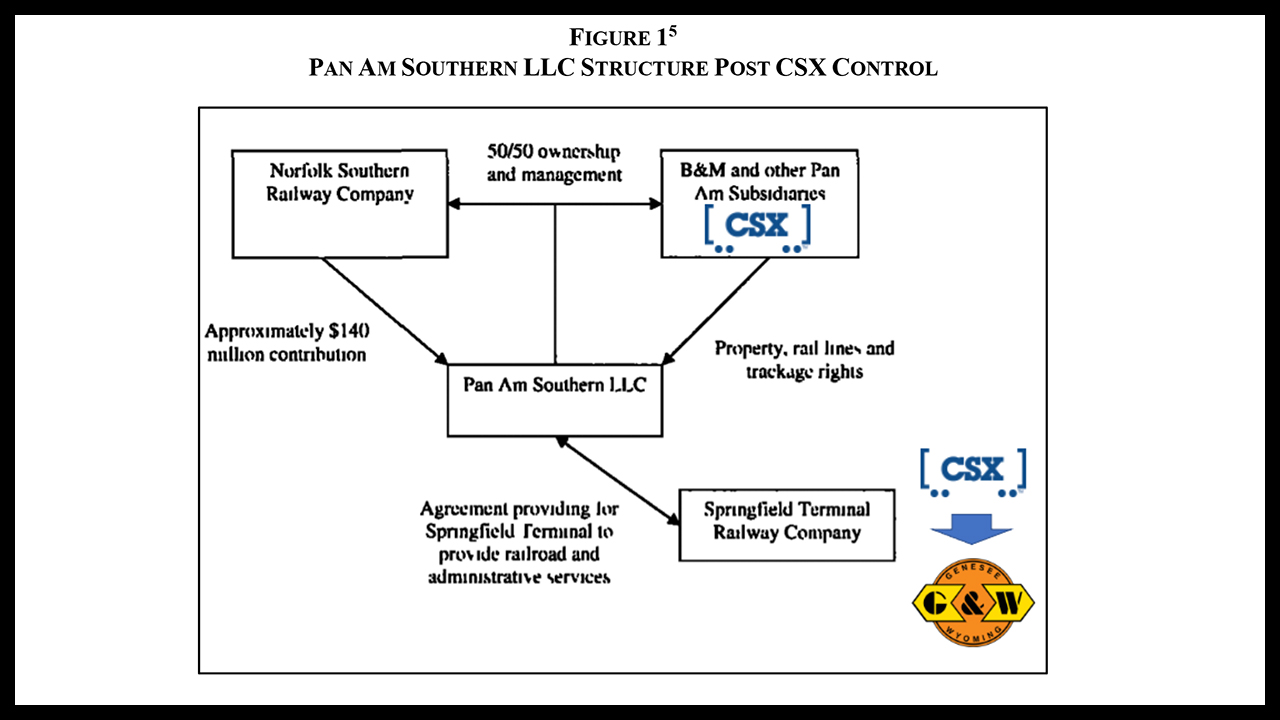 Canadian Pacific: “CSX appears to acknowledge that without remedies these changes would pose serious and immediate threats to competition, and it attempts to remedy them via the complex agreements with NS and Genesee & Wyoming that are presented to the Board for approval or exemption in the Related Transactions.”

CSX, in a media release, pointed to several letters of support ranging from Maine’s U.S. Senators to passenger rail advocates and agencies. Canadian Pacific called for the STB to impose conditions. Amtrak reiterated its opposition. And, perhaps curiously, the U.S. Department of Transportation, on behalf of the Federal Railroad Administration, filed comments that took no position either way, but instead chose to “highlight some of the issues that are of particular interest to the USDOT, which we urge the Board to consider carefully in the course of its review of the proposal.”

On the support side, several additional letters of support were recently filed with the STB, bringing the total to more than 100 pro-merger comments, CSX reported on Aug. 30.

U.S. Senator Angus King (I-Me.) recently offered his support for the merger, saying that CSX’s “agreements to continue the support of passenger rail service” in addition to “looking forward to investment benefits this acquisition may bring to Maine.” King’s Maine Republican colleague, Susan Collins, had previously weighed in, “hailing the benefits to passenger rail service in her state, and saying the merger ‘has the potential to bring significant benefits to Maine,’ and that ‘many Maine businesses rely on rail traffic to deliver raw materials and transport products,’” CSX noted.

The Connecticut Department of Transportation (CTDOT) “cited how CSX planned investments to the Pan Am infrastructure will benefit the state, freight shippers, and passenger rail,” CSX said. “Richard Andreski, CTDOT public transportation chief, wrote that CSX ‘has shown a commitment to safety and has indicated to CTDOT that it will invest in and modernize the Pan Am infrastructure, which will make the New England rail network more efficient and safer for freight and passenger operations. Safety is a top priority for CTDOT, and we look forward to these improvements.’”

The Northern New England Passenger Rail Association (NNEPRA), which, after coming to a resolution on a few issues related to station locations and maintenance concerns, according to CSX, also submitted a letter of support. NNEPRA Executive Director Patricia Quinn wrote, “This transaction, and the physical and operational improvements CSX has indicated it will make, has the potential not only to sustain and enhance the safe operation of passenger and freight rail service in Maine and New Hampshire, but also to preserve and protect the substantial financial investments which have enabled NNEPRA and its partners to achieve success to date and set the stage for even greater economic opportunities and public benefits in the future.”

“NNEPRA’s support for the transaction is significant given NNEPRA’s role as the primary state sponsor of Amtrak’s Downeaster passenger rail service between Brunswick, Maine and Boston, Mass.,” CSX noted.

New Hampshire Department of Transportation Commissioner Victoria F. Sheehan also submitted a supportive letter, saying, “This transaction would be beneficial to New Hampshire because it would provide a continuous, single-line rail service and provide additional resources to improve and market the line with the potential to bring additional freight service to New England markets. The ability to create more opportunity for freight service in New Hampshire would take additional trucks off the road which would be beneficial for both the economy and the environment.”

New Hampshire Republican State Representative John A. Graham said in his letter of support, “Increased use of freight rail means fewer trucks are on the roads, which is beneficial for the state’s highway budget and good for the environment. Additionally, this merger will give greater credence to our efforts to further inter-modal transportation here in New Hampshire and help reduce carbon emissions throughout the region.”

On Friday, July 30, the STB formerly accepted CSX’s revised application for consideration, which was filed earlier last month as part of an agreement to acquire Pan Am Railways. Copies of the aforementioned support letters and additional information on the merger can be found by visiting NEFreightRail.com.

The U.S. Department of Justice on Aug. 26 filed comments that took issue with many aspects of the proposed merger, citing President Biden’s July 9 Executive Order, “Promoting Competition in the American Economy.”

Canadian Pacific on Aug. 27 filed comments by attorneys David L. Meyer and Jeffrey J. Ellis asking for specific conditions to be imposed on the merger, in particular, the Hoosac Tunnel route on the Pan Am Southern (PAS), the joint venture of Pan Am and Norfolk Sothern. The transaction “raisesmaterial concerns about the long-run preservation of competitive rail access to New England from the West,” CP’s attorneys said, adding that the STB “should impose narrowly tailored conditions designed to ensure that the PAS Hoosac Tunnel route remains an operationally and commercially viable competitive route.”

CP’s letter, which can be downloaded below, contains, as an exhibit, a detailed report on the Commonwealth of Massachusetts Patriot Corridor Double-Stack Clearance Initiative Project:

Amtrak—currently involved in contentious proceedings with CSX and Norfolk Southern over proposed Gulf Coast service linking New Orleans with Mobile, Ala.—filed comments (downloadable below) “making clear our continued opposition to the acquisition of Pan Am Railways by CSXT. It also details significant public investment—more than $200m—in the property that needs to be protected. Also, CSXT assertions about deployment of Positive Train Control on the Downeaster route were planned and funded through Amtrak prior to this proposed acquisition. The filing references the Executive Order issued by the Biden-Harris Administration regarding protecting passenger service in merger considerations.” Excerpts:

“The Association of American Railroads states on its website that ‘the vast majority of America’s freight railroads own, build, maintain, operate and pay for their infrastructure with little or no government assistance.’ That is most definitely not the case on the Pan Am lines that CSXT seeks to acquire. Since the late 1990s, there has been an enormous investment of public money in the just over 1,000 miles of rail lines owned and/or operated by Pan Am.  The majority of this funding was provided to support initiation or improvement of state-supported Amtrak services. … The public interest requires imposing conditions so these investments are not squandered, protecting the investments’ use for their intended purpose, rather than solely for CSXT’s gain.”

“While rail consolidations have been good for freight railroads and their investors, they have not been good for Amtrak and its passengers. Nor have they benefited the taxpayers who have been forced to cover the increased operating expenses and lost passenger revenues attributable to consolidation-caused delays on state-supported corridor and federally funded long-distance routes, or the infrastructure maintenance costs that consolidations have shifted from profitable freight railroads to the public purse.”

“In this instance, the Proposed Transaction will concentrate all control over all the primary rail routes in the region into the hands of one entity, and that entity has historically frustrated the passenger rail policies, and Amtrak’s statutory rights embodied in §24308. The Proposed Transaction is therefore not in the public interest, unless conditions are imposed that will ensure that passenger rail interests are not jeopardized by the concentration of control in CSXT.”

“Based on Amtrak’s experience with CSXT, Amtrak rightfully has grave concerns about CSXT being granted greater power in the region to block Amtrak’s right to meaningful access to build upon the significant growth of intercity passenger rail in New England, contrary to the policy expressed in the Executive Order and the statutory requirements of 49 U.S.C. § 24308.”

In a letter described as “opening comments,” the USDOT said it “does not take a final position on the merits of the proposal, or whether the Board should approve the Revised Application. Instead, we offer this opening comment to highlight some of the issues that are of particular interest to DOT, which we urge the Board to consider carefully in the course of its review of the proposal. The Department looks forward to reviewing the submissions of other parties and may provide additional views to the Board at a later stage of the proceeding.”

A few highlights of the letter, which can be downloaded below:

Safety: “The Board directed the applicants to submit their Safety Integration Plan (SIP) by Aug.30, 2021 for review and approval by the Board and FRA. The SIP process, governed by 49 C.F.R. Part 1106, requires the applicants to establish clear, detailed procedures to ensure that their operations will be safely integrated in the event that the Board approves the proposed transaction. Compliance with an approved SIP is treated as a condition of the Board’s approval, and FRA retains the authority to oversee SIP implementation and to advise the Board of whether SIP requirements are met.”

Competition: President Biden’s July 9 Executive Order, Promoting Competition in the American Economy, “reaffirms the importance of robust competition to the nation’s economy, and states that the Biden Administration will enforce governing law rigorously to combat excessive industry consolidation. The President called upon the Board in particular, asking it to ensure that it reviews industry proposals carefully in view of competitive consequences, the effects upon shippers, and other public interest considerations. The EO recognizes that many railroad mergers and consolidations may have benefits for stakeholders and for the Nation’s economy; the critical point is to ensure that regulators give close scrutiny to such proposals, and that the proponents are charged with putting forth a robust record to demonstrate the competitive benefits and harms, consistent with governing law.”

Passenger Rail. “The proposed transaction has important implications for passenger rail in the Northeast. The region affected by the transaction is home to a thriving network of Amtrak and commuter rail lines, which are interdependent with one another and with host freight railroads … In DOT’s view, the Board should closely scrutinize the proposed transaction to determine the impact upon passenger rail service, and should consider imposing conditions upon the applicants to ensure that existing passenger service is appropriately maintained. The applicants should also keep open channels of communication with regulators and other stakeholders to facilitate growth, improvements, and investment in passenger rail service. Such measures are not only consistent with the statutory preference afforded to passenger rail service … but also, with the goals set forth in [his EO], President Biden encouraged the Board to review freight rail competition issues, including mergers and acquisitions, with a special sensitivity toward passenger rail concerns, and to alleviate passenger service disruptions … The restoration, enhancement, expansion, and on-time performance of passenger rail service is a key priority for DOT and for the Biden Administration, and should also be an important component of the Board’s review of the public interest in this transaction.”