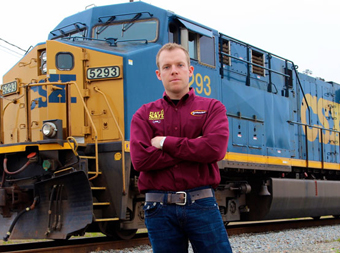 Monday night’s rain-delayed Daytona 500, the season-opening event in the NASCAR Sprint Cup Series, marked a milestone for CSX Transportation, the first Class I railroad to sponsor a Sprint Cup team.

CSX is an associate sponsor of the no. 78 Furniture Row Racing Chevrolet Impala driven by rising NASCAR star Regan Smith. CSX’s sponsorship is tied directly to its Play it Safe public safety campaign, which is designed to help prevent grade crossing incidents and trespassing fatalities.

Smith’s car sports a bright orange rear bumper sticker that says “I BRAKE FOR TRAINS.” This message is supported on the race team’s railroad-themed pit box, which features large “WE BRAKE FOR TRAINS” signage and a pit stop flag featuring a highway-rail grade crossing sign on a red-and-white striped pole. Smith has become an enthusiastic and articulate spokesperson for CSX, talking up grade crossing safety whenever he has the opportunity.

Smith’s No. 78 Furniture Row/CSX Play it Safe Chevrolet, which showed its power by running up front during different periods of the scheduled 200-lap race, got collected in a multicar wreck on Lap 188. Though Smith’s car suffered major front-end damage in the seven-car melee, he was able to bring the crippled machine home to a 24th-place finish at Daytona International Speedway.

The battered racecar forced Smith to make three unscheduled pit stops for temporary repairs, including the removal of the car’s hood on the final stop. “We just didn’t take advantage of our great racecar tonight,” Smith said. “At the beginning of the race we ran up front and I could put the Furniture Row/CSX Play it Safe Chevy anywhere I wanted. It was that good.” 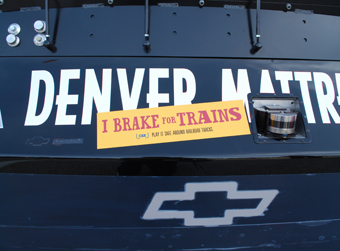 Smith, who started the Great American Race sixth, ran in the top-five with ease and led laps until a slow pit stop on Lap 58 sent him to the rear of the field. “That pit stop took away our momentum and it was a battle to get back up front,” Smith explained. Smith managed to get close to the lead cars as the race was winding down, but then found himself in a vulnerable position on the 2.5-mile oval. He got shuffled out of the draft to 19th place with 17 laps remaining. ”When you’re in the middle of the pack at the closing stages of a restrictor-plate race, you’re asking for trouble,” noted Smith. “We were in the danger zone and sure enough we got caught up in someone else’s mess. I knew we were in a bad position. But I felt if we could sneak through and avoid the wrecks we would have the potential of at least a top-10 finish. It was a bizarre ending to Speedweeks and the only good news from my standpoint is that the 2012 Daytona 500 is finally in the history books.”

It was indeed a bizarre ending. Not only was it the first Daytona 500 in 54 years that was postponed one day, but the race also saw a most unusual happening. A jet dryer cleaning the track during a caution erupted into flames after being run into by Juan Pablo Montoya’s racecar during a caution at lap 159. Hundreds of gallons of jet fuel spilled onto the track surface and ignited, forcing NASCAR to bring out the red flag for more than two hours so safety crews could clean and dry the spillage. (Montoya and the jet dryer’s driver, Duane Barnes, escaped unharmed.)

“I have never seen anything like that in my career and I am willing to bet that no one else has either,” stated Smith about the jet dryer explosion. “It was spectacular, no question about that. The lengthy red flag knocked the wind out of our sails, but recently you’ve come to expect the unexpected at the Daytona 500.”

Smith added as he was leaving the track for the team’s home base in Denver, Colo., “It’s been a long Speedweeks and we need to recharge our batteries and get focused for this weekend’s Cup race in Phoenix. So much effort is put into the Daytona 500, but you have to keep in mind that it pays the same amount of points as the other 35 Sprint Cup races.”