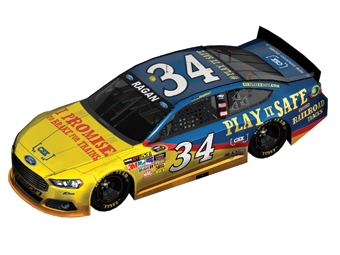 NASCAR Sprint Cup fans attending the Toyota Owner’s 400 on Saturday evening, April 27, at Richmond International Raceway, or tuning in to the race on Fox Sports, will see something unusual on the three-quarter-mile track: A racecar sporting Class I railroad graphics.

Front Row Motorsports driver David Ragan’s No. 34 Ford Fusion, adorned in CSX’s blue and gold locomotive colors, will be carrying the railroad’s public safety message. As the primary sponsor for the Richmond race, CSX will be using the entire racecar to promote safety. Both rear quarter panels and the hood will display CSX’s “Play it Safe” campaign tagline and other messages. The No. 34 Ford will also feature the “I BRAKE FOR TRAINS” bumper sticker. As well, Ragan is utilizing social media and is encouraging his fans to help promote the message with the #PlayItSafe hashtag as it will be seen on his car.

There’s another unique element to the No. 34’s Richmond graphics package. Like every driver in the NASCAR Sprint Cup Series, David Ragan is used to signing autographs for fans. But during the race weekend at Richmond, he will be collecting signatures on the hood of his racecar as a pledge to exercise safety around railways, as part of the CSX “Play it Safe” campaign. That will take place on Friday, April 26, when NASCAR fans will have the opportunity to sign the pledge that will make their signature part of the car that will race in the April 27 event.

This is the first time that a Class I railroad is a primary sponsor on a NASCAR Sprint Cup car.

Ragan, who partnered with the U.S. Department of Transportation last year to educate drivers of the dangers of distracted driving, welcomes the opportunity to be part of another safety message.

“Distracted driving is unfortunately very widespread, and it’s impossible to bring too much attention to this issue, but exercising that same caution around railroad tracks and crossings as drivers and pedestrians is something too many people don’t even think of,” says Ragan. “It can take a train up to a mile to stop, and every three hours, a person or vehicle is hit by a train.”

“We’re proud to partner with the team that has been most associated with driver safety,” says CSX Corporate Communications Director Gary Sease. “David is a great spokesperson, and we hope his passion for this issue will translate into helping us make the roads and our rails safer. The most likely person to be involved in a train-car or train-pedestrian collision is a male 18 to 34 years old, so NASCAR provides the perfect audience to get out this important message. If we save just one life, it’s worth it.”

David Ragan’s activities with CSX for the Richmond race began several days in advance. On April 23, he took a break from the 850-hp No. 34 Ford to get behind the controls of a 4,400-hp CSX locomotive at Moncrief Rail Yard, Jacksonville. There he learned more about railroad operations and promoted the “Play it Safe” campaign.

In other events during the day, Ragan put the CSX primary racecar on display at CSX headquarters in Jacksonville, and signed autographs for CSX employees.

“We gave David a tour of one of our newest locomotives and showed him how it operates. His tour included the perspective from the engineer’s seat, and a briefing on how CSX—the largest railroad in the East—delivers freight safely and reliably,” said Gary Sease.