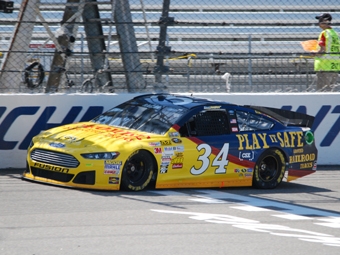 Front Row Motorsports and CSX will partner for a third straight season in 2015, returning the railroad’s “Play It Safe” public service message to David Ragan’s No. 34 Ford Fusion in NASCAR’s Sprint Cup Series in eight races.

The CSX “Play It Safe” paint scheme, in the railroad’s distinctive blue and gold locomotive colors, will make its first appearance of the 2015 season on March 1 at Ragan’s home track, Atlanta (Ga.) Motor Speedway. The 500-mile Folds of Honor QuikTrip 500 will air nationally on FOX. Among the other races at which CSX is the 34’s prime sponsor are the Food City 500 (Bristol Motor Speedway, April 19), the Coke Zero 400 Powered by Coca-Cola 400 (Daytona International Speedway, July 5), the historic Brickyard 400 (Indianapolis Motor Speedway, July 26), and the AAA 400(Dover International Speedway, Oct. 4).

CSX will once again use Ragan’s ability to connect with fans to promote the message to “Play It Safe” around railroad tracks by braking for trains at railroad crossings and staying off railroad tracks. In addition, Ragan will visit several CSX facilities to talk about how safety is stressed in the risky world of automobile racing. “Two years into the partnership, CSX and Ragan continue to spread cautious words of advice to NASCAR’s fan base, especially the millennial generation of 18- to 34-year-old males, the demographic mostly likely to be involved in a crossing collision and to trespass on tracks,” said CSX Global Director, Brand & Digital Media John Claybrooks. “If we save just one life, this program is well worth it. There are a lot of parallels surrounding the importance of safety on the race track and around railroad tracks. The No. 34 Ford is a great partner communicating this message thoughtfully and creatively.”

“I’ve really enjoyed working with all the great people at CSX,” Ragan said. “I’ve gotten to visit some rail yards and meet the professionals who keep the trains moving and do it with safety as their top priority. We’re excited to keep spreading the message about playing it safe around trains and railroad tracks with our No. 34 CSX Ford program.”

Front Row Motorsports team owner Bob Jenkins says he’s proud of how his team is the right fit for CSX’s needs. “It will be great to have David and CSX teamed up once again in 2015,” Jenkins said. “They’ve done a lot of great work together, not just at the track, but in schools and rail yards talking with kids and CSX employees. We’re really proud of the platform that we’ve been able to offer to get their message out. It’s a great partner-success story for our team.”