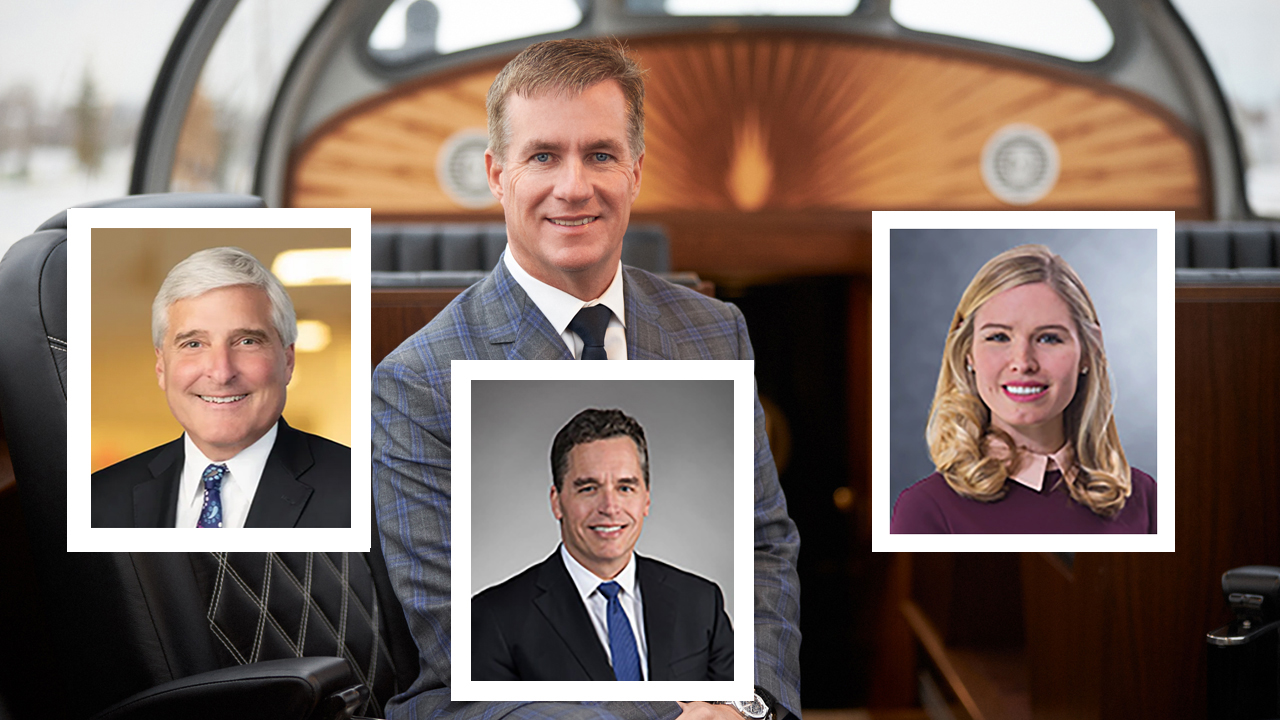 Canadian Pacific on April 30 filed a formal objection with the Surface Transportation Board stating that CN “does not qualify for a waiver of the STB’s rules for major transactions, with respect to CN’s unsolicited proposal for Kansas City Southern.”

CP contends that a CN/KCS transaction “does not satisfy any of the criteria that the STB relied upon in finding that the waiver should apply to a CP/KCS transaction, which the STB granted to CP on April 23, 2021.” CP’s filing, by attorneys David L. Meyers, Sophia A. Vandergrift of Sullivan & Cromwell LLP and Canadian Pacific Chief Legal Officer and Corporate Secretary Jeffrey J. Ellis, is based upon six “reasons why a waiver should be rejected for CN’s proposal”:

“1. CN is a much larger railroad than CP: A combined CN/KCS would greatly expand the size of the fifth-largest U.S. Class I railroad, vastly increasing the gap between CN/KCS and the new smallest Class I, which would be CP. A combined CN/KCS would be more than three times the size of CP, whereas the proposed CP/KCS would still be 13% smaller than CN, as measured by U.S. operating revenue.”

“2. A potential CN/KCS combination heavily overlaps across much of KCS’ U.S. system, unlike a CP/KCS combination: A CN/KCS transaction plainly flunks the ‘end-to-end’ test, notwithstanding CN’s occasional and misleading assertions that such a transaction would be end-to-end. As explained in CP’s April 27, 2021 letter filed with the STB, economic analysis of Waybill Sample data identifies a significant number of origin-destination corridors where the number of independent rail competitors will be reduced from 2-to-1 or 3-to-2 by the CN/KCS transaction. The verified statement of economist Dr. W. Robert Majure (see below) was filed with CP’s submission and explains the screening analysis that confirmed these impacts and also confirmed that CP/KCS is in fact end-to-end.”

“3. The potential downstream impacts of a CN transaction are material: Whereas CP/KCS preserves the basic six-carrier structure of the North American rail network (two in the East, two in the West, and two in Canada with routes to the Gulf), the CN/KCS transaction would destabilize that structure. To borrow CN’s own words, unlike CP/KCS, the CN/KCS transaction would be a “significant restructuring of the rail industry,” and the Board needs the new rules to address the “likely strategic responses.”

“4. CN’s acquisition premium should cause the STB concern. The extraordinary premium price CN is offering to try to disrupt CP’s proposed combination with KCS ought to concern the STB, as it will not only extinguish the new competition that a CP/KCS combination would bring to CN but also require CN to find ways to recoup those extra costs. All of these consequences would arise immediately upon KCS being placed into trust as part of a CN acquisition, and the ‘public interest’ standard of the Board’s 2001 rules should be applied.”

“5. CN’s proposal to acquire KCS would kill the CP/KCS combination and all the procompetitive effects that go with it: The STB stated in its April 23, 2021 filing that it was applying the pre-2001 rules to the proposed CP/KCS transaction because that transaction ‘fall[s] neatly into the Board’s rationale for adopting the waiver in the first instance.’ The decision emphasized the ‘CP and KCS networks would appear to result in the fewest overlapping routes when compared to a merger between KCS and any other Class 1 carrier.’ Unlike the ‘end-to-end’ CP/KCS transaction—after which the combined company would still be the smallest Class I railroad—the CN/KCS proposal raises all of the concerns that the 2001 rules were adopted to address.”

“6. CN has already committed itself to the new merger rules. Despite CN stating that its merger application would proceed under the current (2001) rules for major mergers, CN has also implied that its embrace of the 2001 rules was only ‘voluntar[y],’ perhaps suggesting that the STB would lack authority to bind CN to compliance with those rules. That is another reason to make it official that the waiver does not apply and the new rules will govern.”

CP sent out customer bulletin on May 1 that explains Dr. W. Robert Majure’s verified statement filed with STB on April 30. It is reproduced here:

At CP we encourage competition. Our goal entering merger discussions with KCS was to provide more choices for customers, and knowing our superior service we are confident shippers will choose CPKC.

We believe so strongly in this merger that we sought expert opinion from W. Robert Majure, Ph.D., Vice President at Cornerstone Research, to analyze the options and provide insight into what makes sense from a customer perspective. Dr. Majure holds a Ph.D. in Economics from Massachusetts Institute of Technology and worked for approximately 25 years in the Antitrust Division of the U.S. Department of Justice (“DOJ”) most recently as its Director of Economics. It is clear after reading the preliminary findings that CPKC is the best proposal and provides more choice and more competition.

Dr. Majure has examined competition issues related to the proposed acquisition of Kansas City Southern (“KCS”) by CP. In light of the competing proposal to acquire KCS by Canadian National (“CN”), the following statements describe his preliminary findings and how these compare to competitive issues that would be raised in an acquisition of Kansas City Southern by Canadian National. A copy of CP’s filing is available here.

“Fundamentally, railroad mergers generally fall into one of two categories: (i) end-to-end or (ii) horizontal. End-to-end mergers combine two systems that each serve a distinct geographic area. End-to-end railroad mergers have typically been recognized as posing lower risks of competitive concerns and a higher likelihood of improving overall quality and competition as single-line service is extended between the two distinct areas. In contrast, horizontal mergers involve two railroads that serve the same corridors and geographic areas. Horizontal railroad mergers are more likely to reduce the competitive options of shippers either within a corridor or between corridors, and thus pose greater risks of significant competitive concerns.

“This categorization is supported by my preliminary analysis in which I use the Confidential Waybill Sample to perform the standard preliminary step in analyzing a railroad merger. Specifically, for each proposed transaction, I have identified corridors where the acquisition would reduce the number of independent routes between specific areas (i.e., specific origins and destinations) based on movements that are observed to occur within the data. This screening exercise has the benefit of using data on actual movements to identify routes – including interchanges between separate railroads – that are practical for shippers. By screening for reductions in the number of independent routes, it also identifies reductions in choices that are particularly important to shippers. From a competition perspective, reductions in the routes that can potentially be used to bargain against a specific railroad need to be independent of that railroad. This is because it is hard to successfully bargain for better rates with a threat to switch to another route if that route also depends on getting a rate from the same railroad.

“Consistent with that focus on identifying the lost choices that are most important to shippers, a common practice in railroad merger reviews is to focus on situations where a proposed acquisition reduces the number of independent routes from 3-to-2 or from 2-to-1. In the former (a 3-to-2 reduction), a shipper still has some potential for competition but significantly less than before. In the latter (a 2-to-1 reduction), the loss of competition is even worse. A shipper that previously had some potential for competition no longer has any competition — i.e., the shipper would essentially face a monopoly on rail transport post-merger.

“To implement this standard screen for horizontal competitive issues in a railroad merger, I use the 2019 Confidential Waybill Sample. For origin and destination areas, I use the Bureau of Economic Analysis (“BEA”) Economic Areas within the United States, provinces within Canada, and a combined area for Mexico.

“As I continue to perform my analysis, I expect to incorporate the fact that shippers of specific commodities have more or less ability to avail themselves of competitive options that are nearby even if a railroad does not have direct access to a specific facility. For this preliminary assessment, and to illustrate at an overall level the corridors that warrant further investigation in either of the proposed acquisitions, I treat any movement of a commodity between the defined areas as informative about the possibility of shippers having competitive options or not. Likewise, I treat a terminating or originating railroad carrying less than 50 miles as not determinative of whether a route is independent.

“My examination of the data confirms that a CP-KCS transaction would be an end-to-end merger. Notably, my initial analysis does not suggest risk of reduced horizontal competition resulting from an acquisition of KCS by CP.

“In contrast, there are significant traditional indicia of horizontal competition concerns raised by a potential CN-KCS transaction. For an acquisition by CN, the screening exercise identifies a reduction in independent options in many corridors. This is not surprising given that CN and KCS have broadly parallel routes. In particular, 31 different corridors screen as 3-to-2 reductions and another 31 corridors screen as 2-to-1 reductions. Eight corridors screen as having higher order reductions in the number of independent routes (e.g., reductions from 6-to-5 or from 4-to-3). Consistent with the standard focus on the reductions most likely to generate significant effects for shippers, for the purposes of this analysis I ignore the eight corridors with higher-order reductions. Rather, I focus my analysis on the 62 corridors with a reduction of either 3-to-2 or 2-to-1. (Bold emphasis CP.)

“Exhibit 1 illustrates how these horizontal overlaps would affect shippers throughout the systems of CN and KCS. This map details the areas which are part of a corridor that the screening exercise identified as a 3-to-2 or a 2-to-1 reduction — e.g., where customers would lose independent rail choice post-merger. Each area is shaded to reflect the total amount of railroad revenues in such corridors for that area. Total revenues for shipments on these corridors in 2019 was approximately $730 million. As I noted above, in this analysis I combine all commodities shipped in a corridor. I recognize that doing so to measure the overall effect could combine commodities of very different values. By measuring total revenues, I normalize for these differences in values across commodities within a corridor. I have overlaid on this map the tracks and trackage rights of KCS and CN.

“Exhibit 1 demonstrates several clear points, including the following. First, there are many areas (with significant associated rail revenues) that would experience reduction in independent competition following a potential CN-KCS merger. Second, these areas of potential concern are found all along the CN and KCS networks, and are particularly concentrated where the networks overlap. Third, the effects are not just local to the southern United States. The potential CN-KCS merger would affect options for north-south shippers from locations as far as Minnesota, and ever further north into Canada.

“Exhibit 1 demonstrates the issues raised in a broadly horizontal acquisition such as CN’s proposal for KCS that are not present in an end-to-end merger such as CP’s proposed acquisition of KCS. These indicia of significant horizontal problems warrant further investigation. In particular, and among other concerns, CN and KCS’s parallel service to north-south traffic, including traffic from various parts of Canada and Texas, as well as the specific overlaps in areas of Mississippi and Louisiana, combine to generate competitive issues that warrant further investigation on behalf of shippers throughout the system currently served by CN and by KCS. I would anticipate evaluating these issues in greater depth if CN’s proposed transaction is to proceed.”