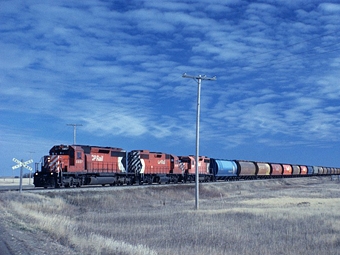 “CP believes that the government has unfortunately chosen to introduce legislation that will do nothing to increase supply chain capacity in the grain handling system, will not move more grain to markets more quickly, and has the potential to cause great damage to the Canadian rail transportation system that is unquestionably the best in the world,” said CP CEO E. Hunter Harrison. “Targeting the railways when our dedicated men and women are working 24/7 to recover from some of the harshest winter operating conditions ever seen is not only ineffective but grossly unfair.”

“Expansion of regulated interswitching could seriously impact Canada’s competitiveness as it effectively transfers traffic that normally would move over Canadian railways and ports, to U.S. railroads and ports, potentially resulting in job losses, reduced investment, and the dampening of the Canadian economy,” Harrison said. “Interswitching will also lead to double handling of grain shipments that will slow down the grain supply chain, negatively impacting transit times.”

“At close to 80 million metric tonnes (MMT), this season’s grain crop is 27% above the previous 2008/2009 record and 37% above the five-year average,” CP pointed out. “While the production increase is dramatic, the scope of the supply chain challenge has been exacerbated by the fact that the increase is almost entirely for export, meaning there is more than 20 MMT additional volume to be moved over and above the 33 to 34 MMT exported in a typical year. This record grain crop is far beyond the overall grain supply chain’s capacity in a single year and as a result will be moved over the remainder of this year and into next.”

“Canada’s grain handling system is just not built to handle this record amount of grain,” said Harrison. “While it is easy to blame the railways for ‘dropping the ball,’ it ignores the facts. Rail is only one element of the supply chain, and this year’s challenges relate to all elements including farm storage, country elevator capacity, rail capacity, terminal capacity, overall port capacity, and winter weather related challenges within the North American rail network.”

CP noted that it continues to move record amounts of grain through some of the harshest operating conditions it has ever seen. “Obviously, this performance is dependent on all of the players in the supply chain performing in a way that maximizes all available capacity including full 24/7 operations, something we are still not seeing in the supply chain on a consistent basis,” said Harrison.

“We are very concerned about the speed and lack of consultation by the government in making such significant changes to the rail transportation system that could result in unintended consequences for all stakeholders,” he added. “We need to move away from reactionary legislative interventions that unfairly target one participant and potentially damage the Canadian economy. Instead we should all focus on commercial solutions to maximize overall capacity in the grain supply chain. This is especially important if these larger crops become the new normal as has been suggested. If this is true, a system grounded in commercial principles, not regulation, is required to address the capacity constraints and the significant investments required, including replacing Canada’s aging grain hopper fleet.”