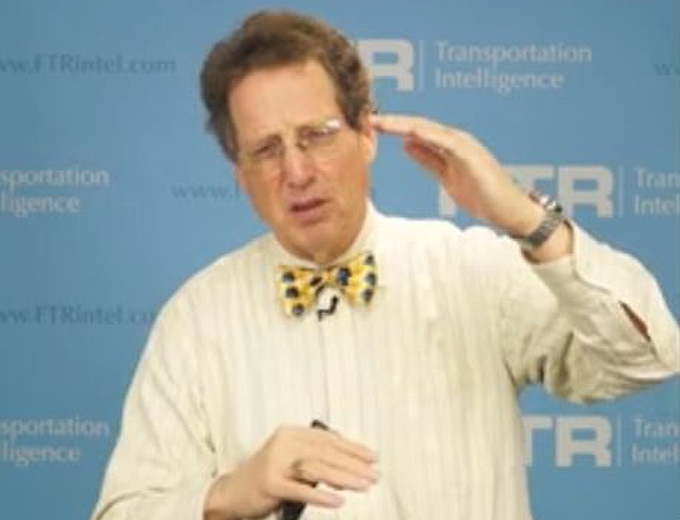 Noted trucking industry veteran and freight economist Noel Perry appears to hold a positive near-to-intermediate term view of freight markets, projecting truckload capacity to exceed full utilization in 2018, according to Cowen and Company Managing Director and Railway Age Wall Street Contributing Editor Jason Seidl. However, he is pessimistic looking out to late 2018 and beyond, noting a probable recession.

Cowen recently hosted Perry for a day of discussions on the state and outlook of the trucking and rail markets. “Perry is projecting continued improvement in TL demand, which, coupled with looming capacity constraints, could lead to contractual price increases of 3%-4% in 2017, including fuel,” Seidl said. “He also projects that TL capacity could exceed full utilization in 2018 (above 1.00), something that has not occurred in the recorded history of the industry. The closest to full utilization capacity has come was in 2004 at a factor just under 1.00.

“Looking out to late 2018 and beyond, however, Perry is much less optimistic. He believes that, based on historical economic cyclicality, a recession is probable by 2019. If the U.S. economy dips into a recession that year, it would have ended an expansionary period matching the longest on record. Perry noted that the year leading to a recession typically sees a decline in the trucking market. However, he highlighted one recovery that had a burst in trucking activity later: the recovery that ended in 2001.

“On the rail front, Perry underscored the fact that pricing held up during an extended period of volume decline, which, in his view, demonstrates that the railroads’ ability to get price is more a function of the regulatory environment. He expects rail pricing to be down ~2.5% in 1H17 and up 4% in 2H17.”

Perry is a Truck & Transportation Expert with FTR.