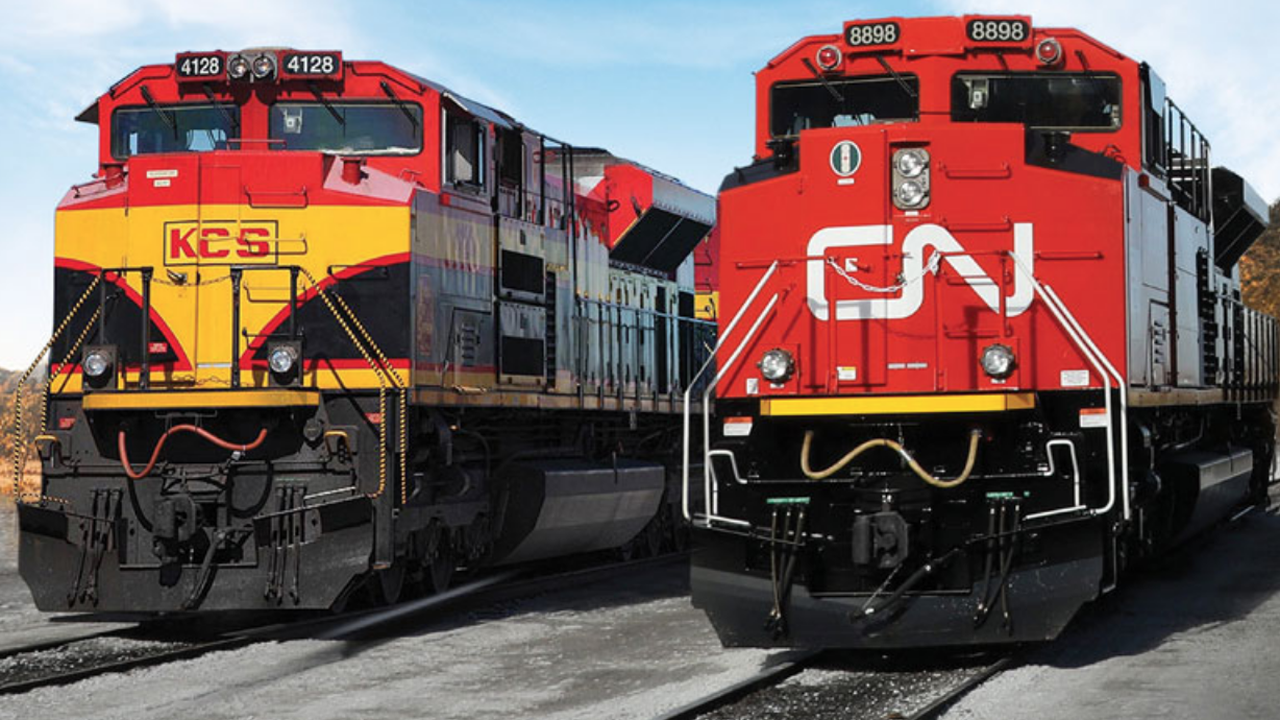 Per the Surface Transportation Board’s (STB) request, proposed merger partners CN and Kansas City Southern (KCS) have filed financial documents that will help STB decide whether or not to approve their voting trust agreement. Canadian Pacific, not surprisingly, responded with heavy artillery fire, with support from rail labor.

CN and KCS submitted to STB on May 26 a renewed motion for voting trust approval, which includes a commitment to divest a 70-mile line overlap in Louisiana.

STB directed them on June 8 to submit further documentation—debt commitment letters plus company disclosure schedules and capital allocation policies, among other documents—by June 14, as part of a “more cautious approach to proposed voting trusts” following the adoption of new major merger rules in 2001. (Download the public version of the newly filed documents below.)

STB explained that “applicants contemplating the use of a voting trust in a major transaction must explain how the trust would insulate them from an unlawful control violation, and why their proposed use of the trust, in the context of their impending control application, would be consistent with the public interest.”

Also on June 8, the agency set a voting trust review schedule: A public comment period runs through June 28, and the deadline for CN and KCS to respond is July 6. A final STB decision could come by mid-July, at the earliest.

Upchurch wrote, in part: “The Board should expeditiously approve the CN voting trust. It is the same as the already approved CP trust. It has the same trustee [former KCS President and CEO Dave Starling]. The Merger Agreement provides KCS with financial flexibility and freedom to undertake its capital and maintenance plans. Further, more than 1,400 stakeholders have supported the CN-KCS combination so far.”

Additionally, Upchurch emphasized the financial strength of KCS and its capital investment plans during the trust period, stating, in part:

• “The Merger Agreement provides KCS with financial flexibility and freedom to undertake its capital and maintenance plans. The Merger Agreement is designed to preserve KCS’s pre-existing capital allocation policies during the trust period. It is also designed to ensure that during the trust period KCS will continue to have the freedom and the resources to pursue its existing and robust capital expenditure program without interference from CN. During the trust period, KCS will have substantial cash, liquidity and access to capital markets not only to meet our planned investment requirements consistent with the plan approved by our Board of Directors previous to any merger agreement with either CP or CN, but also the ability to far exceed that plan if it is necessary to do so.”

Summing up their voting trust in the June 14 filing, CN and KCS said it “has been designed to ensure KCS’s independence and freedom of action during the trust period, and to give CN and KCS the opportunity to demonstrate why they believe that that a CN-KCS combination serves the public interests of enhancing competition; strengthening the North American rail network; and providing better service and more choice to CN and KCS customers.”

“With this filing, CN and KCS are one step closer to creating the premier railway for the 21st century,” they said in a June 15 statement. “CN and KCS look forward to the STB’s review and are confident that their voting trust will be approved.”

In the SMART-TD letter, President Jeremy Ferguson wrote, in part:

“The approval of the CN voting trust by the STB would be risky for the railway industry and quite possibly will negatively impact our involved SMART-TD members. Approval of the CN voting trust proposal would harm employees of both KCS and CN due to the amount of debt CN will carry and the real possibility that the CN transaction would fail the regulatory test in the end.

“The CN/KCS transaction is the opposite of an end-to-end merger and would be anti-competitive due to the overlap of existing rail lines and affected customers. The CN already has a high-capacity main line route from Chicago straight to New Orleans. Therefore with CN acquiring KCS there would be no need for parallel routes such as the KCS line from Kansas City through to New Orleans.

“If the CN voting trust and proposed merger were granted approval, we fully expect significant job losses on either CN or KCS because ultimately the transaction would require either a sale or abandonment of duplicative rail lines. The consequences for SMART-TD members would be uncertain, adverse, and certainly contrary to the public interest.

“By comparison, CP has a route that extends south only as far as Kansas City. This is CP’s only connection with the KCS and we anticipate growth in both rail business and jobs for SMART-TD members. The CN/KCS transaction is just the opposite and would be anticompetitive.”

CP also reported the Transportation Communications Union/IAM (TCU) wrote in a separate letter to STB that “[R]ailroad workers lose with CN’s proposed voting trust. The consequences for TCU’s members and Union Brothers and Sisters will likely be adverse and contrary to the public interest.”

“The next two weeks, leading up to the STB’s June 28 deadline, and the STB’s subsequent deliberations, will determine the course of competition for U.S. railroading and North American commerce for the next 150 years,” CP said.

“Allowing CN to close into trust would not be in the public interest because its approval would pre-judge STB review, harm competition, risk CN shifting financial burdens to shippers and pave the way for additional U.S. rail consolidation. CN’s arguments in favor of a trust amount to the claim that CN and KCS should be able to decide what is in the public interest based on which railroad is offering more money to acquire KCS—that argument elevates private interests over the public interest.

For more on rules in relation to voting trusts, see “CN Voting Trust Clears STB New Merger Rules Tests. It Should Be Approved,” submitted to Railway Age by William Clyburn, Jr., Principal of Clyburn Consulting LLC and the fourth Member to serve on the STB since its inception in 1996. Also, listen to the Rail Group On Air podcast with CN President and CEO JJ Ruest and KCS President and CEO Pat Ottensmeyer, and read “Cowen: ‘More Caution Surrounding Voting Trusts.’”