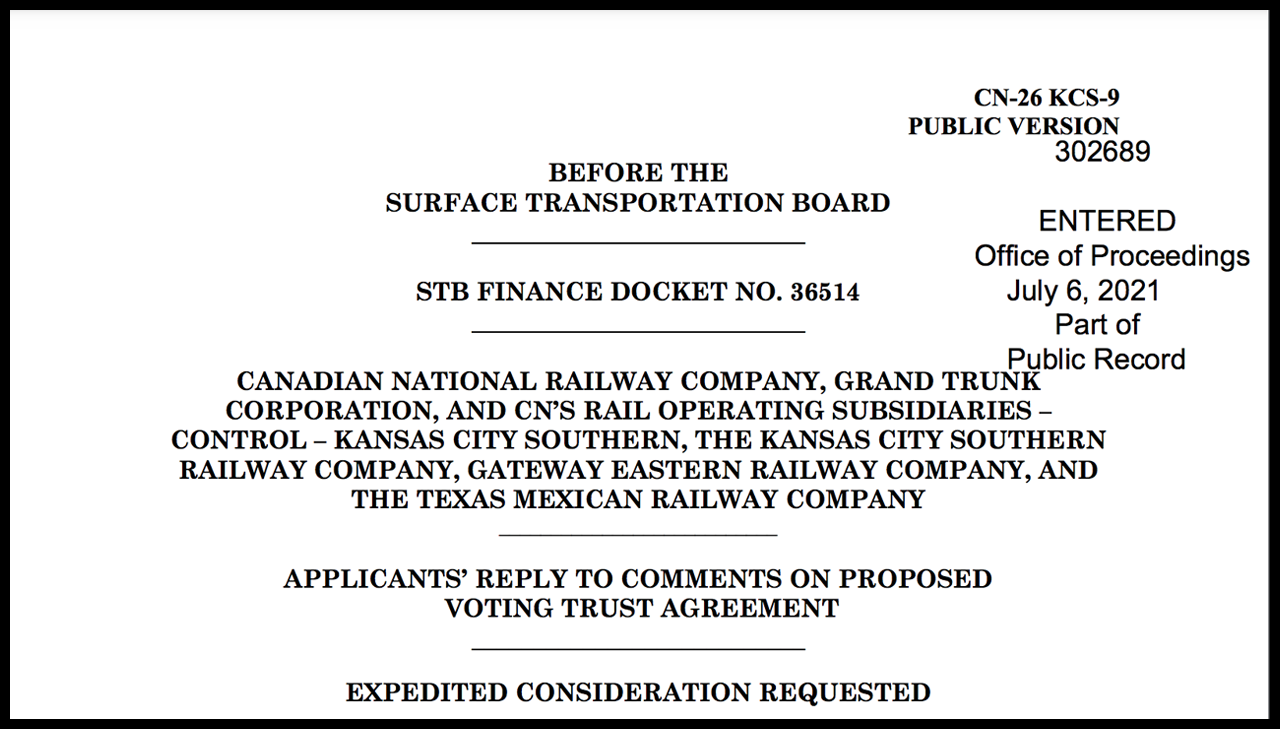 Proposed merger partners CN and Kansas City Southern (KCS) have submitted to the Surface Transportation Board (STB) a reply to comments filed on the railroads’ voting trust agreement. They detailed why the trust should be approved. KCS rival merger partner Canadian Pacific (CP) is unconvinced.

CN and KCS’s July 6 submission (download below) closes the record on the proposed voting trust, which is “a critical step toward full STB review” of their proposed combination, according to both Class I railroads. They noted in their July 7 filing announcement that the trust “prevents unlawful and premature control of KCS, allows KCS to maintain independence, and protects KCS’ financial health” during the STB review process, “all while CN remains financially strong.”

A final STB decision on the trust could come by mid-July, at the earliest. Cowen and Company believes there to be an approximately 60% chance the STB approves it, according to Managing Director and Railway Age Wall Street Contributing Editor Jason Seidl.

“A CN-KCS combination will increase customer options, enhance rail-to-rail competition with larger Class I’s, and benefit both the global environment and local communities by converting truck traffic to rail,” CN and KCS wrote in their July 6 filing. “[The] Applicants [CN and KCS] look forward to demonstrating those benefits in a comprehensive current-rules application and to participating in a robust, careful review process that will allow full stakeholder input. The only question presented to the Board now, however, is whether Applicants’ voting trust agreement satisfies the test for voting trust review established in Major Rail Consolidation Procedures. It does.”

CN and KCS explained: “Applicants demonstrated in their Motion that their proposed voting trust satisfies the Board’s test. First, it precludes premature control of KCS during the trust period. Second, approval of the proposed voting trust is in the public interest, because it causes no harms and serves the public interest, including by placing CN on equal footing with other bidders in the market for KCS.

“None of the comments on the voting trust agreement changes either conclusion. The first point is literally uncontested: No party contends that the voting trust would not fully insulate KCS from CN control during the trust period. Nor do the comments undermine Applicants’ strong public interest showing. Divestiture poses no risk of harm to KCS. The Board has oversight over the divestiture process; if CN were required to divest KCS, it will maintain KCS as an intact entity. There is no risk of financial harm to CN, either. CN’s strong balance sheet and credit rating will allow it to handle and quickly retire the debt associated with this unique transaction.”

In their filing, CN and KCS noted that the STB’s “voting trust review is focused on the voting trust and does not prejudge its ultimate merger decision.”

They also pointed out that “[t]he key factors relevant to the voting trust review strongly support approval.” Among them:
• “There is no risk of unauthorized control.”
• “No party has identified a legitimate risk of harm from the voting trust.” The railroads explained that “KCS will not be harmed by divestiture”;  “CP’s [Canadian Pacific’s] allegations that voting trust approval could cause other financial harms are baseless”; and “CP’s claims that a voting trust would create incentives for CN and KCS not to compete are meritless.” (CP filed comments with the STB on June 28 “outlining why the public interest costs of CN’s proposed voting trust outweigh the non-existent benefits.”)

The railroads also wrote in their filing that “[m]any comments raise issues not relevant” to the voting trust review. They pointed out:
• “A CN-KCS combination does not change the competitive balance of the industry and would have no negative downstream effects.”
• “Claims that CN-KCS would cause competitive harm are incorrect.” The railroads noted that “[e]nd-to-end mergers like CN-KCS pose few competitive issues”; “CN-KCS’s divestiture commitment [of a 70-mile line overlap in Louisiana] removes all concerns about ‘horizontal competition’”; “[t]he merger will enhance, not reduce, geographic competition”; and “CN-KCS’s gateway commitment eliminates all concerns about vertical foreclosure.”
• “KCS’s Shreveport-Kansas City line would be critically important to a CN-KCS combination and would not be downgraded.”
• “Amtrak’s interest in potential future passenger service over KCS’s Baton Rouge-New Orleans line is not relevant to the voting trust.”
• “Any traffic impacts from a CN-KCS combination will be fully addressed in the Board’s Environmental Review, and are not relevant to the voting trust.”
• “No rail employees are affected by the voting trust, and impacts of a CN-KCS consolidation will be thoroughly reviewed in the [merger] application.”

CN and KCS also noted that a voting trust approval “does not affect CP’s ability to present an inconsistent application if it chooses to do so.” (Filing an “inconsistent application” is a “long-standing, formalized and approved process by which CP can have its application to acquire KCS reviewed and compared and contrasted to CN’s,” KCS attorneys explained in a separate STB filing.)

In the railroads’ July 7 announcement of their filing, they reported that more than 1,750 letters of support for their combination have been submitted to the STB, including more than 1,000 specifically requesting approval of the voting trust.

“We are excited about this combination because of its potential to promote competition, growth and more choice for rail customers, port operators, employees, stakeholders and communities,” CN President and CEO JJ Ruest said. “It will also provide significant environmental benefits for North American communities. We are confident that our voting trust meets all the standards set forth by the STB and believe that, after a fair and thorough review by the STB, it should be approved.”

“CN is the ideal partner for KCS to power the resurgence of North America’s industrial and agricultural corridors and enhance competition,” KCS President and CEO Patrick J. Ottensmeyer said. “It is important that the STB approve CN’s voting trust so that the STB can receive the formal merger application and proceed with a full substantive review of the many compelling and innovative pro-competitive benefits this combination will provide for the public.”

On July 7, CP issued the following statement in response to CN and KCS’s filing:

“CN’s reply doubles down on arguments for a voting trust that CP has already shown do not meet the Board’s public interest test and sweeps under the rug the many public interest costs associated with CN’s proposed use of a trust.

“CN continues to try to limit the STB’s discretion to determine what is in the public interest, repeating its flawed rhetoric about the Board’s ‘narrow test’ and asserting that concerns raised by ‘rail labor, communities and passenger rail … are not relevant to this voting trust decision.’ CN also repeats its false assertion that CN and CP are ‘identically situated’ with respect to the relevant public interest factors, despite the fundamental differences in the public interest implications of their proposals that have already led the STB to subject the CN proposal to the 2001 merger rules and the elevated public test for voting trusts, pursuant to which approval shall be the ‘rare’ exception rather than the routine.

“CP looks forward to the Board’s decision on CN’s proposal, which will mark the next milestone in CP’s ability to present the CP/KCS alternative, which offers all the same benefits and more without any of the competitive and other costs of a CN acquisition of KCS.

“CP looks forward to offering KCS shareholders a realistic, achievable and ultimately superior path to realize the value of their stake in this proud company. On close inspection, CN’s bid remains truly illusory.”

CP reiterated that it is “continuing to pursue its application process to acquire KCS so that the pro-competitive CP-KCS combination can be reviewed by the STB and implemented without undue delay, in the event KCS’ agreement with CN is terminated or CN is otherwise unable to acquire control of KCS.”