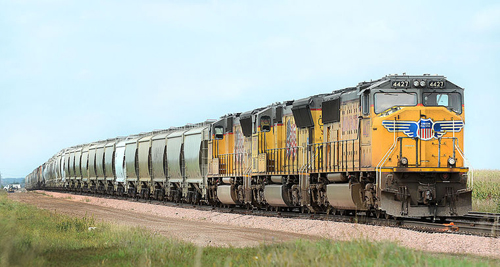 The RIO Hub is part of Rangeland’s RIO System, which serves oil and gas producers in the Delaware Basin. The 150-car unit train, operated by BNSF, carried 16,500 tons of frac sand used in hydraulic fracturing (“fracking”). Powered by five locomotives, it originated in Ottawa, Ill., BNSF handed the train off to short line Southwestern Railroad at Clovis, N.Mex., for delivery to the RIO Hub. It was Rangeland Energy’s largest single-delivery of frac sand to date. The unit train arrived on Oct. 2 and was unloaded within 22 hours. The sand was stored at the RIO Hub and will supply an operator with a large quantity of sand for high-volume fracking jobs in the Delaware Basin.

“Demand for sand in the Delaware Basin remains high, and unit train service provides a more cost-effective and reliable means of shipping large volumes of sand than manifest service,” said Rangeland Executive Vice President and Chief Operating Officer Steve Broker. “Despite the current pricing environment, the Delaware Basin remains an economic play, and producers operating in the region continue to require increasingly large volumes of frac sand to drill and complete their wells. Our goal is to serve the needs of our customers, and we are pleased to have the capacity and flexibility to receive this record-breaking unit train at RIO. Rangeland was able to accommodate the unit train’s arrival and unload it in a timely manner because we designed the RIO Hub to have the size and scale to meet the sand or oil market’s requirements in a way that increases efficiencies and reduces costs. We expect sand volumes to continue to increase as operators drill longer wells and complete larger fracs. We are well positioned to meet those needs at the RIO Hub.”

UP’s 233-car train predeeded Rangeland’s 150-car delivery by three years and tops it by 83 cars. According to information originally circulated in 2012 and provided to Railway Age by Union Pacific’s Brad Bjerk, “To date, the Mason City team has [operated] 333 sand trains without any major operating issues. These trains average 125 cars and run a DP configuration. The heaviest train ever operated on Union Pacific originated out of Mason City on Sept. 27, 2012. [Train number] MMCSAS-27 totaedl 233 cars, 32,061 [trailing] tons and 10,873 feet [in length] (that’s 2.1 miles). The DP configuration was 3 X 2 x 2 x EOT (end-of-train device). This train completed the trip to destination without incident. This is because the train was properly built in Mason City using the DP placement formula and an EOT repeater. . . . Brad Bjerk and Dirk Peterson have properly trained their work group to build and operate these trains by using the proper job aids, standard work process training resources and employee engagement.”

Editor’s note: The fact that our railroads can operate massive trains as described above and do it safely and consistenly, day in and say out, is a testament to the skills and dedication of the thousands of field employees who keep the rail network, and, by extension, our economy, moving.