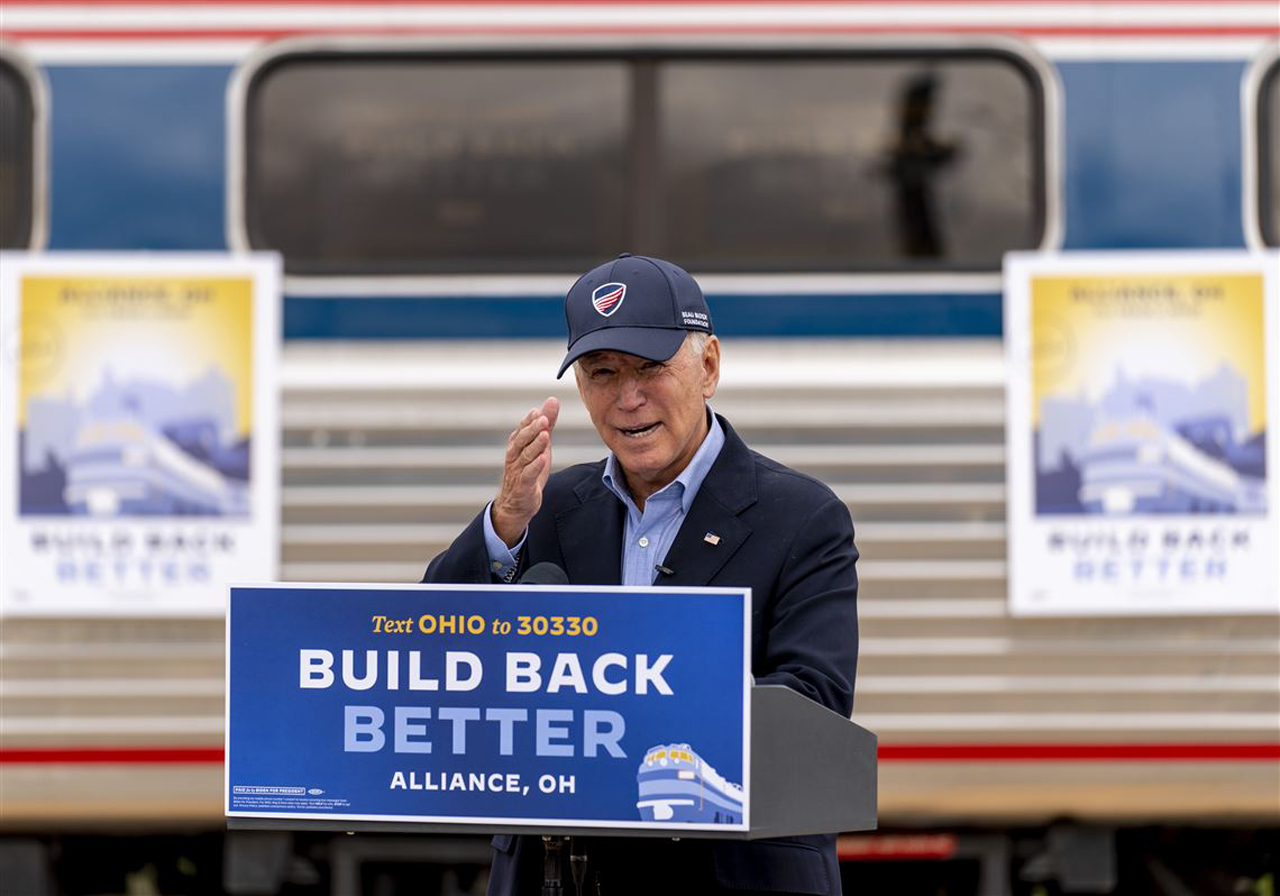 It is said of nudists that “most shouldn’t”—a conspicuous example being the naked politics of the Biden Administration in advancing a mandate—based on a political promise rather than credible safety data and understanding of how technology affects the nature of work—that train crews consist of one conductor and one engineer positioned in the locomotive cab.

Biden, boasting of being “the most pro-union President” of all time, made the promise while trolling for votes in mid-2020. In a pre-election, customized video message that mentioned by name the leadership of the International Association of Sheet Metal, Air, Rail and Transportation Workers (SMART), Biden promised its 36,000 railroad conductor members, “It’s about time our government fought for you … I’m going to keep fighting … requiring two-person crews on freight trains.” The implication: “If you vote for me, I’ll do this for you.”

Amit Bose, Biden’s choice to head the Federal Railroad Administration (FRA), wasted no time in grasping the baton from his boss. While awaiting Senate confirmation, Bose made a pilgrimage to meet with leaders of SMART’s Transportation Division (SMART-TD).

SMART-TD President Jeremy Ferguson said of the new FRA Administrator, “We are pleased and excited to continue our collaboration with Administrator Bose and the FRA as we press ahead on important safety issues such as regulating freight-crew size.” SMART-TD’s chief congressional lobbyist, Gregory Hynes, said, “We’ve had productive dialogue from the start with Administrator Bose.” In a virtual meeting with SMART-TD leaders, Bose said, “I extend my full support in joint efforts between FRA and labor.”

That full support was published in the Federal Register July 27 as a Notice of Proposed Rulemaking (NPRM) intended to fulfill Biden’s campaign promise. The safety rationale supporting it, however, is thinner than the ethics underpinning the Biden promise to a special interest.

The NPRM ignores FRA’s own studies into the success of Positive Train Control (PTC)—a $15 billion labor-supported and FRA-guided railroad investment to eliminate human-factor caused train accidents. FRA, which praises PTC for reducing train-to-train collisions, overspeed derailments and misaligned switches, alleges PTC—rather than a conductor inside the cab—could distract the engineer. Notable is that unlike aircraft, locomotives have only one set of operator controls.

The safety of single-person crews with conductors redeployed to ground-based positions has been demonstrated for years by regional, short line and passenger railroads. Class I railroads, currently required by labor agreements to maintain two-person crews, seek a collectively bargained agreement with labor to redeploy cab-based conductors to supervisor ground-based locations only where PTC is operational. The conductors would work in concert with the engineer and dispatchers, using PTC and other modern technology.

If the FRA’s July 27 NPRM is eventually finalized and survives court review, it will require the conductor remain in the locomotive cab on all Class I freight railroads—and may also require the return to the cab of conductors where for years they have been working from ground-based locations with no degradation of train safety.

Although the NPRM purports to permit redeployment of conductors from the locomotive cab via waiver, the process may be rigged against approval.

The FRA’s standards in the waiver process for Class I railroads are arguably designed to assure denial. The FRA, already with its thumb on the scale, sets itself up as the judge over what are unspecified criteria for evaluation. An example is the definition of “catastrophic.” It appears to encompass every event requiring an incident report, including derailments having nothing to do with crew activity. What FRA asserts is a path to the redeployment of conductors may well be impassable.

Moreover, the provision for waivers raises a more basic question as to why the FRA has not previously faulted railroads long operating with fewer than two crewmembers in the locomotive cab. The short answer is that there have not been safety failures.

As to the proposed waiver process for Class I railroads and others not already operating with fewer than two crewmembers in the locomotive cab, it specifically requires periodic and repeated review and renewal, invites comment from the public (with a dubious record of previously seeking to ban late-night and early-morning train horns at highway-rail grade crossings and lower train speed limits within their communities), and creates uncertainty for railroads in negotiating long-term shipper contracts.

For smaller railroads, the repeated waiver process will be particularly disruptive, requiring what FRA terms “rigorous, thorough and transparent risk assessment and hazard analysis” on top of risk assessments and crew training already required by the Code of Federal Regulations (Parts 243 and 272).

As for conductors, the NPRM is actually antithetical to improving the quality of work and life issues of which they so vehemently complain. In prohibiting carriers from reassigning conductors from the locomotive cab to ground-based positions, the NPRM also blocks railroads from providing those conductors with predictable work schedules, a return to home and family following work shifts, increased authority and responsibility over train operations, increased pay, and career protection against furlough.

Additionally, the July 27 NPRM is as factually flawed as one unsuccessfully proposed in 2016. That NPRM was the product of then-FRA Administrator Joseph Szabo, a former conductor who rose to be his union’s top Illinois lobbyist. Of note, Bose was Szabo’s deputy. Szabo’s NPRM was withdrawn in 2019 based on lack of credible safety data and written acknowledgment that a “train-crew staffing rule would unnecessarily impede the future of rail innovation and automation.”

Paying No Mind to Data

Real-time data available when the 2016 Szabo-initiated NPRM surfaced already was compelling that engineer-only operations on Class II Indiana Rail Road, some 80 Class IIIs, all commuter railroads, many segments of Amtrak, and on large freight and passenger systems in other industrialized nations, had—and still have—exemplary safety records. Yet this latest NPRM asserts that available data is insufficient to support conclusions as to the safety of engineer-only in the cab and a redeployed ground-based conductor.

One long-available study is a 2010 16-month pilot project on Los Angeles Metrolink that substituted two-person crews for single-person train operation, finding no improvement in safety as a result. Metrolink’s study cited FRA, NTSB and California Public Utilities Commission (CPUC) investigations finding two crew members in the locomotive cab “can have an unintended contrary effect on safety due to potential for distraction.” In a 2009 report, the CPUC concluded, “[a] second set of eyes provides only minimal safety improvement and should be employed only on a temporary basis, given the fact it could aggravate engineer distraction, and consequently, engineer error.”

A most condemnatory flaw in the July 27 NPRM is its haste, as recent credible safety data the FRA says has been unavailable is now in the process of being developed. But to fulfill the Biden campaign process, Bose chose not to wait. This failure to await relevant data in the pipeline before publishing an NPRM having substantial economic impact could well cause a neutral court to reject a final rule as an arbitrary exercise of power by an administrative agency.

Among data soon to be available is from a Department of Transportation (DOT)-created “Transforming Technology Advisory Committee” whose input could be crucial to understanding the interaction of new technology with the nature of work, modal-share distribution and highway safety.

The modal share and highway safety issues are not insignificant, as autonomous trucking is on the cusp of implementation, with truckers already envisioning driverless tractor-trailers over much of the Interstate Highway network. Humans would be in the tractor cab only in congested metropolitan areas, with monitoring of autonomous trucks by GPS, lasers, cameras and computers accomplished from remote locations.

With the sharp decline of bedrock coal traffic, the retention and growth of truck-competitive intermodal traffic is essential to railroad financial health—and, by extension, to those receiving paychecks and benefits from railroads. Any FRA retarding of railroads from fully utilizing PTC technology saddles rail carriers with a $15 billion investment in PTC on which there will be no productivity return, higher train operating costs and a lesser ability to compete with autonomous trucks.

In its July 27 NPRM, FRA disregards that as freight shifts from rail to truck—especially hazardous materials transport, where railroads will be absolutely prohibited from modernizing operations—highway accidents and fatalities likely will increase. Already, there are some 5,000 truck-accident related deaths annually.

The NPRM is flawed also by shunting aside a National Transportation Safety Board recommendation that FRA capture crewmember data to evaluate the adequacy of current crew-size regulations. The FRA only in March began such data collection.

FRA additionally chose not to await results of an in-progress study by the FRA in conjunction with the National Academy of Science’s Transportation Research Board into the safety of longer trains and how train length might impact redeployment of conductors.

Szabo, who tutored his deputy Bose, criticized in December 2011 congressional testimony those who “limit research to just those sources you want to hear from.” As the Szabo-led FRA nonetheless did just that in writing the 2016 NPRM, the Bose-led FRA similarly has done so in writing the 2022 NPRM. It also violates a recent Bose promise, “We are committed to data-driven decision making.”

The FRA has also avoided an effective practice of instituting pilot projects to gather safety data and a better understanding of train operation on safety. Surely a Class I railroad pilot project using ground-based conductors and designed in partnership with labor and management would have made eminent good sense in advance of publishing an NPRM.

Without question, advances in technology, automation and mechanization have affected the nature of work. In the rail industry, the introduction of diesel-electric locomotives affected employment of firemen and oilers, while other technological advances eliminated work once assigned train brakemen, flagmen, track laying and repairing Gandy dancers, and clerical forces.

Globally, robots are transforming factory floors, drones are inspecting infrastructure, the U.K. is creating aviation superhighways for autonomous drones, and self-driving vehicles are on the cusp of revolutionizing the trucking industry.

With operational PTC, conductors no longer are required to call out signals or record dispatcher directives, while other technology protects against engineer incapacitation. Duties performed when a train is stopped can be completed more efficiently by ground-based conductors. While technology cannot yet fully replace humans, human skills can be redeployed to be more efficient in partnership with technology.

The Britain-based Economist magazine terms head-before-heart soundness as “putting on trousers before leaving the house.” SMART-TD predecessor United Transportation Union recognized such logic in 2002 when negotiating conductor use of remote-control belt packs that preserved jobs and increased wages.

Collective bargaining has historically proved the better path forward than depending on politicians and their appointees in a zero-sum game where labor more often than not has lost. And you can look that up.

Railway Age Capitol Hill Contributing Editor Frank N. Wilner was formerly Director of Public Relations for SMART-TD and its predecessor United Transportation Union, Assistant Vice President for Policy at the Association of American Railroads, a White House appointed (Bill Clinton) chief of staff at the Surface Transportation Board and President of the STB Bar Association. Among his seven books are “Understanding the Railway Labor Act” and his forthcoming “Railroads and Economic Regulation,” all published by Railway Age sister company Simmons-Boardman Books.