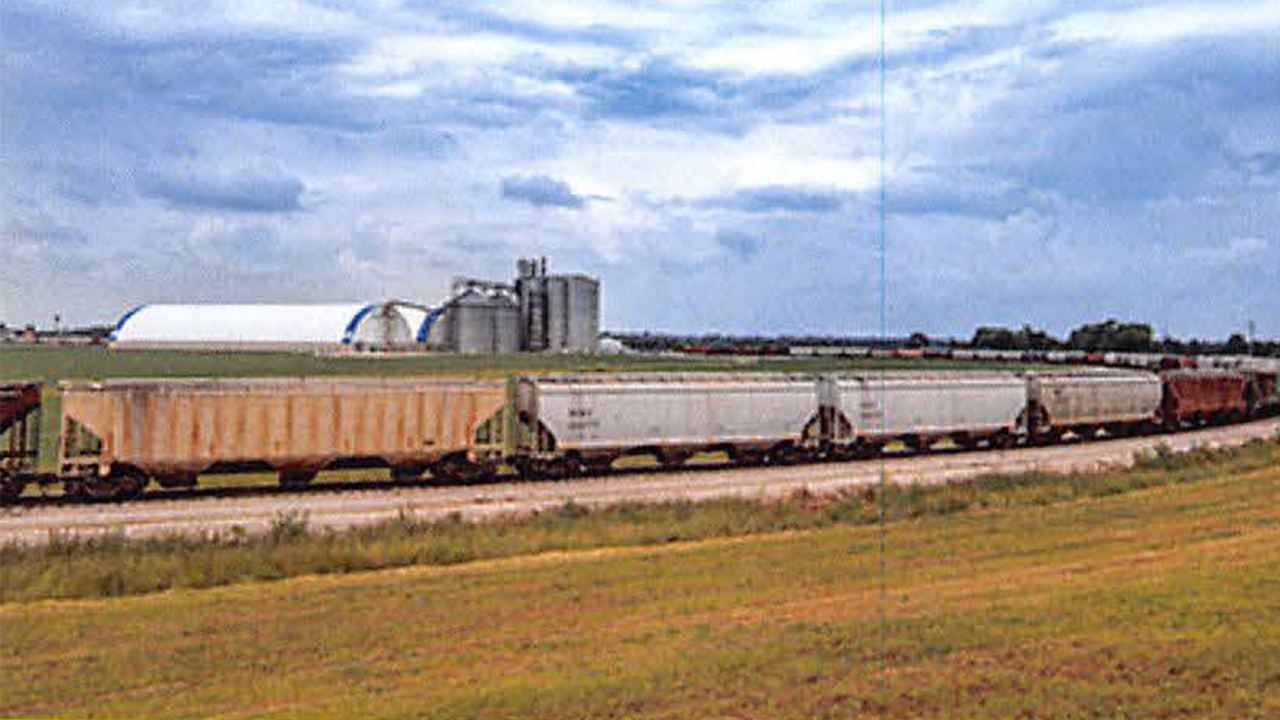 Bartlett's Jacksonville, Ill. grain facility includes a 7,000-foot-long loop and can hold up to 100 railcars.

Bob Knief, President of Bartlett Grain Co., LP (Bartlett), a leading U.S. exporter of grain to Mexico, submitted a statement on June 22 to the Surface Transportation Board (STB) to address comments and applications filed on the Canadian Pacific (CP) and Kansas City Southern (KCS) merger transaction. Specifically, Bartlett is urging the STB to approve the CPKC (Canadian Pacific Kansas City) transaction and reject CN’s requesting that KCS’s Springfield Line be divested to it.

“Bartlett supports the CP/KCS transaction, which we see as bringing important benefits to shippers, and we oppose CN’s proposal that KCS’s Kansas City-Springfield/St. Louis Line be severed from the CPKC system and sold to CN or another purchaser,” stated Knief, who is also President of the Savage Agriculture Sector. Bartlett, which was established in 1907, joined the Savage family of companies in 2018.

Among Bartlett’s facilities is a grain facility in Jacksonville, Ill., which Bartlett spent more than $25 million in 2012 to build. The facility, which includes a 7,000-foot-long rail loop and can hold up to 100 railcars, opened in August 2013 and is located on the KCS Springfield Line. Significant further investments have been made in Jacksonville since 2013 to expand capacity, according to Bartlett. CN has asked STB to divest the Springfield Line to CN, while granting haulage rights back to KCS. “Bartlett strongly opposes CN’s ‘inconsistent application’ that requests that the Board divest the Springfield Line to it,” Knief stated.

Nearly all of Bartlett’s shipments from Jacksonville go to Mexico, and the investment to support shuttle service to Mexico “was a direct move from origin to destination on KCS,” Knief said. “It was designed because that shuttle service enhances the supply chain to Mexico. Additionally, Bartlett has bought and made significant investments in three train unloading facilities in Mexico, including Aguascalientes in 2015, Cuautitlan in 2017 and San Louis Potosi in 2019. Each have been expanded since purchase to add capacity.”

Bartlett, which shipped nearly 11,000 cars from Jacksonville to Mexico on KCS last year, does not want its Mexican investments stranded by a CN takeover of the KCS line that serves its Jacksonville facility. “It would deprive us of the single-line service on KCS that we benefit from today,” said Knief. Bartlett is also concerned that CN might impose rate structures that would try to force its grain away from Mexico and other western destinations in favor of moving the grain east toward their network.

“Even if CPKC were allowed to quote rates to Mexico from Jacksonville, we would be hostage to CN’s operations and the need for a new interchange at Kansas City,” Knief stated. “The last thing that Bartlett wants, and the North American rail network needs, is to destroy the efficiency we have worked to build and invested in by unnecessarily injecting CN into this movement when it doesn’t do anything to improve or correct any aspect of the trade flow in this market. Adding an unnecessary handoff between CN and CPKC (whether CN begins to serve the plant directly or provides haulage rights to KCS) to move our grain to Mexico makes no sense when we have an efficient shuttle operation. We don’t want our single-line service to Mexico to be converted into a joint line move with haulage to Kansas City for handoff to CPKC to go to Mexico. Slowing things down by injecting extra handling and potential interchange delays is regressive.”

Bartlett says it understands that some commenters have suggested that KCS’s acquisition of control of what is now KCSM in 2005 led KCS to “foreclose” BNSF-KCSM and UP-KCSM routing options and, in effect, force shippers to choose KCS single-line options. However, Knief stated that for many of its facilities, such as Council Bluffs, Iowa, the company could choose service to Mexico via UP, BNSF or KCS, but since 2005, has directed most of its traffic to Mexico from those facilities via KCS-KCSM routes. “I can state categorically that we were never forced to choose these options. UP and BNSF options were always available to us, but we chose KCS single-line routes on the merits because they best met our transportation needs by serving our end-markets best,” stated Knief.

Bartlett reiterated that it is very interested in the approval of the CP/KCS transaction and is actively considering new investments in both the U.S. and Mexico if the transaction is approved.