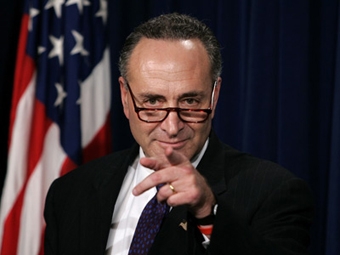 Where Sen. Blunt’s legislation, the Railroad Safety and Positive Train Control Extension Act (S. 650), would grant an across-the-board five-year extension to 2020 of the full PTC implementation deadline (the current deadline is Dec. 31, 2015), Sens. Schumer and Blumenthal’s bill, the Positive Train Control Safety Act, would grant a year-to-year extension, with a three-year maximum, and only grant an extension on a case-by-case basis.

The U.S. Senate Committee on Commerce, Science and Transportation approved Blunt’s five-year extension plan at the end of March. Sen. Blumenthal, who sits on the committee, was one of three “no” votes to the legislation. The committee did include an amendment in the legislation from Blumenthal requiring annual reporting requirements for railroads during the extension period.

Regarding the Commerce Committee’s March vote on Blunt’s PTC bill, Railway Age Contributing Editor Frank N. Wilner wrote, “Similar legislation was approved by the Commerce Committee in 2014, but it failed to reach the Senate floor. There is more urgency attached to this bill, as the PTC implementation deadline is but nine months hence.

“…Blumenthal, despite having one amendment accepted by the Commerce Committee, has 11 additional amendments he would like added, including a mandate for two-person crews, which is an unrealistic objective in this Republican controlled Senate.

“Attempts at such amendments could be made if the bill reaches the Senate floor. Majority Leader Mitch McConnell (R-Ky.) schedules floor time for votes and is unlikely to do so if he cannot obtain unanimous consent to limit the nature and number of amendments and debate. The bill also could be appended to a so-called ‘must pass’ bill, but given the political ill-will within Congress of late, even a ‘must pass’ bill is subject to adverse action, as has been witnessed by government shutdowns and near shutdowns amidst political wrangling.

“A key to unanimous consent to limit debate and the nature and number of amendments on S. 650 could be Sen. Diane Feinstein (D-Calif.), who initially led the effort to impose the Dec. 31, 2015 deadline on PTC implementation. Feinstein has yet to express herself on S. 650 [She is a co-sponsor to the Schumer/Blumenthal legislation]. A Capitol Hill source suggests that if unanimous consent cannot be obtained under the current circumstances, a compromise might be to change the extension period to one-year increments.

“It is expected that if the Senate passes S. 650, the House will vote on the Senate measure without writing its own version. Otherwise, a separate bill must move through the House, with a joint House-Senate conference committee resolving disagreements in the two measures. The clock is ticking.”