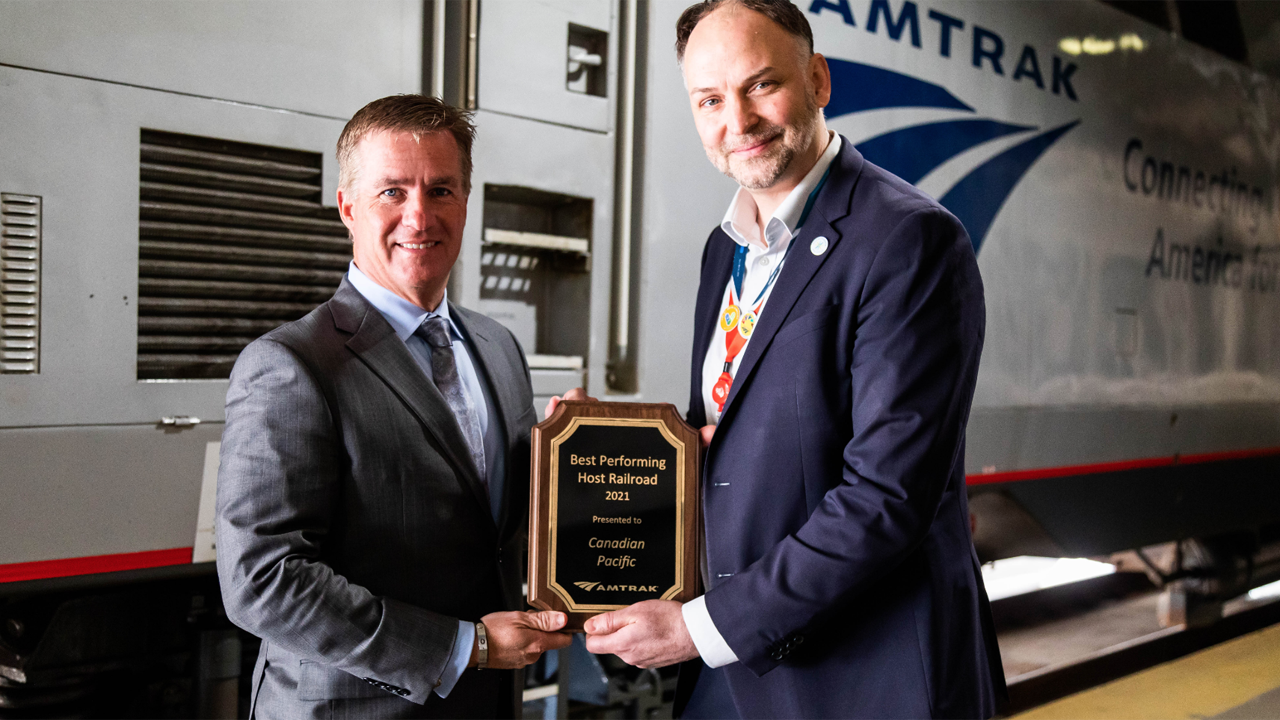 Amtrak President and CEO Stephen J. Gardner (right) recognized CP President and CEO Keith Creel with an award for earning an “A” on the Amtrak 2021 Host Railroad Report Card, which ranks Class I railroads for keeping its trains on time. The two are pictured at Amtrak Chicago Union Station.

Amtrak has issued a 2021 Host Railroad Report Card, ranking the Class I railroads for keeping Amtrak intercity passenger trains on time, and presented an award to Canadian Pacific (CP) for earning its sixth-consecutive “A” grade.

In addition to CP, CN earned an “A” (CN’s Quebec operations are excluded); BNSF received a “B+”; CSX, “B”; Union Pacific, “C+”; and Norfolk Southern, “D-.” (Kansas City Southern does not currently host Amtrak service.)

Amtrak said that it measures host railroad performance based on “minutes of host-responsible delay per 10,000 train miles,” which measures the minutes of delay caused by each host, normalized by the number of miles traveled by each train and multiplied by 10,000. Grades indicate aggregate host-responsible delays across all routes on each host; performance on specific routes can vary.

Grades are awarded on the following scale:

According to Amtrak, 900 host-responsible delay minutes per 10,000 train-miles is generally correlated to performance that results in Amtrak trains that are 80% on-time.

In 2021, freight trains caused more than 890,000 minutes of delay to passengers, Amtrak noted.

The report card also shows that only one of the 15 Amtrak long-distance routes—the City of New Orleans, which operates over CN lines—met the 80% standard (see chart, below).

Amtrak noted that the route grade tables only list Class I host railroads that host more than 15 miles of the given route.

“We’re proud of the Amtrak-CP partnership, and we applaud you and your team’s continued commitment to providing outstanding service to our passengers,” Gardner said. “Congratulations on six years straight as Amtrak’s best performing host railroad.”

“CP is honored to receive this recognition of the success we have achieved as a host railroad providing industry-leading service to Amtrak on our lines,” Creel said.

CP was also the first Amtrak host to certify schedules to measure on-time status at each Amtrak station, Amtrak reported.

In January, Gardner announced “CP’s commitment to [Amtrak’s] efforts with states and others to expand Amtrak service,” and that the two railroads had reached an “agreement formalizing CP’s support of Amtrak expansion in the Midwest and the South.” He also noted at that time: “Given CP’s consistent record as an Amtrak host, we are supporting CP’s proposal to expand its network” in a merger with KCS.

In related developments, the FRA released a report measuring the performance and service quality of Amtrak intercity passenger train operations for fourth-quarter 2021 (ending Sept. 30); and the Wisconsin and Minnesota departments of transportation are moving ahead on the Twin Cities-Milwaukee-Chicago (TCMC) Intercity Passenger Rail Project following receipt of a $31.8 million federal grant.